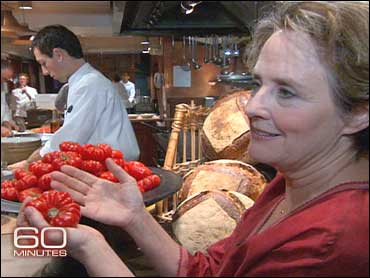 When it comes to food, Alice Waters is a legend. At age 65, she has done more to change how we Americans eat, cook and think about food than anyone since Julia Child.

Waters was only 27 years old in 1971 when she opened her French bistro Chez Panisse in Berkeley, Calif., today considered one of the finest restaurants not just in the United States but in the world.

Waters has produced eight cookbooks, but she's more famous as the mother of a movement that preaches about fresh food grown in a way that's good for the environment. The movement, now called "slow food," is a healthy alternative to "fast food."

You might think this appeals only to the Prius-driving, latte-sipping upper crust, but Waters' ideas have gone mainstream, as 60 Minutes correspondent Lesley Stahl found out when this story first aired in March.


It all started at Waters' culinary temple, Chez Panisse. She still shows up almost every day, as she has for the last 37 years, to oversee the cooking with her exquisite, infallible taste buds.

It's not just the cooking that has made her famous: it's the ingredients. She was one of the first to serve antibiotic and hormone free meats and insist on fresh, organic, locally-grown fruits and vegetables.

"I guess I do now, but when I started Chez Panisse I wasn't thinking of a philosophy about organic and sustainable. I just was looking for flavor," Waters replied.

It's flavor that comes from serving only seasonal food, one of her hallmarks; say "frozen" and Alice Waters shudders. Because all her food has to be fresh, she buys only from local ranchers, fishermen and farmers.

People who meet Waters are struck by how gentle and dreamy she seems to be, and they wonder how someone like that became so successful. Truth is, Alice Waters is a steamroller, relentlessly going after what she wants. And now she wants everyone to cook the way she does. And that has put her in the spotlight

"People have become aware that way that we've been eating is making us sick," she said.

She has become the leader of a movement to change how we eat. And she's getting traction. Now you can go to your neighborhood grocery store - even Wal-Mart - and buy organic. But in the process, she's become a target.

"People say Alice Waters is self-righteous and elitist. And these are words I've heard over and over," Stahl pointed out.

"I feel that good food should be a right and not a privilege and it needs to be without pesticides and herbicides. And everybody deserves this food. And that's not elitist," Waters argued.

Even as a little girl, Waters says she had a keen sense of taste. But what turned her into a cook was going to France in 1965 and eating simple and healthy country food. She had her epiphany.

Back at Berkeley, she was an activist involved in movements: anti-war, free speech, women's rights. But what she really loved was cooking, and feeding her friends. And she still does.

One day last August, she took 60 Minutes to a Mexican food stall in San Francisco where friends of hers were making slow food to go with organic corn and lots of spices.

You realize two things when you travel around with Alice Waters: one is that deep down she loves it when people eat, and two, it is that you can't resist her.

San Francisco Mayor Gavin Newsom, a Waters disciple, told Stahl, "She has, I think, done more to change our eating habits for the better than anyone in the United States of America."

He agreed that obesity is a huge issue now. "We consume lousy food. This is killing us. I mean it really is. We have a drinking and eating problem in this country, not just in San Francisco. And this whole movement to me is the antidote for that."

Waters talked Newsom into letting her organize a "slow food" festival outside City Hall last September. Growing the slow food movement is one of her passions: she was ecstatic that 85,000 people showed up.

She walked Stahl through the taste pavilions, introducing her to her acolytes: organic cheese merchants and bakers.

The centerpiece of the event was a sprawling, urban victory garden - a real vegetable garden in front of City Hall. Waters called it "the ultimate symbolism."

The garden, Waters' idea, was planted to encourage people to grow their own.

She brought Stahl over to one of her favorite local farmers, John Lagier, who uses only eco-friendly, or as Waters would say, "sustainable" methods. That day he was showing off his specialty grapes, Bronx seedless, which he was selling at $4 a pound.

There's the rub. A common complaint about organic food is that it's expensive.

"We make decisions everyday about what we're going to eat," Waters said. "And some people want to buy Nike shoes - two pairs, and other people want to eat Bronx grapes, and nourish themselves. I pay a little extra, but this is what I want to do."

To prove to Stahl that healthy, slow food is worth the money, and can be fast and easy, she invited her to her house for breakfast.

She was going to cook some eggs and make a salad with tomatoes. It was at the house that Stahl realized that Waters lives in a different world - for one, she doesn't have a microwave.

Asked how she lives without one, Waters replied, "I don't know how you can sort of live with one."

But how many stressed out working mothers have this kind of patience in the morning? She chopped up chives, diced up tomatoes, and marinated them in olive oil and garlic.

Waters told Stahl she rarely goes into a regular supermarket. "I'm looking for food that's just been picked. And so, I know when I go the farmer's market that you know, they just brought it in that day."

"I have to say, it's just a luxury to be able to do that," Stahl remarked.

"In a sense it is a luxury," Waters agreed.

A luxury that's delectable: once she spread the ripe tomatoes and Tuscan olive oil on a slab of organic bread, she started on the eggs.

Her cooking "equipment" includes a fireplace in her kitchen.

Not sure if it was the roaring fire in the kitchen or the "fast and easy" part - is she kidding? But Stahl said it was one of the best breakfasts of her life.

Waters is already trying to influence the next generation by creating another garden, something she calls "The Edible Schoolyard."

"This is an effort to bring kids into a new relationship to food," she explained.

Waters got a local middle school in Berkeley to create a course where kids learn about growing food right on the school grounds.

The students told Stahl they were planting strawberries and cultivating the bed; one kid says it was the most fun class he had.

They also thought they were learning something important. "We're learning about compost, crab grass, how to raise [a] good healthy garden," one boy told Stahl.

"You know it's kind of a thrill every time I come here. I think I just want to get my hands in the soil," Waters told Stahl. "I want to go down on my hands and knees and be a child again."

The garden is just half of the program. The kids also learn how to cook what they've grown. For many of the kids it's the first time they've cooked and eaten fresh, organic food.

"Did you ever cook anything that you thought before, oh my god, I'd never eat anything…like that in a million [years]?" Stahl asked the children.

"Oh yeah. This one thing with toast and then there's spinach and mushrooms on top of it. I thought I would hate it but it was really good," one student told Stahl.

If Waters had her way, there'd be a program like this in every single school.

"In these times it needs to be spread more than ever," Waters argued. "That children would grow up knowing how to cook. This is something that we don't know how to do anymore."

"But can we afford it? I guess that's what I'm asking," Stahl said.

"But we can't not afford it," Waters argued.

She did agree with the notion that she's a dreamer.

But to others she's a visionary. Now she has her sights on a new project and we would like to warn President Obama that the steamroller is on its way.

"You have been pushing for a vegetable garden at the White House for years. Rose garden? Forget that. You want a broccoli garden?" Stahl asked.

"I have been talking nonstop about the symbolism of an edible landscape at the White House. I think it says everything about stewardship of the land and about the nourishment of a nation," Waters said.

Asked if she thinks she'll achieve such a garden at the White House, Waters told Stahl, "Well, I'm very hopeful. I've always liked the idea of doing press conferences at the compost heap."

Five days after this story first aired, Michelle Obama broke ground for a garden on the South Lawn of the White House. It's 1,100 square feet, with organic herbs, fruits and vegetables.