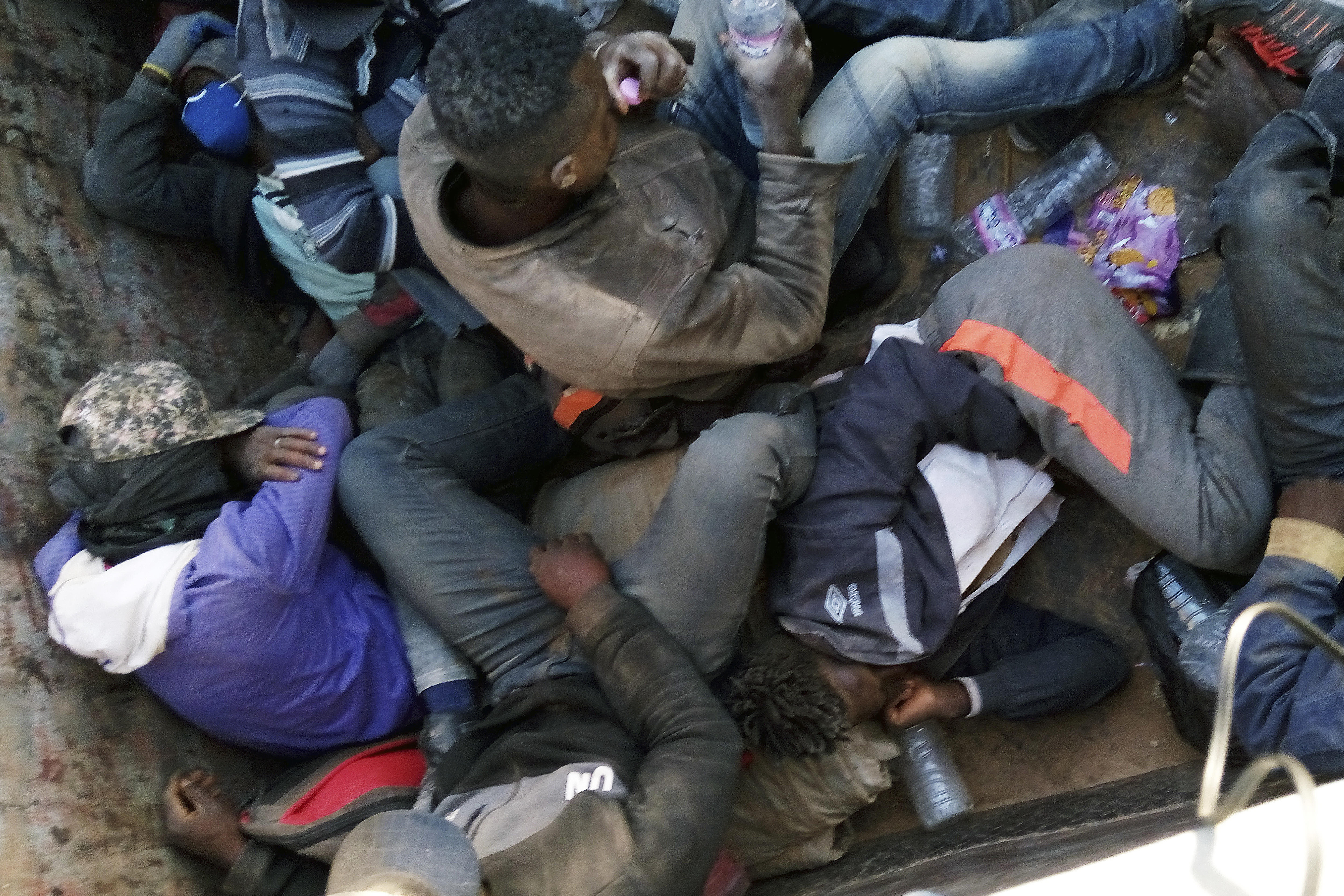 ASSAMAKA, Niger -- From this isolated frontier post deep in the sands of the Sahara, the expelled migrants can be seen coming over the horizon by the hundreds. They look like specks in the distance, trudging miserably across some of the world's most unforgiving terrain in the blistering sun. They are the ones who made it out alive.

Here in the desert, Algeria has abandoned more than 13,000 people in the past 14 months, including pregnant women and children, stranding them without food or water and forcing them to walk, sometimes at gunpoint, under temperatures of up to 118 degrees Fahrenheit.

In Niger, where the majority head, the lucky ones limp across a desolate 9-mile no-man's-land to Assamaka, less a town than a collection of unsteady buildings sinking into drifts of sand. Others, disoriented and dehydrated, wander for days before a U.N. rescue squad can find them. Untold numbers perish along the way; nearly all the more than two dozen survivors interviewed by The Associated Press told of people in their groups who simply could not go on and vanished into the Sahara.

"Women were lying dead, men..... Other people got missing in the desert because they didn't know the way," said Janet Kamara, who was pregnant at the time. "Everybody was just on their own."

Her body still aches from the dead baby she gave birth to during the trek and left behind in the Sahara, buried in a shallow grave in the molten sand. Blood streaked her legs for days afterward, and weeks later, her ankles are still swollen. Now in Arlit, Niger, she is reeling from the time she spent in what she calls "the wilderness," sleeping in the sand.

Quietly, in a voice almost devoid of feeling, she recalled at least two nights in the open before her group was finally rescued, but said she lost track of time.

"I lost my son, my child," said Kamara, a Liberian who ran her own home business selling drinks and food in Algeria and was expelled in May.

Another woman in her early twenties, who was expelled at the same time, also went into labor, she said. That baby didn't make it either.

Algeria's mass expulsions have picked up since October 2017, as the European Union renewed pressure on North African countries to head off migrants going north to Europe via the Mediterranean Sea or the barrier fences with Spain. These migrants from across sub-Saharan Africa - Mali, the Gambia, Guinea, Ivory Coast, Niger and more - are part of the mass migration toward Europe, some fleeing violence, others just hoping to make a living.

A European Union spokesperson said the EU was aware of what Algeria was doing, but that "sovereign countries" can expel migrants as long as they comply with international law. Unlike Niger, Algeria takes none of the EU money intended to help with the migration crisis, although it did receive $111.3 million in aid from Europe between 2014 and 2017.

Algeria provides no figures for the expulsions. But the number of people crossing on foot to Niger has been increasing steadily since the International Organization for Migration started counting in May 2017, when 135 people were dropped at the crossing, to as high as 2,888 in April 2018. In all, according to the IOM, a total of 11,276 men, women and children survived the march.

At least another 2,500 were forced on a similar trek this year through the Sahara into neighboring Mali, with an unknown number succumbing along the way.

The migrants the AP talked to described being rounded up hundreds at a time, crammed into open trucks headed southward for six to eight hours to what is known as Point Zero, then dropped in the desert and pointed in the direction of Niger. They are told to walk, sometimes at gunpoint. In early June, 217 men, women and children were dropped well before reaching Point Zero, fully 30 kilometers (18 miles) from the nearest source of water, according to the IOM.

Within seconds of setting foot on the sand, the heat pierces even the thickest shoes. Sweat dries upon the first touch of air, providing little relief from the beating sun overhead. Each inhalation is like breathing in an oven.

But there is no turning back.

"There were people who couldn't take it. They sat down and we left them. They were suffering too much," said Aliou Kande, an 18-year-old from Senegal.

Kande said nearly a dozen people simply gave up, collapsing in the sand. His group of 1,000 got lost and wandered from 8 a.m. until 7 p.m., he said. He never saw the missing people again. The word he returned to, over and over, was "suffering."

Kande said the Algerian police stole everything he had earned when he was first detained - 40,000 dinars ($340) and a Samsung cell phone.

"They tossed us into the desert, without our telephones, without money. I couldn't even describe it to you," he said, still livid at the memory.

The migrants' accounts are confirmed by multiple videos collected by the AP over months, which show hundreds of people stumbling away from lines of trucks and buses, spreading wider and wider through the desert. Two migrants told the AP gendarmes fired on the groups to force them to walk, and multiple videos seen by the AP showed armed, uniformed men standing guard near the trucks.

"They bring you to the end of Algeria, to the end in the middle of the desert, and they show you that this is Niger," said Tamba Dennis, another Liberian who was in Algeria on an expired work visa. "If you can't bring water, some people die on the road." He said not everyone in his group made it, but couldn't say how many fell behind.

Ju Dennis, another Liberian who is not related to Tamba, filmed his deportation with a cell phone he kept hidden on his body. It shows people crammed on the floor of an open truck, vainly trying to shade their bodies from the sun and hide from the gendarmes. He narrated every step of the way in a hushed voice.

Even as he filmed, Ju Dennis knew what he wanted to tell the world what was happening.

"You're facing deportation in Algeria - there is no mercy," he said. "I want to expose them now...We are here, and we saw what they did. And we got proof."

Algerian authorities refused to comment on the allegations raised by the AP. Algeria has denied criticism from the IOM and other organizations that it is committing human rights abuses by abandoning migrants in the desert, calling the allegations a "malicious campaign" intended to inflame neighboring countries.

Along with the migrants who make their way from Algeria to Niger on foot, thousands more Nigerien migrants are expelled directly home in convoys of trucks and buses. That's because of a 2015 agreement between Niger and Algeria to deal with Nigeriens living illegally in their neighbor to the north.

Even then, there are reports of deaths, including one mother whose body was found inside the jammed bus at the end of the 280-mile journey from the border. Her two children, both sick with tuberculosis, were taken into custody, according to both the IOM and Ibrahim Diallo, a local journalist and activist.

The journey from Algeria to Niger is essentially the reverse of the path many in Africa took north - expecting work in Algeria or Libya or hoping to make it to Europe. They bumped across the desert in Toyota Hilux pickups, 15 to 20 in the flatbed, grasping gnarled sticks for balance and praying the jugs of water they sat upon would last the trip.

The number of migrants going to Algeria may be increasing as an unintended side effect of Europe's successful blocking of the Libyan crossing, said Camille Le Coz, an analyst at the Migration Policy Institute in Brussels.

But people die going both ways; the Sahara is a swift killer that leaves little evidence behind. The arid heat shrivels bodies, and blowing sand envelops the remains. The IOM has estimated that for every migrant known to have died crossing the Mediterranean, as many as two are lost in the desert - potentially upwards of 30,000 people since 2014.

The vast flow of migrants puts an enormous strain on all the points along the route. The first stop south is Assamaka, the only official border post in the 590-mile border Algeria shares with Niger.

Even in Assamaka, there are just two water wells - one that pumps only at night and the other, dating to French colonial times, that gives rusty water. The needs of each wave of expelled migrants overwhelm the village - food, water, medicine.

"They come by the thousands....I've never seen anything like it," said Alhoussan Adouwal, an IOM official who has taken up residence in the village to send out the alert when a new group arrives. He then tries to arrange rescue for those still in the desert. "It's a catastrophe."

In Assamaka, the migrants settle into a depression in the dunes behind the border post until the IOM can get enough buses to fetch them. The IOM offers them a choice: Register with IOM to return eventually to their home countries or fend for themselves at the border.

Some decide to take their chances on another trip north, moving to The Dune, an otherworldly open-air market a few kilometers away, where macaroni and gasoline from Algeria are sold out of the back of pickups and donkey carts. From there, they will try again to return to Algeria, in hopes of regaining the lives and jobs they left behind. Trucks are leaving all the time, and they take their fare in Algerian dinars.

The rest will leave by bus for the town of Arlit, about 6 hours to the south through soft sand.

In Arlit, a sweltering transit center designed for a few hundred people lately has held upwards of 1,000 at a time for weeks on end.

"Our geographical position is such that today, we are directly in the path of all the expulsions of migrants," said Arlit Mayor Abdourahman Mawli. Mawli said he had heard of deaths along the way from the migrants and also from the IOM. Others, he said, simply turned right round and tried to return to Algeria.

"So it becomes an endless cycle," he said wearily.

One man at the center with scars on his hands and arms was so traumatized that he never spoke and didn't leave. The other migrants assumed he had endured the unspeakable in Algeria, a place where many said they had been robbed and beaten by authorities. Despite knowing nothing about him, they washed and dressed him tenderly in clean clothes, and laid out food so he could eat. He embarked on an endless loop of the yard in the midday sun.

With no name, no confirmed nationality and no one to claim him, the man had been in Arlit for more than a month. Nearly all of the rest would continue south mostly off-road to Agadez, the Nigerien city that has been a crossroads for African trade and migration for generations. Ultimately, they will return to their home countries on IOM-sponsored flights.

In Agadez, the IOM camps are also filling up with those expelled from Algeria. Both they and the mayor of Agadez are growing increasingly impatient with their fate.

"We want to keep our little bit of tranquility," said the mayor, Rhissa Feltou. "Our hospitality is a threat to us."

Even as these migrants move south, they cross paths with some who are making the trip north through Agadez.

Every Monday evening, dozens of pickup trucks filled with the hopeful pass through a military checkpoint at the edge of the city. They are fully loaded with water and people gripping sticks, their eyes firmly fixed on the future.