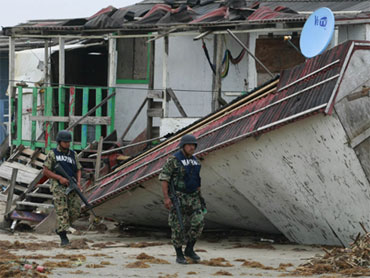 The sprawling remains of Hurricane Alex drenched much of northern Mexico on Thursday, paralyzing the major city of Monterrey. At least two people were killed when dry rivers roared to life and highways turned into rushing streams.

Hurricane Alex ripped off roofs, caused severe flooding and forced thousands of people to flee coastal fishing villages as it hit land Wednesday evening in the border state of Tamaulipas. Power and telephone service were down in several towns and cities.

The storm weakened to a tropical storm Thursday as it moved west to Nuevo Leon state, but it still caused major problems.

The dry Santa Catalina river that cuts through Monterrey roared to life, sweeping away cars and parts of rickety, wooden homes built along its path.

One man died when he was caught by a torrent of water along a six-lane highway, city Civil Protection director Pedro Trevino told Televisa Monterrey network. Another man was founded drowned by side of a creek.

Nuevo Leon state Gov. Rodrigo Medina de la Cruz told the Televisa he had ordered all schools closed and appealed for people to stay home from all but essential jobs. The U.S. Consulate in Monterrey also closed due to the storm.

Crews swept up debris in Matamoros, a city across the border from Brownsville, Texas. Emergency officials still had to use boats to surveyed the damage in some neighborhood.

Most of the 2,500 people who stayed in shelters overnight boarded buses back to their coastal villages Thursday after lining up for breakfast served by marines.

"The city is practically under water," said Saul Hernandez Bautista. "But the most important thing is that there was no loss of life. We took important and opportune measures to evacuate people."

Raging winds knocked down hundreds of trees, telephone posts and traffic lights in the Matamoros area and farther south along Mexico's northern Gulf coast. Power and telephone service was out in San Fernando, a town near where Alex made landfall, and in the state capital of Ciudad Victoria.

Abel Ramirez of San Fernando's Civil Protection and Fire Department said seven fishing villages, with a combined population of about 5,000, were evacuated.

But there were no reports of injuries. "We're better," Ramirez said as he surveyed the damage.

The Mexican Navy reported Thursday that it had rescued seven people Wednesday from a fishing boat that ran aground on the remote, low-lying Gulf island of Cayo Nuevo, about 130 miles off the Mexican coast, amid high waves and heavy rain.

The Navy said the shipwreck was "presumably because of the effects of the remnants of Tropical Storm Alex." The fishermen had to be pulled off the key by rescue divers.

The Atlantic season's first hurricane largely spared nearby Texas, which had prepared for a possible direct hit. While it brought rain, spawned two tornadoes and caused 1,000 people to evacuate low-lying areas there, state officials reported no injuries or major damage.

More than 1,000 people who packed shelters in Hidalgo and Cameron nearly all left back for home at daybreak. American Electrical Power reported that fewer than 2 percent of customers were without power, a mere blip compared to the 211,000 homes blacked out when Hurricane Dolly thundered ashore two years ago.

At 4 p.m. CDT, Alex was 95 miles west of Zacatecas, Mexico. It had maximum sustained winds of 40 mph and was expected to dissipate overnight.

It was the first June hurricane in the Atlantic since 1995, according to the hurricane center.

Earlier, Alex whipped up high waves that frustrated oil-spill cleanup efforts on the other side of the Gulf of Mexico and delivered tar balls and globs of crude onto already soiled beaches.