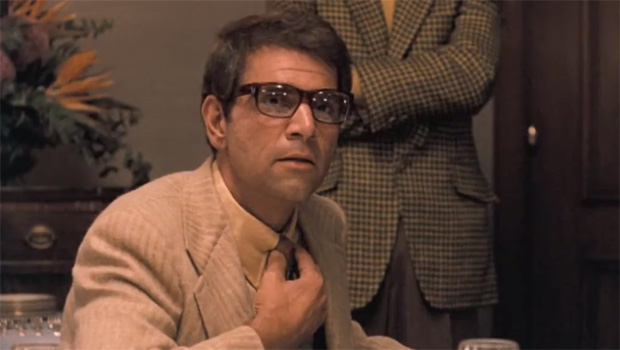 Alex Rocco, an Emmy Award-winning character actor best known for portraying mobster Moe Greene in "The Godfather," died on Saturday. He was 79.

His death was announced by his daughter, Jennifer Rocco, on her Facebook page.

Rocco won an Emmy in 1990 as Outstanding Supporting Actor in a Comedy Series, portraying Hollywood agent Al Floss opposite Jon Cryer in "The Famous Teddy Z."

(It was a character that Rocco also played in a guest appearance on another sitcom, "Murphy Brown.")

But it was as Las Vegas casino owner Moe Greene that Rocco is best known -- both for brazenly disrespecting Michael Corleone ("I made my bones when you were going out with cheerleaders!") and for his spectacular end, when he is shot in the eye while putting on his glasses.

His death scene in "The Godfather" required some technical ingenuity. Using the thick-framed glasses the character wore, special effects man A.D. Flowers rigged two small tubes running along from behind Rocco's head, using air pressure in one tube to blow a tiny BB at high speed outward through the breakaway glass, while another tube spurted out blood -- a lot of it.


Born in Cambridge, Mass., on Feb. 29, 1936, Alessandro Federico Petricone, Jr. was a bookie with the Winter Hill Gang in Boston. In 2012 he told the Onion's AV Club that in 1961, after getting into some trouble (which just happened to precipitate a gang war), he had to get out of town, and flipped a coin: "Heads Miami, tails California."

Tails, it was. In California Rocco took acting lessons from Leonard Nimoy (who recommended voice lessons to lose his strong Boston accent). He "stole" his first job when, working at a bar on Santa Monica Blvd., he picked up a phone call from 20th Century Fox trying to track down an actor and talked his way into the job instead.

After starring in the short-lived 1975 TV series, "Three For the Road," he played the father of Nancy McKeon in "The Facts of Life." He also played the father of McKeon's characters in the sitcom "Can't Hurry Love" and the police series "The Division." He was also featured in "The George Carlin Show," and provided the voice of Roger Meyers Jr. on "The Simpsons."

To watch Moe Greene (Alex Rocco) "talk business" with Michael Corleone (Al Pacino) in "The Godfather" click on the player below.