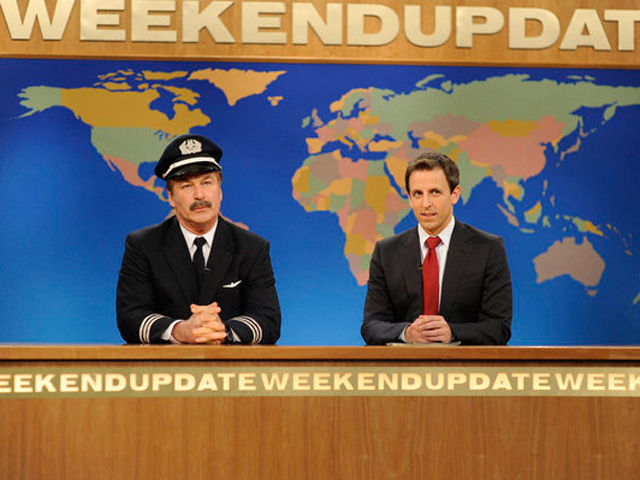 (CBS) Lest you thought the Alec Baldwin-American Airlines feud was over, think again - the actor has taken the war of words to "Saturday Night Live."

Baldwin made a cameo on the show Saturday night posing as the pilot on the American Airlines flight he was removed from last week, reportedly for refusing to turn off his cell phone while playing "Words with Friends."

The "30 Rock" actor, dressed as the mustachioed Captain Steve Rogers, used the opportunity to issue an apology - to himself.

"It was awful Seth," he drawled to "Weekend Update" anchor Seth Meyers of the plane incident. "Which is why it was important for me to come tonight here and, on behalf of everyone at American Airlines, issue an apology to Mr. Alec Baldwin!"

"Mr. Baldwin is an American treasure, and I am ashamed at the way he was treated," he added.

Baldwin, as Capt. Rogers, also told Meyers that "Words with Friends" is a game for smart people and scoffed at the rules about not using electronic devices on airplanes.

Watch the full sketch below: