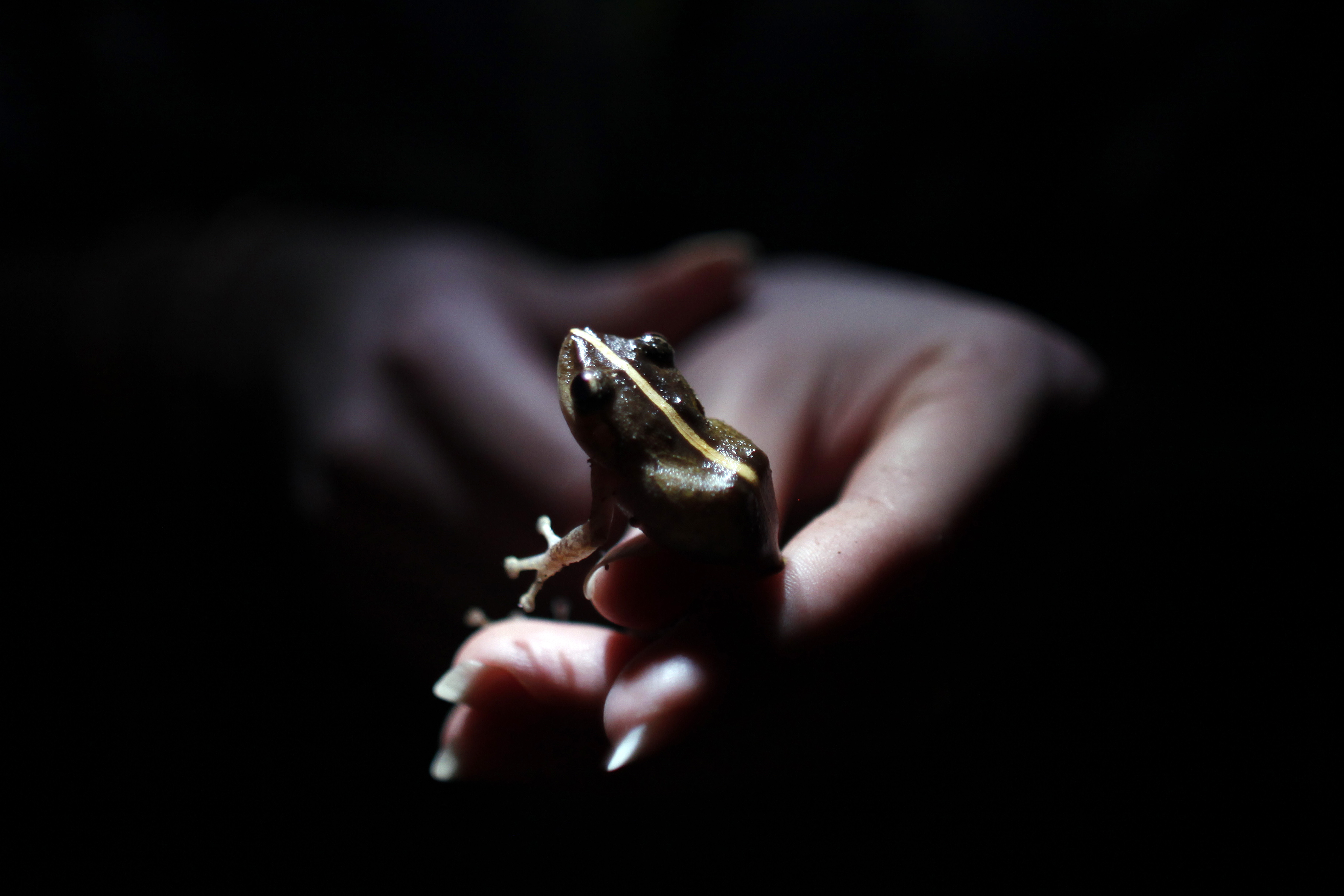 PATILLAS, Puerto Rico A curtain of sound envelops the two researchers as they make their way along the side of a mountain in darkness, occasionally hacking their way with a machete to reach the mouth of a small cave.

Peeps, tweets and staccato whistles fill the air, a pulsing undercurrent in the tropical night. To the untrained ear, it's just a mishmash of noise. To experts tracking a decline in amphibians with growing alarm, it's like a symphony in which some of the players haven't been showing up.

In parts of Puerto Rico, for example, there are places where researchers used to hear four species at once and they are now hearing one or two, a subtle but important change.

"You are not hearing what you were before," said Alberto Lopez, part of a husband-and-wife team of biologists trying to gauge the health of frogs on the island.

Scientists report that many types of amphibians, especially frogs, are in a steep global decline likely caused by a mix of habitat loss, climate change, pollution and a virulent fungus. The downward spiral is striking particularly hard in the Caribbean, where a majority of species are now losing a fragile hold in the ecosystem.

Without new conservation measures, there could be a massive die-off of Caribbean frogs within 15 years, warned Adrell Nunez, an amphibian expert with the Santo Domingo Zoo in the Dominican Republic. "There are species that we literally know nothing about" that could be lost, he said.

Researchers such as Lopez and his wife, Ana Longo Berrios, have been fanning out across the Caribbean and returning with new and troubling evidence of the decline. In some places, especially in Haiti, where severe deforestation is added to the mix of problems, extinctions are possible.

It is part of a grim picture overall. The International Union for the Conservation of Nature has found that 32 percent of the world's amphibian species are threatened or extinct, including more than 200 alone in both Mexico and Colombia.

"Everywhere we are seeing declines and it's severe," said Jan Zegarra, a biologist based in Puerto Rico for the U.S. Fish and Wildlife Service.

Frogs may be less charismatic than some other troubled species, but their role in the environment is important. They are consumed by birds and snakes and they in turn are major predators of mosquitoes. Their absence could lead to a rise in malaria and dengue, not to mention discomfort.

There are also less tangible reasons for protection. The coqui, the common name for a genus that includes 17 species in Puerto Rico, including three believed to be already extinct, is important to the cultural heritage of the island; it's considered a symbol of the island, seen in everything from indigenous petroglyphs to coffee mugs sold to tourists at the airport. Frogs, which breathe and process toxins through their skin, are considered a promising area for pharmaceutical research and a bio-indicator that can tell scientists about what's going on in the environment.

"We are just starting to understand the ripple down effects and the repercussions of losing amphibians," said Jamie Voyles, a biologist at New Mexico Tech in Albuquerque and one of the principal investigators of Project Atelopus, an effort to study and protect frogs of an endangered genus in Panama.

Rafael Joglar, a biologist at the University of Puerto Rico, has noted the diminishing nighttime calls in decades of research on the island and not just from the three species believe to have gone extinct. "Many of the other species that were common when I was a younger student ... are now disappearing and are actually very rare."

In percentage terms, the worst situation for frogs is the Caribbean, where more than 80 percent of species are threatened or extinct in the Dominican Republic, Cuba and Jamaica and more than 90 percent in Haiti, according to the International Union for the Conservation of Nature. In Puerto Rico, it's around 70 percent.

"The frogs in the Caribbean are in very bad shape," Joglar said.

One major reason the Caribbean is so vulnerable is that many species are found only within a small habitat on just one island. Take, for example, the coqui guajon, or rock frog, which was the focus of attention by Lopez and Longo on a recent night. About the size of a golf ball, it is what's known as a habitat specialist, found only in caves of a certain kind of volcanic rock along streams in southeastern Puerto Rico.

There are 17 known spots designated by the U.S. Fish and Wildlife Service as critical habitat for the rock frog, all of them on private land. Longo and Lopez, working for a research and public education initiative called Proyecto Coqui, have been trying to determine the health of the populations on those isolated patches.

"That's why it's such a vulnerable species," Lopez said. "If something happens to the habitat, people can't just grab them and put them in another place on the island because this habitat is only found on the southeast of the island."

In densely populated Haiti, the degradation of the environment has been so severe that only a handful of species are known for certain to still be viable in the country and even they are in trouble, said S. Blair Hedges, a biology professor at Pennsylvania State University who has studied frogs in the Caribbean since the 1980s.

"I'm really certain that some species are going over the edge, are disappearing," Hedges said.

Frogs have been under siege around the world from a fungus called Batrachochytrium dendrobatidis, known for short as "Bd," which has been known to be weakening and killing amphibians since the late 1990s though much about it remains under scientific study, Voyles said. Its effects, however, are dramatic.

"When I first went to Panama the sounds at night were incredible and now it's just silent," she said. "It's hard to communicate the absence of that incredible cacophony of beautiful sounds. It's very striking how much we have lost."

Among research efforts on the fungus is one by Lopez and Longo, who have been catching frogs in the forest, checking them for Bd and ticks, and then releasing them back into the night. They have started finding the fungus in the coqui guajon and are still trying to determine how it will affect the population.

After three weeks on the winding back roads of Puerto Rico, politely knocking on people's doors to ask if they could root around on their land for frogs, the researchers were relieved to find plentiful specimens. But they were also dismayed to confirm that one place designated as critical habitat had not a single coqui guajon left.

"To our surprise, the habitat is there, but no frogs, no frogs at all," he said.