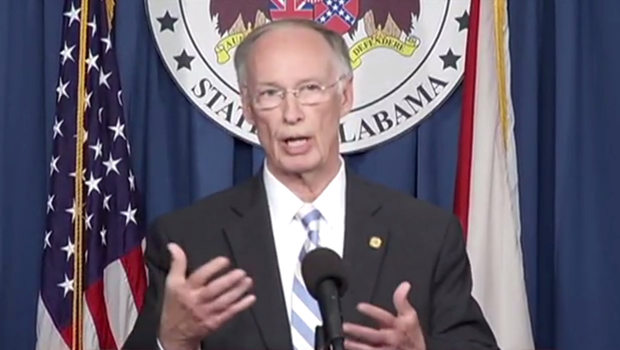 Alabama Gov. Robert Bentley filed a lawsuit seeking to block the release of a potentially embarrassing report related to a sex scandal that has led to an effort to impeach him.

In the lawsuit, Bentley calls the impeachment process “fundamentally unfair” and asks a court to block the release of the report by the Judiciary Committee’s special counsel.

He vowed again Friday he won’t resign even as his political troubles mounted and lawmakers said they would move forward with impeachment hearings because of a sex scandal.

The 74-year-old governor hastily called a news conference in which he apologized to his constituents. “There is no doubt I have let you down,” he said. He said he has worked hard to move past “any mistakes” through his salvation in Jesus.

Bentley has been engulfed in scandal since recordings surfaced in 2016 of him making suggestive remarks to a female aide before his divorce. Bentley has acknowledged making personal mistakes but maintained he did nothing illegal or to merit his removal from office.

On Friday, he continued to deny any wrongdoing. “I have done nothing illegal. If the people want to know if I misused state resources, the answer is simply no. I have not,” Bentley said.

Bentley criticized unnamed people for “taking pleasure in shaming” him and his family.

“The people of this state have never asked to be told of or shown the intimate embarrassing details of my personal life and my personal struggles,” Bentley said.

“I hope the governor does what is best for the state and seriously considers stepping down,” state Senate Pro Tem Del Marsh said Thursday. “I don’t think it does us any good to have the House go through these impeachment proceedings.”

Bentley also said Thursday he would not resign.

Efforts to impeach Bentley have gathered steam for months, and the House Judiciary Committee is scheduled to hold its first hearing on the matter Monday. Committee Chairman Mike Jones said Thursday that lawmakers should prepare for a long week.

The top lawyer in the impeachment investigation said last month that he would release a report of his findings to the House Judiciary Committee and the public on Friday.

“What I’m hearing is the report is going to be extremely embarrassing for us as a state,” said Rep. Ed Henry, the lawmaker who spearheaded the impeachment articles.

Ross Garber, the lawyer representing Bentley in the impeachment investigation, has urged lawmakers to be cautious. Garber said that since 1929 only two governors have been removed by impeachment and both were under criminal indictment.

“What you saw yesterday, and the consequences of it, are not the kinds of things that result in impeachment of a governor,” Garber said. “It’s not.”