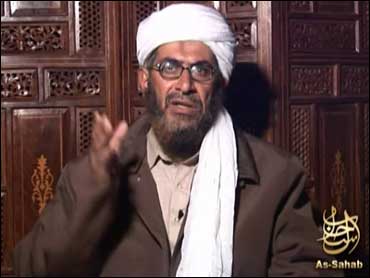 Al Qaeda announced Monday that its No. 3 official, Mustafa al-Yazid, had been killed along with members of his family - perhaps one of the most severe blows to the terror movement since the U.S. campaign against al Qaeda began. A U.S. official said al-Yazid was believed to have died in a U.S. missile strike.

A statement posted on an al Qaeda Website said al-Yazid, which it described as the organization's top commander in Afghanistan, was killed along with his wife, three daughters, a grandchild and other men, women and children but did not say how or where.

The statement did not give an exact date for al-Yazid's death, but it was dated by the Islamic calendar month of "Jemadi al-Akhar," which falls in May.

Some reports suggest he may have been killed in a May 21 drone strike in the village of Mohammed Khel in the Datta Khel area of North Waziristan.

His death would be a major blow to al Qaeda, which in December "lost both its internal and external operations chiefs," the official said on condition of anonymity because of the sensitivity of the information.

"Perhaps we may be getting close to the top two," CBS News security analyst Juan Zarate said Tuesday on "The Early Show", referring to Osama bin Laden and his deputy Ayman al-Zawahri.

Zarate said two years of suspected CIA drone strikes in the Pakistan-Afghanistan border region had led to a, "depletion of the senior bench for al Qaeda."

He believed the strikes were likely to add "stress" to the group's core leadership, but that apprehending or killing bin Laden and Zawahri remained key objectives, as bin Laden in particular "still matters, he's still strategically relevant."

The Egyptian-born al-Yazid, also known as Sheik Saeed al-Masri, was a founding member of al Qaeda and the group's prime conduit to Osama bin Laden and Ayman al-Zawahri. He was key to day-to-day control, with a hand in everything from finances to operational planning, the U.S. official said.

A Taliban source close to one of Pakistan's most powerful militant commanders tells CBS News' Sami Yousafzai al-Yazid's death would be "a big loss for al Qaeda," but claimed the American focus on taking out senior members would be overshadowed by the group's successful recruiting.

The source, who spoke to CBS on condition of anonymity, said the militant group's ranks had swelled to record levels in the last two years. He said al-Yazid had been instrumental in forging a closer bond between al Qaeda and Pakistan's Taliban leaders.

"Pakistani agencies had been watching him for a long time," the source added. His claims could not be independently verified, and the Taliban often exaggerate claims of recruitment.

Yousafzai says it was not immediately clear who bin Laden and al-Zawahri might tap to replace the slain Egyptian militant, but the Taliban source claimed the group was spoiled for choice.

Al-Yazid has been reported killed before, in 2008, but this is the first time his death has been acknowledged by the militant group on the Internet.

Two Pakistani intelligence officials, speaking on condition of anonymity because they were not authorized to talk to the media, said al-Yazid died in a U.S. missile strike on May 21 in the North Waziristan tribal area.

Soon after the attack, officials reported that two foreigners were among the 10 people killed, but did know their identities. Five women and two children were also wounded in the attack, which occurred in the village of Boya near the main town in the area, Miran Shah.

The intelligence officials said they received word of al-Yazid's death last week and confirmed it by speaking to local tribal elders and Taliban members. They said their sources had not seen al-Yazid's body and did not know where he was buried.

Al-Yazid has been one of many targets in a U.S. Predator drone campaign aimed at militants in Pakistan since President Barack Obama took office. Al-Yazid made no secret of his contempt for the United States, once calling it "the evil empire leading crusades against the Muslims."

"We have reached the point where we see no difference between the state and the American people," al-Yazid told Pakistan's Geo TV in a June 2008 interview. "The United States is a non-Muslim state bent on the destruction of Muslims."

The shadowy, 55-year-old al-Yazid has been involved with Islamic extremist movements for nearly 30 years since he joined radical student groups led by fellow Egyptian al-Zawahri, now the No. 2 figure in al Qaeda after bin Laden.

In the early 1980s, al-Yazid served three years in an Egyptian prison for purported links to the group responsible for the 1981 assassination of Egyptian President Anwar Sadat. After his release, al-Yazid turned up in Afghanistan, where, according to al Qaeda's propaganda wing Al-Sabah, he became a founding member of the terrorist group.

He later followed bin Laden to Sudan and back to Afghanistan, where he served as al Qaeda's chief financial officer, managing secret bank accounts in the Persian Gulf that were used to help finance the Sept. 11, 2001, attacks on New York and Washington. After the U.S. and its allies invaded Afghanistan in 2001, al-Yazid went into hiding for years. He surfaced in May 2007 during a 45-minute interview posted on the Web by Al-Sabah, in which he was introduced as the "official in charge" of the terrorist movement's operations in Afghanistan.

Some security analysts believe the choice of al-Yazid as the Afghan chief may have signaled a new approach for al Qaeda in the country where it once reigned supreme.

Michael Scheuer, former head of the CIA unit that tracked bin Laden, believes bin Laden and al-Zawahri wanted a trusted figure to handle Afghanistan "while they turn to other aspects of the jihad outside" the country.

Al-Yazid had little background in leading combat operations. But terrorism experts say his advantage was that he was close to Taliban leader Mullah Omar. As a fluent Pashto speaker known for impeccable manners, al-Yazid enjoyed better relations with the Afghans than many of the al Qaeda Arabs, whom the Afghans found arrogant and abrasive.

That suggested a conscious decision by al Qaeda to embed within the Taliban organization, helping the Afghan allies with expertise and training while at the same time putting an Afghan face on the war.

Al-Yazid himself alluded to such an approach in an interview this year with Al-Jazeera television's Islamabad correspondent Ahmad Zaidan. Al-Yazid said al Qaeda fighters were involved at every level with the Taliban.

"We participate with our brothers in the Islamic Emirate in all fields," al-Yazid said. "This had a big positive effect on the (Taliban) self-esteem in Afghanistan."

A September 2007 al Qaeda video sought to promote the notion of close Taliban-al Qaeda ties at a time when the Afghan insurgents were launching their comeback six years after their ouster from power in Kabul.

There is also evidence that al-Yazid has promoted ties with Islamic extremist groups in Central Asia and Pakistan, where other top al Qaeda figures are believed to be hiding.

"He definitely seems to have significant influence among the Pakistani Taliban and the Central Asian groups," terrorism expert Evan Kohlman said. "They regularly post and share his videos on the Web, just as they would with bin Laden or al-Zawahri."

In August 2008, Pakistani military officials claimed al-Yazid had been killed in fighting in the Bajaur tribal area along the Afghan border. However, he turned up in subsequent al Qaeda videos, all of which had clearly been made after the Bajaur fighting.