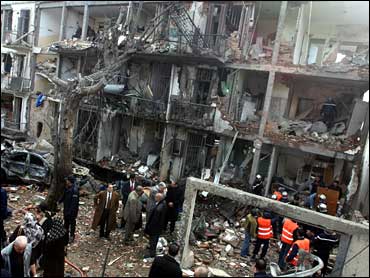 The North African branch of al Qaeda claimed in a Web site posting Tuesday responsibility for bombings in the Algerian capital, saying suicide bombers carried out the attacks that killed at least 26 people.

"This is another successful conquest ... carried out by the Knights of the Faith with their blood in defense of the wounded nation of Islam," said the statement.

The two car bombs, including one that targeted offices of the United Nations, also wounded 177, according to Interior Minister Noureddine Yazid Zerhouni.

A national official at the civil protection agency who spoke on condition of anonymity said 45 people were killed. A doctor at one Algiers hospital who said he was in contact with staff at other area hospitals put the death toll at 60 or more.

A United Nations spokeswoman said four U.N. employees died in the blast, according to preliminary tallies.

Officials earlier said 12 staff members were missing, and Marie Heuze, a spokeswoman for the world body in Geneva, said if all the missing were dead, it would be the deadliest assault on the U.N. since the Baghdad bombing of 2003 that killed 22.

"We are looking through the rubble for people," said Jean Fabre of the U.N. Development Program, after speaking with Marc Destanne De Bernis, the agency's top official in the Algerian capital. "He doesn't know the counts of death. He knows that there are about 12 people missing, of which he has no news."

"We can't even say for certain that the U.N. was being targeted but one can certainly start to draw that conclusion since this explosion took place in a very narrow street right between two U.N. buildings," Redmond told CNN.

French Foreign Minister Bernard Kouchner condemned the attacks as "barbarity" and said that while Algeria had made "great progress" in fighting terrorism, "The sordid beast is not yet dead."

U.N. Secretary-General Ban Ki-moon strongly condemned the bombings. "This is just unacceptable," said a somber Ban, who was on Indonesia's resort island of Bali for a U.N. climate conference. "I would like to condemn it in the strongest terms. It cannot be justified in any circumstances."

Zerhouni said the attacks were caused by car bombs, with the one at the U.N. offices seemingly driven by a suicide bomber.

"An attack like this is among the easiest actions to carry out. I have always said that we are not safe from these sorts of attacks," he told reporters.

The U.N. offices are in the upscale Hydra neighborhood of Algiers, which houses many foreign embassies and has a substantial foreign population. One damaged U.N. building appeared to have collapsed in on itself, spilling its insides into a street littered with the soot-covered remains of parked cars crunched by the force of the blast.

The blast at the Constitutional Council, which rules on the constitutionality of laws and oversees elections, ripped chunks off the white facade of the new building, exposing the red brick underneath, and left a hip-deep crater in the road.

Some victims of one of the attacks had been riding a school bus, the official news agency APS said.

There were no immediate claims of responsibility for Tuesday's bombings, but they come amid an increasing campaign of violence (Click for timeline) by the North African franchise of Osama bin Laden's terror group.

Algeria has been battling Islamic insurgents since the early 1990s, when the army canceled the second round of the country's first-ever multiparty elections, stepping in to prevent likely victory by an Islamic fundamentalist party.

Islamist armed groups then turned to force to overthrow the government, with up to 200,000 people killed in the ensuing violence.

The last year has seen a series of bombings against state targets, many of them suicide attacks.

Most recently, al Qaeda in the Maghreb (North Africa) claimed responsibility for two blasts in September; a car bomb that killed 28 coast guard officers in a coastal town about 30 miles from Algiers, and another blast just days after which ripped through a crowd waiting to see the president.

Tuesday's date - the 11th - could point to an Islamic terror link for the most recent attack. Al Qaeda in the Maghreb claimed responsibility for attacks on April 11 that hit the prime minister's office and a police station, killing 33 people.

(CBS)
The group has carried out a spate of recent bombings that have shattered the Algerian government's efforts - successful until recently - to restore calm after a 15-year Islamist insurgency.

Al Qaeda's media operation released a half-hour long video on Nov. 3, 2007, and obtained by CBS News, titled, "Unity of the Ranks," featuring an audio statement by the larger group's second in command, Ayman Zawahiri, and a and field commander with ties to North Africa, Abu Laith al-Libi.

In the tape, Zawahiri called for attacks on Western interests throughout North Africa, and urged the Mujahideen to overthrow the leaders of Algeria, Libya, Tunisia, and Morocco.

"We swear to God to continue (to) sacrifice our lives until you stop supporting the crusaders in their war, apply the Islamic tenet and stop your war against God's religion," the group said in a separate statement posted on an Islamic Web site in September.

Near the end of July 2007, CBS News found a communiqué posted by al Qaeda in the Islamic Maghreb boasting about the success of the franchise, saying it would have been more successful had it not been for al Qaeda's commitment to avoid civilian casualties. The communiqué warned Muslims to keep away from government buildings in coming months.

The government has responded to the increasing attacks by intensifying military crackdowns on Islamic militants hiding out in remote scrubland. Zerhouni warned terrorists in September that they have "one choice: turn themselves in, or die."

The name al Qaeda in the Maghreb was only adopted by the group in January, after the remnants of the insurgency, the Salafist Group for Call and Combat, or GSPC, formally linked with al Qaeda.

Once focused on toppling the Algerian government, the group has now turned its sights on international holy war and the fight against Western interests. French counterterrorism officials say it is drawing members from across North Africa.