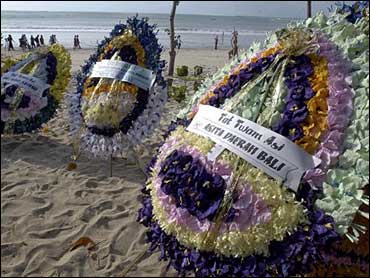 Authorities named two al Qaeda-linked Malaysian fugitives suspected of masterminding the 2002 nightclub bombings on the same Indonesian island as the likely culprits behind the latest carnage, which has raised doubts about the success of a regional crackdown on the Southeast Asian terrorist group Jemaah Islamiyah.

CBS News correspondent Elizabeth Palmer reports that although no one has claimed responsibility for the bombings yet, experts say the attacks look like the work of the extremist group Jemaah Islamiyah, which claims links to al Qaeda and which has organized a series of terrorist attacks.

Members of Jemaah Islamiyah were convicted of the attacks on tourist-packed nightclubs in Bali in 2002 that killed 202 people and for other deadly bombings in the world's most populous Muslim country.

Scores of Jemaah Islamiyah suspects have been arrested in the past three years in Indonesia, Malaysia, Singapore, the Philippines and Thailand, leading some officials to say the group's leadership has been crippled. But analysts have warned that a new generation of militants has joined the group and have been preparing for attacks.

Saturday's near-simultaneous blasts struck two seafood cafes in the Jimbaran beach resort and a three-story noodle and steakhouse in downtown Kuta. Kuta is the bustling tourist center of Bali where two nightclubs were bombed three years ago, also on a busy Saturday night, killing 202 people.

"The modus operandi of Saturday's attacks is the same as the earlier ones," said Mbai, who identified the two suspected masterminds as Azahari bin Husin and Noordin Mohamed Top.

He said the two were not believed to be among the three suicide attackers, although the assailants have not yet been identified. Their remains were found at the scenes, he said.

"I have seen them. All that is left is their head and feet," he told The Associated Press. "By the evidence we can conclude the bombers were carrying the explosives around their waists."

It was not immediately clear whether the three suicide bombers were included in the death toll of 25.

Two Australians, two Americans and a Japanese man were among those killed, along with at least 12 Indonesians. Officials were trying to identify the nationalities of the 10 other corpses in the morgue, a hospital statement said.

"We will hunt down the perpetrators and bring them to justice," he said.

Western and Indonesian intelligence agencies have warned repeatedly that Jemaah Islamiyah was plotting more attacks in the world's most populous Muslim country. Last month, Yudhoyono said he was especially worried the extremist network was about to strike.

"I received information at the time that terrorists were planning an action in Jakarta and that explosives were ready," he said Saturday.

Vice President Yusuf Kalla told the British Broadcasting Corp. it was too soon to identify those responsible.

Dozens of people, most of them Indonesian, waited in tears outside the morgue in Sanglah Hospital, near the island's capital Denpasar, for news of friends and relatives missing since the attacks.

The bombers struck at about 8 p.m. as thousands of diners flocked to restaurants in tourist areas on the bustling, mostly Hindu island, which was just starting to recover from the 2002 blasts.

Witnesses reported seeing dismembered bodies at the scene, many of them foreigners. (video)

One witness, I Wayan Kresna, told the private El Shinta radio station that he counted at least two dead near that attack, and many more were taken to the hospital.

"I helped lift up the bodies," he said. "There was blood everywhere."

At almost the same time about 18 miles away in Kuta, a bomb exploded at the three-story Raja restaurant in a bustling outdoor shopping center. Smoke poured from the badly damaged building.

The bomb apparently went off on the restaurant's second floor, and an Associated Press reporter saw at least three bodies and five wounded people there.

Before the 2002 bombings, Bali enjoyed a reputation for peace and tranquility. The nightclub blasts killed people from 22 countries, including 88 Australians and seven Americans.

Courts on Bali have convicted dozens of militants for the blasts, and three suspects were sentenced to death.

Since the 2002 attacks, Jemaah Islamiyah has been tied to deadly bombings outside the Australian Embassy last year at the J.W. Marriott hotel in 2003.

The group's alleged spiritual leader, Abu Bakar Bashir, who has been jailed for conspiracy in the 2002 attacks, through a spokesman denied any personal connection to the weekend explosions. There was no statement from the group, which wants to establish an Islamic state across Southeast Asia.

The two suspects fled Malaysia to escape a crackdown by authorities in several Southeast Asia countries the wake of the Sept. 11, 2001 terrorist attacks in the U.S. Scores of Jemaah Islamiyah suspects were detained, according to a Malaysian security official.

Azahari has wide expertise in bomb making, including remote controlled explosives, which he learned in southern Philippines and Afghanistan in 1999 and 2000, the security official said.

He "would have little problem in improvising their skills to come up with explosive vests," said the official.

Noordin is said to be Azhari's understudy and a recruiter of foot soldiers.

Authorities in Malaysia have been keeping a close eye on the relatives and friends of the two suspects, but "their trail went cold" several months ago, the official said.

Azahari, a British-trained engineer, and Noordin are accused of orchestrating two other bombings in the Indonesian capital in 2003 and 2004.

Although both the Bali incidents were suicide attacks, a crucial difference is that last time the bombs were carried in a car and a backpack. This time, the three suicide bombers were wearing vests packed with explosives, metal shrapnel and ball bearings, officials said.