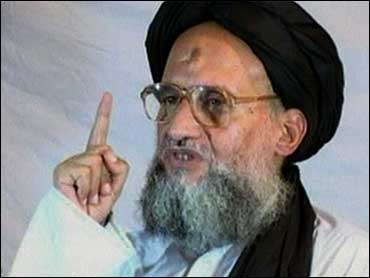 It was the first reaction by the terrorist network to the Mideast conference, sponsored by President Bush and attended by key Arab countries, including Saudi Arabia, Syria and Egypt, as well as Palestinian and Israeli leaders.

The conference relaunched Palestinian-Israeli peace talks after a seven year hiatus - a key breakthrough in the region's core conflict.

"The Annapolis meeting was held to turn Palestine into a Jewish state," the voice, purported to be that of Ayman al-Zawahiri, said in the 20-minute posting that carried a still photo of the white-turbaned militant against a backdrop of a photograph from the conference.

"The czar of Washington invited 16 Arab countries... to sit in one room, at one table with the Israelis," al-Zawahiri said, adding that the conference "witnessed the betrayal deals to sell Palestine."

The authenticity of the Friday's posting, downloaded by CBS News could not be independently confirmed, but it appeared on a Web site commonly used by al Qaeda, and carried the logo of the terror group's production unit, as-Sahab.

Al-Zawahiri mainly addressed Arabs, urging them to condemn the Annapolis conference and label Mahmoud Abbas as "the traitor," adding that the Palestinian "brother-president sold you out in Annapolis and in its aftermath."

It's time now, he said, for the Muslims to "extent hands to other jihad brothers" - a likely reference to militants beyond the Middle East.

"My brothers in Palestine, we, all Muslims, the Mujahedeen are by your side, in your confrontation with the Zionist enemy," al-Zawahiri said. "We will not let you down even if your politicians do."

Al-Zawahiri admonishes any Palestinians who might back the talks with Israel as betraying the greater cause of jihad: "You ought to remember that you are seeking to liberate every inch of Muslim land," he tells them, indicating that settling for a Palestinian state alone would be neglecting the greater cause. "You, and other Muslims, are waging a single jihad, on behalf of a single nation, against a single Zionist-Crusader enemy."

The message seemed to be an attempt to guilt-trip Palestinians into rejecting the peace-process.

It was a nuanced change of tone from al Qaeda, which has for years rallied Muslims around the cause of liberating the Palestinians - a message which al-Zawahiri did repeat in the new audio.

He also criticized an iconic Islamic militant, without naming him, who after years in an Egyptian jail has said al Qaeda is fighting its holy war in a way that contradicts the Holy Quran. "Those revisionists are in fact calling for a new American religion that violates God's rules," he said.

A top jailed Jihad leader, Sayed Imam, last month announced his "Revisions" - a recanting of his past calls for the use of force to overthrow Arab governments seen by militants as infidels.

Egypt is hoping the "Revisions" will diminish support for militancy but al Qaeda leaders have dismissed similar past recantations as forced on imprisoned militants. Imam is seen as one of the founders of the jihadist movement, and his earlier writings have been used as guiding principles for decades.

"I am addressing the Muslim nation in Egypt in particular: where is your role in confronting aggression on Islam and Muslims?" al-Zawahiri said. "Stand up and ... be aware of the poisons of weakness and submission which the traitor regime is trying to inject into you through the tongues of the revisionists."

He called on Egyptian soldiers and also Bedouin tribes in Egypt's Sinai penisnsula to rise against the rule of President Hosni Mubarak.

"God wants you to get ready, for the sake of God," al-Zawahiri said.

Al-Zawahiri - seen by many counterterrorism experts to be al Qaeda's operational chief, rather than bin Laden - is believed to play a large role in directing al Qaeda's strategy on the ground and issues frequent videos an audiotapes, often laying out the network's doctrinal line.

In most recent postings, al-Zawahri sought to galvanize fighters from North Africa to Afghanistan in a September video. In an audiotape in July, he threatened to retaliate against Britain for having honored novelist Salman Rushdie and railed against Pakistan President Pervez Musharraf.