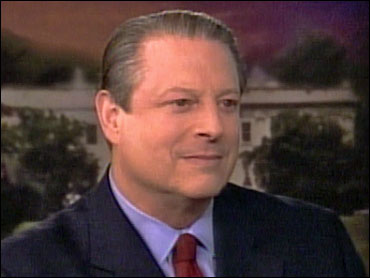 This column was written by Eric Alterman.

That Al Gore's 2000 presidential candidacy was treated unconscionably by most members of the mainstream media is not really arguable by sentient beings. The very idea that a candidate like George W. Bush — extremist, incompetent, unprepared for office, addicted to cronyism and incapable of admitting even the simplest human error — could have been held by so many reporters to be a better choice for President than the two-time Vice President, Senator, Representative and environment and nuclear weapons expert, to say nothing of his central role in the Clinton Administration's successful two-term presidency, would be laughable were its consequences less tragic. And yet in that election, the media made Al Gore out to be a liar because so many reporters chose to misreport his remarks or take them out of context. To top it off, they made a joke of their maliciousness, mocking Gore for alleged mendacities that were largely the results of their carelessness and deliberate misrepresentation.

Gore has since moved on to become not only one of America's most powerful progressive voices but also, when it comes to the dangers posed by climate change, something of a secular prophet. "An Inconvenient Truth" has turned out to be perhaps the most influential political argument by a private citizen since Rachel Carson's "Silent Spring." The book version of the movie and his newest tome, "The Assault on Reason," are runaway bestsellers. Gore is a contender for this year's Nobel Peace Prize. And time has more than borne out the harsh assessments he has offered of George W. Bush over the past seven years, for which pundits like Charles Krauthammer and Joe Klein called him, literally, crazy.

And yet within the hermetically sealed confines of the American MSM, little has changed. In his new book Gore offers a complicated and depressing indictment of our present predicament, focusing on the dishonesty of our politics and the toothlessness of our tabloid-obsessed media. Resting as it does on reasoning derived from the likes of Jürgen Habermas and other philosophers, environmental scientists and even neuroscientists, the book could not help but trigger the MSM's reflexive anti-intellectualism, to say nothing of their loathing of its author.

Witness the Washington Post, whose reporters in 2000 ran with Republican Party press releases purporting to be Gore's own words. Amazingly, the paper's recent treatment of Gore has been even more nakedly hostile, sometimes bizarrely so. First out of the gate was Governing magazine editor Alan Ehrenhalt, writing in the paper's Sunday Book World, who chose not to focus his review on the work itself but instead offered up a stream of attacks on Gore's personality. Presenting no evidence, Ehrenhalt complained of Gore's "consistent ability to express fundamentally reasonable sentiments — often important ones — in ways that annoy the maximum possible number of people." Gore's movie, he said, was "smug and self-centered" — again, no evidence. True, he added that "much that he writes seems to be on the mark." Too bad it was written by an author with "an incurable habit of calling more attention to himself than to the ideas he wishes to communicate." Evidence? Zip.

Next came Post news columnist Dana Milbank. After attending a Gore speech he observed, "Even if Gore were speaking before a sellout crowd at Verizon Center, he would still be the smartest guy in the room. He reminded his listeners of this repeatedly last night," in a manner Milbank found "all too frequently, pedantic." With considerable condescension, Milbank added, "Not that you'd doubt Gore on these points, but, just in case, there are 273 endnotes," as if offering readers access to one's sourcing — as any serious nonfiction author save Bob Woodward is expected to do — is another example of what a self-satisfied smartypants we're dealing with.

Not long afterward the Post's Outlook section published yet another assault on Gore, this one by Weekly Standard editor Andrew Ferguson. Astonishingly, Ferguson began his screed by asserting, "You can't really blame Al Gore for not using footnotes in his new book.... It's a sprawling, untidy blast of indignation, and annotating it with footnotes would be like trying to slip rubber bands around a puddle of quicksilver." I say "astonishingly" because, as the annoyed Mr. Milbank pointed out in the same newspaper, the book contains 273 source notes spread across twenty pages right there in the back. So common was the anti-Gore animus that it apparently blinded everyone involved with the piece, thereby allowing Ferguson to humiliate himself as well as the newspaper with an accusation so amateurish it dissipated with a mere glance at the book.

While I have focused on the Post, it's not as if the rest of the media distinguished themselves — or diverged from their circa-2000 scripts. At ABC News, Diane Sawyer badgered Gore about his political ambitions, Jake Tapper compared the book to a Michael Moore missive and Terry Moran portrayed it as an act of vengeance. On the New York Times op-ed page David Brooks mocked Gore as a "Vulcan Utopia[n]," and Maureen Dowd focused, laserlike, on crucial features like Gore's waistline and his author photo while terming the ex-VP a "presidential flirt," a "righteous tease" and a "high-minded scold." And in a sentence that may rival Ferguson's for the Pulitzer Prize for Irresponsible Imagination in the Service of Personal Obsession — were one ever to be established — Dowd wrote that during his Diane Sawyer interview, Gore "almost seems to want to sigh and roll his eyes." Never mind, dear reader, that Al Gore neither sighed nor rolled as much as a single eyelash. To Dowd, writing in the newspaper of record, he "almost seemed to want to," and that's good enough.

So give George W. Bush credit. He may lie about counterproductive wars, destroy our reputation abroad, ignore Katrina victims, approve torture, blow up our balance of payments, ignore scientific evidence, undermine our Constitution and turn the Justice Department over to a collection of ideological hacks... At least he doesn't make Maureen Dowd think he wants to roll his eyes.
By Eric Alterman
Reprinted with permission from the The Nation