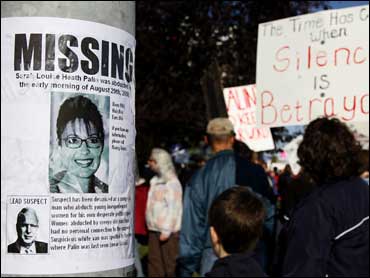 The Alaska Supreme Court has agreed to decide whether the findings of an investigation into abuse-of-power charges against Gov. Sarah Palin can be blocked.

The probe is investigating allegations that Palin, her husband and staff members exerted pressure to have her ex-brother-in-law, an Alaska State trooper, fired, and that another official who refused was himself fired by Palin.

The report on "Troopergate" is scheduled to be released next Friday, less than a month before Election Day.

A group of six GOP legislators who fear the report may be potentially damaging to Palin's vice presidential candidacy is asking the Supreme Court to decide on halting the report, the day after a Superior Court judge allowed the investigation to proceed.

The lawmakers claim the probe (which was originally authorized as a bipartisan investigation by the Republican-controlled state legislature) is being manipulated for political purposes to hurt Palin before Election Day.

The Texas-based Liberty Legal Institute and local attorney Kevin Clarkson, who are representing the GOP legislators, filed the emergency appeal which read, in part, "The plaintiffs and Alaskans will suffer irreparable harm if the investigation at issue continues and if the resulting investigative report issues as planned on Oct. 10, 2008."

The court scheduled oral arguments for 3 p.m. Wednesday on whether to suppress the probe's findings, with a promise to issue a decision by the end of Thursday.

The independent investigator conducting the probe plans to turn over his conclusions by next Friday to the Legislative Council, the body that authorized it.

The probe is looking into whether Palin, who is Republican Sen. John McCain's running mate, and others pressured Public Safety Commissioner Walt Monegan to fire a state trooper who was involved in a contentious divorce from Palin's sister and then fired Monegan when he wouldn't dismiss the trooper.

In dismissing the lawsuit, Superior Court Judge Peter Michalski said the Legislature has the ability to investigate the circumstances surrounding the firing of a public officer the lawmakers had confirmed.

Liberty Legal Institute attorney Kelly Shackelford said Friday that Michalski wants the court to rule that the legislative investigation is unconstitutional. He said that alleged bias by the probe's overseers violates a provision of the state constitution that says legislative and executive investigations cannot infringe on a person's right to "fair and just treatment."

Liberty Legal Institute is the litigation arm of the Free Market Foundation, a Plano, Tex.-based nonprofit that works to organize and promote a conservative Christian agenda. It is allied with Dr. James Dobson's Focus on the Family.

Defense attorney Peter Maassen said the Legislature is free to conduct an investigation as it sees fit and the judge's ruling confirmed the separation of power principles. By the time the Supreme Court makes a ruling, the investigation will have already been completed - all that will remain will be to make its findings public.

"There's been no time in history that a court has suppressed the outcome of a legislative investigation," Maassen said.

Michalski also threw out a lawsuit filed by Palin aides seeking to dismiss subpoenas compelling their testimony in the investigation. The aides had argued that the subpoenas should not be honored because they shouldn't have been issued.

It was not clear if those aides would join the appeal. Governor's spokesman Bill McAllister said Attorney General Talis Colberg has not yet spoken with the aides since the ruling was made.

Palin had pledged her cooperation with the probe, until she became the vice presidential candidate. She has said through her lawyer that she only will cooperate with a separate investigation, one that she calls unbiased but is conducted in secret, by board members appointed by the governor's office, and which can last for years.

French said Sept. 2 that the results of the investigation could constitute an "October surprise" for the McCain campaign. He later apologized for the remark, but Palin's lawyer has said the biased impression it created can't be undone.

Of the Supreme Court's five justices, one (Daniel E. Winfree) was appointed by Gov. Palin.