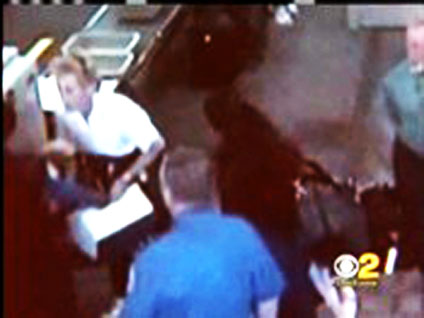 GLENDALE, Calif. (CBS/AP) - A woman accused of hitting an airport security agent in a dispute over a cooler filled with applesauce has been cleared by a judge -- provided it doesn't happen again.

A year ago, 58-year-old Nadine Hays was going through security at Bob Hope Airport in Burbank, Calif., with her mother, who was 93 years old.  Headed to a wedding, Hays wouldn't surrender her blue cooler filled with snacks for her elderly mother, and ended up in jail, reports CBS station KCBS-TV in Los Angeles.

"I had things like applesauce, cottage cheese... I apparently reached over and grabbed the ice chest with my second hand and that's where the prosecution is saying I supposedly hit the supervisor," Hays told KCBS.

Hays was outraged because she had emailed the TSA ahead of time to inform them about the extra baggage she would be carrying because of her elderly mother's medical needs.

"I said,'I want anyone here to witness the fact that if anything happens to my mom... because TSA is not allowing me to take this food onboard for her, I'm going to hold them 100 percent responsible,'" Hays told KCBS.

Eventually she threw out the food, but ended up being charged with misdemeanor battery after her scuffle with the TSA agent.  A Glendale Superior Court Judge said Tuesday that the charge will be dismissed, if  Nadine Hays stays out of trouble for six months.

Eventually, Hays and her mother got to the wedding.  While the trip was "memorable," it was in fact, her mother's last.

"She had a good time and that made it worth it," Hays told KCBS.