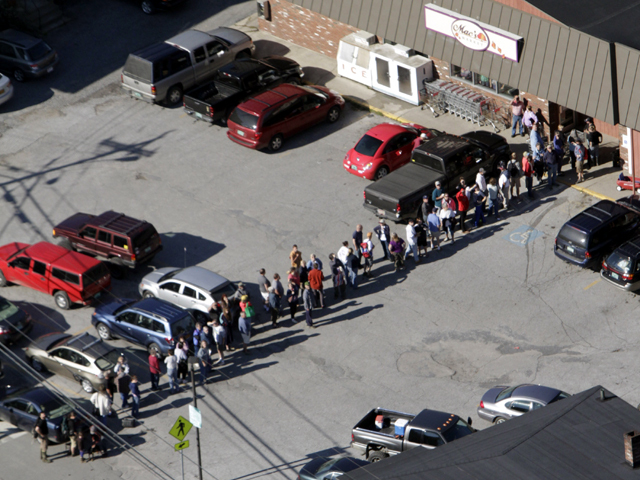 Vermont Emergency Management spokesman Mark Bosma said the helicopters would bring relief to people in about a dozen towns where roads and bridges were washed out, including Cavendish, Hancock, Pittsfield, Stockbridge, Strafford and Stratton.

In a deluge that caught many communities off guard, Irene dumped up to 11 inches of rain in some places in Vermont, turning placid mountain streams into roaring brown torrents that smashed buildings and ripped homes from their foundations. At least three people died in Vermont.

In Windham County, Sheriff Keith Clark said so many roads were destroyed, he can't count the number of people who might be missing in the hills and who can't call for assistance because phone and power lines are down, CBS News correspondent Wyatt Andrews reports.

"Everyone was worried about the wind, no one told us about the flooding," resident Norma Shakun told CBS News. "No one warned us about flooding until five minutes before we evacuated."

Small towns in upstate New York — especially in the Catskills and the Adirondacks — were also besieged by floodwaters.

All together, the storm has been blamed for at least 42 deaths in 12 states. More than 2.5 million people from North Carolina to Maine were still without electricity Tuesday, three days after the hurricane churned up the Eastern Seaboard.

While all eyes were on the coast as Irene churned northward, some of the worst destruction took place well inland, away from the storm's most punishing winds. In landlocked Vermont, Gov. Peter Shumlin called it the worst flooding in a century.

Approximately 260 roads in Vermont were closed because of storm damage, along with about 30 highway bridges.

When Irene unleashed its wrath on Newfane, Vt., Martin and Sue Saylor were among the lucky ones. All they lost was the road to their hillside home, and their utilities.

Rivers of rainwater coursed down their hill. Just below their home deep in the woods, the Rock River rose up out of its banks, too, claiming another road.

"Stranded, nowhere to go," said Martin Saylor, 57, standing by the Rock River on Monday, waiting for his brother to bring in supplies. "Don't want to leave my house because I don't know who's going to break in or whatever. I just don't know what to do."

Vermont emergency officials and the National Weather Service warned before the storm about the potential for heavy rain and flooding. On Thursday, the governor urged people to prepare for heavy rain, high winds and possible lengthy power outages. He recommended stocking up on food, water and other supplies.

On Monday, Shumlin defended his state's decision not to undertake more extensive evacuations before the storm arrived.

"What are you going to do, evacuate the entire state of Vermont?" Shumlin asked. He added: "You can see one community that looks like it didn't get hit at all, and two miles down the road a community that is totally devastated. And obviously there's no one that can predict which community, where, why or how."

In North Carolina, where Irene blew ashore along the Outer Banks on Saturday before heading for New York and New England, 1,000 people were still in emergency shelters, awaiting word on their homes.

Airlines said it would be days before the thousands of passengers stranded by Irene find their way home. Amtrak service was still out Tuesday between Philadelphia and New York, one of the most heavily traveled parts of the nation's passenger rail system.

Commuter train service between New Jersey and New York City resumed Tuesday, except for one line that was still dealing with flooding.

Throughout the region, hundreds of roads were impassable because of flooding or fallen trees, and some bridges had simply given way, including a 156-year-old hand-hewn, wooden covered bridge across Schoharie Creek in Blenheim, N.Y. At least three towns in New York remained cut off by flooded roads and bridges.

Early estimates put Irene's damage at $7 billion to $10 billion, much smaller than the impact of monster storms such as Hurricane Katrina, which did more than $100 billion in damage. Irene's effects are small compared with the overall U.S. economy, which produces about $14 trillion worth of goods and services every year.

In Newfane (pop. 1,710), the storm's effects were staggering: About 150 people were unable to drive cars to their homes, 30 of them effectively stranded in theirs. Seven bridges were washed out. Two homes were knocked from their foundations by surging floodwaters. And one 19th-century grist mill smashed into kindling wood.

"I need a shower," said Sue Saylor. "I need water. I need electricity. It's rough."