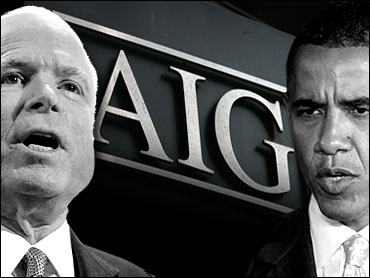 Republican presidential candidate John McCain, a day after flatly rejecting the idea of a taxpayer bailout for American International Group Inc., said Wednesday that the government had been "forced" into proposing an $85 billion loan to the nation's largest insurer.

McCain appeared to soften his opposition to the bailout proposed by the Federal Reserve, treating the plan as a necessary evil to protect ordinary Americans with financial ties to AIG - and asserting that such a financial collapse should not be allowed to happen again. He also called for an investigation to uncover any wrongdoing.

"The focus of any such action should be to protect the millions of Americans who hold insurance policies, retirement plans and other accounts with AIG," he added. "We must not bail out the management and speculators who created this mess."

Democratic rival Barack Obama blamed the Republican anti-regulatory fervor of recent years for part of the mess, saying the crisis is "a stark reminder of the failures of crony capitalism and an economic philosophy that sees any regulation at all as unwise and unnecessary."

"Despite his eleventh hour conversion to the language of reform, Senator McCain has subscribed to this philosophy for twenty-six years in Washington and the events of this week have rendered it a colossal failure," Obama said in a statement.

"The fact that we have reached a point where the Federal Reserve felt it had to take this unprecedented step with the American Insurance Group is the final verdict on the failed economic philosophy of the last eight years," Obama added. "While we do not know all the details of this arrangement, the Fed must ensure that the plan protects the families that count on insurance. It should bolster our economy's ability to create good-paying jobs and help working Americans pay their bills and save their money. It must not bail out the shareholders or management of AIG."

Neither candidate said how regulation should be improved.

"The shot that has been called by the feds - it's understandable but very, very disappointing that taxpayers are called upon for another one," Palin said during a visit to a deli.

McCain noted that Obama now talks about possibly delaying his planned tax increases on wealthy Americans if he wins the election and the economy is still in recession when he takes office. McCain said that, in essence, was an acknowledgment that Obama's tax plan as written "will hurt our economy, not help it."

The Arizona senator visited a GM plant that employs 3,900 and vowed: "We're not going to leave the workers here in Michigan hung out to dry while we give billions in taxpayers dollars to Wall Street."

Indeed, both McCain and Obama support sending billions to the auto industry in what critics call yet another bailout by taxpayers. McCain, who lost Michigan primary after saying some U.S. jobs will never come back from overseas, now is behind a plan in Congress to give automakers $25 billion in federal loans to help them retool for cleaner cars.

"It's time to get our auto industry back on its feet," McCain said. "And it's time for a new generation of cars and for loans to build the facilities to make them."

Although McCain has stepped up criticism of government regulators as he seeks the presidency, he has long favored a reduction in corporate regulation.

McCain had a hand in economic matters as a member of the Senate Commerce Committee, which he once chaired. His campaign has noted that McCain was heavily involved in telecommunications regulation and deregulation.

McCain said in an interview that he didn't want the government to bail out AIG. "But there are literally millions of people whose retirement, whose investment, whose insurance were at risk here," he said on ABC's "Good Morning America." "They were going to have their lives destroyed because of the greed and excess and corruption."

Elaborating on the charge of corruption, McCain said that many Wall Street executives had claimed "everything's fine, not to worry" and that Congress and regulators had paid no attention. "All of them were asleep at the switch," he said, and went on to blame special interests and lobbyists as well.

In two new television ads Wednesday, McCain asserts that he is the right leader to keep Americans' savings safe.

"I'll meet this financial crisis head on," he says in one ad. "Reform Wall Street. New rules for fairness and honesty. I won't tolerate a system that puts you and your family at risk. Your savings, your jobs - I'll keep them safe."