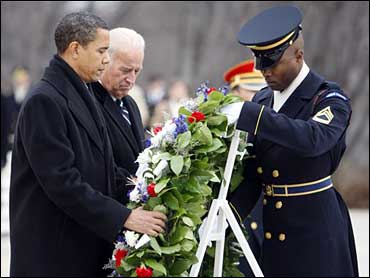 On his first full day as president, Barack Obama will meet with high-ranking military officers to discuss the Iraq war, a conflict he has vowed to end after six years of fighting, a top adviser to Mr. Obama said Saturday.

Wednesday's meeting of the Joint Chiefs of Staff and other military commanders and aides will fulfill a key campaign promise and bring the war back to the political forefront after months of being overshadowed by the economy.

Especially in the early stages of his two-year campaign, Mr. Obama vowed to wind down the war in Iraq, a stance that helped him eclipse Hillary Rodham Clinton in the Democratic primaries.

In the past year or so, however, Iraq lost prominence in the national debate, and Mr. Obama gave himself some wiggle room on his goal of withdrawing U.S. troops within 16 months. He also stressed the need to pump more U.S. military power into Afghanistan, where Taliban fighters control substantial parts of the country.

Speaking of Iraq in July, the president-elect said: "I intend to end this war. My first day in office, I will bring the Joint Chiefs of Staff in, and I will give them a new mission, and that is to end this war responsibly and deliberately but decisively."

The Obama adviser, who would speak Saturday only on condition of anonymity because the Wednesday meeting has not been formally announced, said the session will include several top commanders and aides in addition to the Joint Chiefs of Staff.

The military meeting will be one of many events on President-elect Obama's jam-packed first full day as president. Although he may not get to bed before 3 a.m. EST after attending 10 inaugural balls, Mr. Obama also has scheduled a church service, economic and diplomatic meetings and a White House reception for hundreds of visitors.

President-elect Obama has deliberately raised Wednesday's symbolic importance, citing various things he would do on "Day One" of his administration. Scores of special interest groups have jumped in, imploring him to enact this or that policy right away.

The new president will start Wednesday at Washington's National Cathedral for the National Prayer Service, which dates to George Washington's time. His office says he and his wife, Michelle, will welcome "hundreds of special guests" on "day one, when we open the doors of the White House to you." (Ticket-seekers were directed to the Web site http://www.pic2009.org/dayone).

And Mr. Obama told USA Today that he will assemble a team "on Day One" to deal with violence in Gaza and other Middle East problems.

The president-elect earlier signaled plans to issue an executive order during his first week in office to close the military prison at Guantanamo Bay, in Cuba. It's unlikely, however, that the facility will actually close anytime soon as the new president weighs what to do with the estimated 250 al Qaeda, Taliban or other foreign fighter suspects still there.

It's possible that Mr. Obama will make a few official acts Tuesday afternoon, in the time between his swearing-in and inaugural parade, and his stops at the 10 inaugural balls with his wife, Michelle.

The new president "will hit the ground running as soon as he is sworn in," his press secretary, Robert Gibbs, said in an interview Saturday. "Much of his senior staff will head directly to the White House after he is sworn in."

On Wednesday, Gibbs said, Mr. Obama will meet with his economic team and national security advisers "to talk about the economic crisis and our challenges abroad including wars in Iraq and Afghanistan."
By Jennifer Loven and Charles Babington