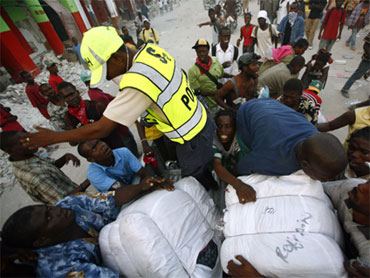 Prayers of thanksgiving and cries for help rose from Haiti's huddled homeless Sunday, the sixth day of an epic humanitarian crisis that was straining the world's ability to respond and igniting flare-ups of violence amid the rubble of Port-au-Prince.

Haitian police struggled to scatter hundreds of stone-throwing looters in the city's Vieux Marche, or Old Market. Elsewhere downtown, amid the smoke from bonfires burning uncollected bodies, gunfire rang out and bands of machete-wielding young men roamed the streets, faces hidden by bandanas.

CBS News correspondent Harry Smith reports that he saw one arrest Monday, but that mostly looters were left alone to harvest free stuff and squabble over it amongst themselves.

A leading aid group complained of skewed priorities and a supply bottleneck at the U.S.-controlled airport. The general in charge said the U.S. military was "working aggressively" to speed up deliveries.

Beside the ruins of the Port-Au-Prince cathedral, where the sun streamed through the shattered stained glass, the priest told his flock at their first Sunday Mass since Tuesday's earthquake, "We are in the hands of God now."

But anger mounted hourly that other helping hands were slow in getting food and water to millions in need.

"The government is a joke. The U.N. is a joke," Jacqueline Thermiti, 71, said as she lay in the dust with dozens of dying elderly outside their destroyed nursing home. "We're a kilometer (half a mile) from the airport and we're going to die of hunger." Hours later, a frail resident of the home perished in the afternoon heat. Elderly Haitians Waiting to Die

Water was delivered to more people around the capital, where an estimated 300,000 displaced were living outdoors. But food and medicine were still scarce.

The crippled city choked on the stench of death and shook with yet another aftershock Sunday. On the streets, people were still dying, people were on their knees praying for help, pregnant women were giving birth on the pavement, and the injured were showing up in wheelbarrows and on people's backs at hurriedly erected field hospitals. Authorities warned that looting and violence could spread.

At the Vieux Marche, police tried to disperse looters by driving trucks through the crowds, as hundreds scrambled over partly destroyed shops grabbing anything they could. As he ran from the scene with a big box of tampons, Love Zedouni shouted: "I've got no idea what this is, but I'm sure you can sell it."

Police used tear gas to scatter looters at street markets near the collapsed presidential palace. At the Cite Soleil slum, moments after police drove by, a reporter spotted a gunman stealing a bag of rice from a motorcycle rider.

Everybody is carrying some piece of stolen merchandise there is a sense of great unease here to say the least it almost feels like a tinder box that is getting ready to blow, Smith reports.

To protect his property, one enterprising store owner hired three armored vehicles and guards armed with shotguns to oversee the transfer his goods - not gold, cash, or flat-screen TVs but bolts of fabric, Smith reports.

"This is one of the most serious crises in decades," U.N. Secretary-General Ban Ki-moon said as he flew into the Haitian capital. "The damage, destruction and loss of life are just overwhelming."

Ban promised more help from the U.N. was on the way, and he urged Haitians to be patient and avoid a downward spiral into widespread violence.

A reliable death toll may be weeks away, but the Pan American Health Organization estimates 50,000 to 100,000 died in the 7.0-magnitude tremor, and Haitian officials believe the number is higher.

Celebrating Mass outside the once-proud pink-and-white cathedral, now a shell of rubble where a rotting body lay in the entrance, the Rev. Eric Toussaint preached of thanksgiving to a small congregation of old women and other haggard survivors assembled under the open sky.

"Why give thanks to God? Because we are here," Toussaint said. "What happened is the will of God. We are in the hands of God now."

Mondesir Raymone, a 27-year-old single mother of two, was grateful. "We have survived by the grace of God," she said.

But others were angry.

"It's a catastrophe and it is God who has put this upon us," said Jean-Andre Noel, 39, a computer technician. "Those who live in Haiti need everything. We need food, we need drink, we need medicine. We need help."

Were his parishioners being helped? Toussaint was asked. "Not yet," he replied.

The U.N. World Food Program was "pretty well on target to reach more than 60,000 people today," up from 40,000 the previous day, WFP spokesman David Orr said. But U.N. officials said they must raise that to 2 million within a month. The U.S. aid chief, Rajiv Shah, told "Fox News Sunday" he believed the U.S. distributed 130,000 "meals ready to eat" on Saturday, but the need was much larger. "We're really trying to address it," he said.

Some food was still commercially available in the city, but prices had skyrocketed beyond what most people could afford.

In a further sign of the delays, the aid group CARE had yet to set a plan for distributing 38 tons of WFP high-energy biscuits in outlying areas of Haiti, CARE spokesman Brian Feagans said Sunday. He did not say why.

The Geneva-based aid group Doctors Without Borders put it bluntly: "There is little sign of significant aid distribution."

The "major difficulty," it said, was the bottleneck at the airport, under U.S. military control. It said a flight carrying its own inflatable hospital was denied landing clearance and was being trucked overland from Santo Domingo, almost 200 miles away in the Dominican Republic, delaying its arrival by 24 hours.

French, Brazilian and other officials had earlier complained about the U.S.-run airport's refusal to allow their supply planes to land. A World Food Program official told The New York Times that the Americans' priorities were out of sync, allowing too many U.S. military flights and too few aid deliveries.

"You won't have the stray cats and dogs allowed to come into the airspace and clog it up," he said.

On Sunday, WFP spokesman Gregory Barrow in Rome was more positive, speaking of "extremely close co-operation" with the U.S. at the airport. But a coordinator here for Spain's international development agency, Daniel Martin, complained that their aid supplies had been diverted to Santo Domingo, and Doctors Without Borders spokesman Jason Cone said the U.S. military needed "to be clear on its prioritization of medical supplies and equipment."

The on-the-ground U.S. commander in Haiti, Lt. Gen. Keen, acknowledged the bottleneck problem. "We're working aggressively to open up other ways to get in here. The ports are part of that," he said on NBC's "Meet the Press."

The White House said Sunday the U.S. Coast Guard ship Oak had arrived at Port-au-Prince harbor, rendered useless for incoming aid because of quake damage, and would use heavy cranes and other equipment to make the port functional.

Other U.S. help was on the way: Some 2,000 Marines should arrive off Haiti on Monday, Keen said, reinforcing 1,000 U.S. troops on the ground.

The general reported "increasing incidents of violence," as a weakened Haitian police force and U.N. peacekeeping contingent were overwhelmed.

In the Port-au-Prince neighborhood of Delmas, a crowd gathered Sunday around the bodies of two accused looters, who had been beaten to death by angry residents. Onlookers said they were among 4,000 prisoners who escaped when the main prison collapsed in the quake.

Angry survivors loitered amid piles of burning garbage in the Bel-Air slum. "White guys, get the hell out!" they shouted in apparent frustration at the sight of more and more foreigners in their streets who were not delivering help.

They also sounded furious with President Rene Preval, who hasn't been seen at a rescue site or gone on radio to address the nation since the quake struck.

"Preval out! Aristide come back!" some shouted, appealing for a return of the populist Jean-Bertrand Aristide, who was ousted in 2004. From his South African exile, Aristide said last week he wants to return to Haiti, but spoke of no concrete plans to do so.

Thousands, at a saturation point for dealing with the city's deprivation and destruction are fleeing to the countryside, many paying $10 fares to cling to trucks and buses, Smith reports.

Work went on, meanwhile, perhaps in its desperate final hours, to find survivors buried in the vast rubble of Port-au-Prince.

A spokesman at the Israeli embassy in Washington, relaying a text message from rescuers, said Jessica Hartelin was pulled free by locals nearly six days after the earthquake and rushed to a clinic in the national stadium where she was treated by IsraAID/FIRST medical team. She was set to be transferred to an Israeli Defense Force field hospital for further treatment.

At the U.N. headquarters destroyed in the quake, rescuers lifted a Danish staff member alive from the ruins, just 15 minutes after Secretary-General Ban visited the site, where U.N. mission chief Hedi Annabi and at least 39 other staff members were killed. The rescued man was talking and smiling as he was whisked away for medical treatment. Hundreds of peacekeepers and other U.N. staff remain missing.

At a collapsed Caribbean Supermarket where search teams from Florida and New York City worked, rescuers late Sunday pulled two survivors from what had been its fourth floor. Officials said both were in stable condition, able to survive for so long by eating food trapped along with them. Earlier in the day, a policeman reported three other people had been rescued from the rubble.

U.S. teams with search dogs in the lead also found and rescued a 16-year-old Dominican girl trapped for five days in a small, three-story hotel that crumbled in downtown Port-au-Prince.

More than 1,700 rescue workers had saved more than 70 lives since the quake, a U.N. spokeswoman said in Geneva.

In such conditions, she said, people might survive until Monday.