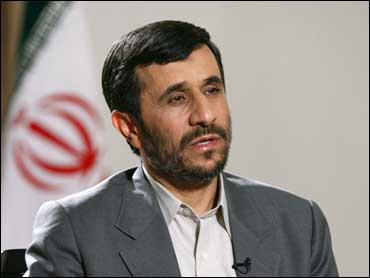 Iran's president Mahmoud Ahmadinejadand Pakistani leaders are expected to discuss security issues in their surrounding region, including worsening conditions in Afghanistan, when Ahmedinejad arrives in Islamabad on Monday for his first visit to the south Asian country.

Ahmadinejad's visit - a day after Afghan president Hamid Karzai narrowly escaped an assassination attempt - is a powerful reminder of the instability in the war-torn central Asian country with possible consequences for its surrounding region, a senior western diplomat warned.

"If Afghanistan goes out of control, Pakistan and Iran will feel the consequences. There is a very real danger of the war in Afghanistan spilling over mainly into Pakistan, but the consequences will also affect Iran," said the diplomat stationed in Islamabad in a CBS News interview given on the condition of anonymity.

The diplomat said worsening insecurity inside Afghanistan may intensify the conflict in that country between the West (including U.S. troops) and members of the Taliban, with the danger of that conflict eventually bringing intense fighting close to the Pakistani border (as well as Iran's border) at a future stage.

Pakistan has been surrounded with persistent reports in the past two years for its linked to the Taliban movement which is believed to have carried out Sunday's attack on Karzai.

The Pakistani government has always denied connections to the Taliban, though Western diplomats insist that there is evidence of connections between the Islamic militants and their supporters in Pakistan, such as members of local tribes living near the Pak-Afghan border.

For predominantly Shia Muslim majority Iran, a big concern is tied to militant violence in the country carried out by members of hardline Sunni militant groups who, according to Iranian officials, have operated from Pakistan's southwestern Baluchistan province.

"Iran's security concerns are directly connected to these people (militants) coming from the Baluchistan area," a senior Iranian official told CBS News in an interview in February this year on the condition that he would not be named.

After taking off on Monday morning from Tehran, Ahmadinejad will first travel to Islamabad for a stopover before leaving for Colombo, the capital of Sri Lanka, on the same afternoon. On his return from Sri Lanka, Ahmadinejad would stop over in Delhi, the Indian capital, for discussions with Indian leaders.

On Sunday, a senior Iranian official speaking to journalists in Tehran said Ahmedinejad's visits to India and Pakistan could help push a longstanding plan for a new pipeline to transport gas reserves from southern Iran to the two south Asian countries which both face energy shortages. In recent weeks, Pakistani officials have said, the pipeline could be extended to China as well at a future date.

"It looks like arriving at this agreement [for the pipeline] will not be out of reach [during Ahmadinejad's trip]," said Mohammad Ali Hosseini, the Iranian foreign ministry spokesman speaking at a news conference in Tehran. "And it is natural that the matter (of the pipeline) which is one of the most important issues of interest by the three parties (Iran, Pakistan and India) will be discussed in the trip by the president," he added.

In the past, the U.S. has opposed the pipeline project estimated to be worth $7.5 billion on the grounds that it would inject fresh revenues to the Iranian economy which has been under U.S. sanctions - this at a time when Washington is seeking to further pressure Iran due to Iran's alleged involvement with backing anti-U.S. groups in Iraq, and also due to Iran's development of its nuclear program.

Iranian gas reserves are thought to be the second largest in the world (after Russia's) and could bring billions of dollars in fresh revenue to Tehran if the pipeline project gets completed. In the past, Iran has failed to develop its gas reserves under the weight of U.S. sanctions which have prevented the flow of new technology and foreign capital to the Islamic country.
By Farhan Bokhari