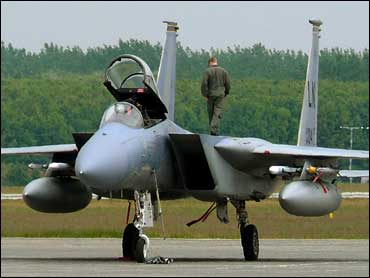 An Air Force investigation of the crash last fall of an F-15C Eagle fighter jet concluded that a defective metal beam in the frame cracked, causing it to disintegrate during flight.

In a report released Thursday, Air Force investigators said they had found the sole reason for the accident was the faulty support beam, called a longeron, which failed to meet the manufacturer's specifications.

motion recreation
shows the catastrophic failure. And an audio tape includes the voice of another pilot, who could scarcely believe his eyes, CBS News national security correspondent David Martin reports.

The man who somehow survived that crash, Maj. Steve Stilwell, said: "I knew something very violent was happening to the airplane and it was something - I had to get out. That was a no-doubter. You gotta get out of it.

The investigation conclude that a key structural part was manufactured incorrectly, and 27 hears of wear and tear finally broke in two.

The same bad part was discovered in 160 other F-15s, Martin reports.

The investigation was led by Air Force Col. William Wignall.

"The accident investigation board president (Wignall) found, by clear and convincing evidence, the cause of this accident was a failure of the upper right longeron, a critical support structure in the F-15C aircraft," the report says.

About 20 minutes after takeoff from an airfield near St. Louis on Nov. 2, the forward fuselage of Maj. Stephen Stilwell's $42 million F-15C Eagle shook violently and then broke apart 18,000 feet above the ground. Stilwell, his left shoulder dislocated and his left arm shattered, barely had time to safely eject as pieces of his aircraft tumbled from the sky over the Missouri countryside.

More troubling, however, are the results of a parallel examination finding as many as 163 of the workhorse aircraft also have flawed support beams, or longerons. The aircraft remain grounded as the Air Force continues to search for how serious the problem is and whether extensive, costly repairs are needed. Another 19 of the aircraft have yet to be inspected and also remain grounded.

Nearly 260 of the A through D model F-15s, first fielded in the mid-1970s, were returned to flight status Tuesday following fleet-wide inspections.

The twin-engine aircraft are used primarily for homeland security and are a key link in the nation's air defense network.

The Air Force's fleet of 224 newer F-15E Strike Eagles, which are used in Iraq and Afghanistan, do not have the structural problem. Those jets, whose role is more oriented toward ground attack missions, were temporarily grounded after Stilwell's crash, but returned to service shortly thereafter.

The older F-15s are stationed at many so-called "alert" sites around the country, where planes and pilots stand ready to take off at a moment's notice to intercept hijacked airliners and guard protected airspace.

Among the Air Force's other workhorse fighter jets is the F-16, which performs multiple roles, including air-to-air combat and air-to-ground attack. It entered the operational fleet in 1979.

With the F-15s temporarily grounded, F-16s and other aircraft are pulled away from their regular duties to fill the gaps. That makes it difficult for the Air Force to accomplish its mission and leaves Air Force pilots unable to train properly.

"This is systemic," Corley said.

The longeron helps support the cockpit and strengthen the jet as it moves through high-stress maneuvers while traveling hundreds of miles per hour.

Analysis of recovered parts from Stilwell's jet identified a crack in the beam near the fuselage that investigators say grew over time and was not detected during regular maintenance of the aircraft.

In the report, Wignall said that prior to Stilwell's flight, "no inspection requirements existed for detecting a crack in the longeron."

The F-15A through D models were built by McDonnell Douglas. That company merged with defense manufacturing giant Boeing in August 1997.

Company spokeswoman Patricia Frost said Boeing representatives have not seen Wignall's final report and could not comment on it.

"However, we are working with the U.S. Air Force to analyze the data gathered from fleet-wide inspections," Frost said "Once all of the data have been analyzed, a need for further inspection or repair can be determined."

No decision has been reached as to whether Boeing might be liable for the repairs, which could cost as much as $500,000 per aircraft.

"This is the starting point for looking into that question," said Lt. Gen. Donald Hoffman, a senior Air Force acquisition official. "I'm not going to speculate."

The F-22 Raptor, a stealth aircraft intended to replace the F-15, is being fielded but in smaller numbers than initially planned. The Pentagon has said it will buy just 183 Raptors due to their high cost, but members of Congress are pressing Defense Secretary Robert Gates to buy more. A single Raptor costs about $160 million, according to the Air Force.

Corley did not endorse more F-22s as the solution to the F-15 problems. But he indicated buying more F-15s would not be the Air Force's preference.

Loren Thompson, a defense analyst with the Lexington Institute in Arlington, Va., said it may make more sense to retire the older F-15s rather than fix them. Due to their age, another part could fail even after the longerons are repaired.

"This is an aircraft that was designed during the Nixon administration," Thompson said. "It doesn't seem sensible to be making fixes so late in the game."