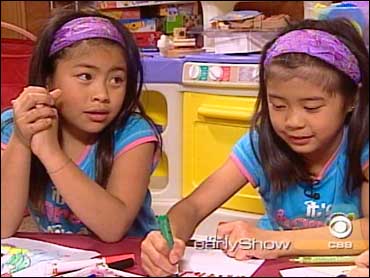 During the past 14 years, 45,000 Chinese children have been adopted by American families. Many of these families look for communities to share their experiences and, indeed, find they have much in common.

But for two families, the shared experience was actually much more. Their daughters apparently were twins, separated as babies.

The Early Show co-anchor Hannah Storm explored their amazing story. In Florida, she met Renee Surrey, a happy 8-year-old who loves gymnastics, dancing and horseback riding. You would never know she was once a sad and scared orphan in China.
"She was crying so hard she was, turned all red," remembers Renee's mother, Eileen Surrey. "She was very scared. She'd never seen anyone who looked like us."

Eileen and her husband David brought Renee home to shower her with love, but they could tell her heart still ached.

"Her sense of loss was just so big and she was just so afraid to be alone," said Eileen. "At first I thought it was because in the orphanage she wasn't alone. But it seemed bigger than that."

Meanwhile, just outside Philadelphia, Annie Bernstein, almost 8, loves her new home a world away from the orphanage in China.

"She was very alert and bright," said her mother, Andrea Ettingoff. "She was looking around and she was very aware of what was going on."

But she also seemed very deprived. Her parents noticed she ate as if she'd never eat again.

"She wouldn't want to leave the table," said Ettingoff. "All the other kids seem to eat and be satisfied. But all this food was around her and she wasn't stopping."

Ettingoff sought help from a support group on the Internet and one of the many who responded was a mom named Eileen.

"Her answer was the best answer, which was to try a sharing plate in the middle of the table and we both eat from the same plate," remembered Ettingoff. "It was incredible. It was just solved immediately."

These two moms, who lived a thousand miles apart, noticed their daughters were from the same orphanage, and decided to exchange pictures. When they saw the resemblance, they were shocked.

"I thought I was looking at a picture of my daughter," said Eileen Surrey. "I sent back an e-mail saying, 'I don't know if my baby knows your baby. But I feel like I know your baby.' "

The girls had the same hairline, same nose, same chin and same mouth. After exchanging more pictures, they just had to bring their 2-year-olds face to face. When they did, the Surreys say they immediately thought the girls were twins.

Annie's parents weren't quite so sure, though they did notice the girls seemed to have a special connection.

"We have pictures where Renee has her hand on Annie's stroller and Annie would never let even us, like, touch the rim of her stroller. But she seemed like there was some kind of comfort there," said Ettingoff.

Despite that bond, it would be four more years before Renee and Annie saw each other again. In July 2004, the families came together at a reunion for children adopted from the same orphanage. The girls were inseparable, like instant best friends and the families have continued to meet periodically. And four months ago, the families took the enormous step of testing their daughters' DNA.

"They were really beginning to consider themselves to be sisters," Ettingoff told Storm. "I didn't want them to have false hopes that this was, you know, a relationship that had a biological root and it didn't."

The DNA results showed that the girls are almost certainly sisters, which means, because they're the same age, Renee and Annie, in all probability, are fraternal twins.

The news was well-received, to say the least. Renee "just started jumping up and down and squealing, 'Yes, we're sisters! We're sisters! Yay! We're sisters!' " remembered Eileen Surrey, who finally understood why her daughter never liked to be alone.

"She was never alone, not even in the womb. So, for her, she needed Annie," she said. "My daughter has not asked me a single question about her birth family or searching for them since she's got Annie in her life … She said, 'You know, Mommy, the hole in my heart I told you about? It's smaller now.' "

Resources for families with children from China can be found at www.fwcc.org.

Why 'Everybody Hates Chris.' Not!