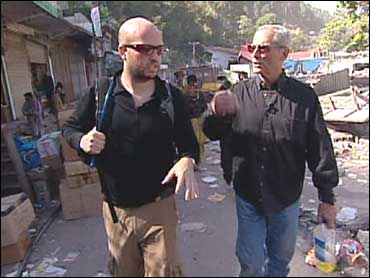 Last fall, a massive earthquake struck Pakistan, killing more than 70,000 people. And then it almost disappeared, from our papers, from our television screens, from our minds. Perhaps it was just one natural disaster too many last year.

But here's the aftershock: after the quake, the situation continued to worsen by the day. Millions were living without shelter and winter was approaching.

In the weeks after the earthquake, correspondent Bob Simon traveled to Pakistan to report on what the United Nations described as the biggest humanitarian nightmare it's dealt with, ever.

Even if you've read about the earthquake, even if you've seen the pictures, nothing can prepare you for being there. It's hard to imagine that all the destruction happened in two minutes.

The towns look like they had been bombarded by a brutal air force for weeks. It's hard to believe that this happened five weeks ago. It could have been yesterday. Nothing has changed. Even the horizon is still strewn with rubble.

There are sights which defy belief. Streets are littered with clothing, sent up by charities and discarded by people. They don't need tattered shirts. They need shelter, food, water, medical care.

The large relief agencies and governments are doing what they can in the cities and the towns, building tent cities for the homeless and handing out food.

But go up into the mountains and you will find a different story. Helicopters drop food to villages, but there are no relief workers on the ground. Except for 13 paramedics from New York City.

They came to Pakistan with no backing or support or agenda except to help. They wound up in Pakistani Kashmir, a disputed territory of undisputed beauty.

When they were dropped off here, Chris Summers was surprised to learn they were the only aid workers there. "I can't believe we haven't seen anyone else in this valley," Summers says.

"There's such a need here. You know? And we're isolated here. I don't really know what's happening in the rest of the country. But in this valley, Jeelum Valley, an enormous need and how is it possible that it's just us, you know, 13 knuckleheads from New York here?"

Knuckleheads? This is Osama bin Laden country, dotted with training camps for jihadists, where Islam is at its most radical and America is seen as the enemy.

But now, people were walking for miles to be treated by the Americans. Some 200 a day were making their way to the clinic, people who were being cared for for the first time since the earthquake.

Joe Connelly works at St. Vincents Hospital in midtown Manhattan but is now cleaning wounds and treating infections that could kill if left untreated.

"I mean we're saving lives, many lives, every single day. You know, as a paramedic in New York City once in a while you have a direct influence on life and death. Here it's happening every half an hour," says Connelly.

In New York their job is to keep a patient alive and drive that ambulance to the nearest hospital. Here there are no hospitals or ambulances. No stretchers, either, except one which they made out of floorboards.

Their clinic is a tent next to a military hospital which had been demolished. There was no running water and no electricity, so they were operating by flashlight. And there were tremors and aftershocks all the time.

Yaser Bashir Coker brought his little sister to the clinic and says he had never seen Americans before coming to the clinic.

His first impression? "They are very cooperative, beautiful and handsome."

Nick Lobel-Weiss works at New York's Roosevelt Hospital and was instrumental in putting together this group of beautiful and cooperative people.

Asked what inspired him and his group to travel to Pakistan and work under these difficult conditions, Lobel-Weiss says, "I think health care. Health care workers want to help people."

Why did the group of 13 come to Pakistan, despite the fact they had no connection to the country and had never been there before?

"Maybe we're New Yorkers and we don't want to take no for an answer," says Lobel-Weiss.

Word of where they were and what they were doing was getting out, not only to Pakistanis needing care, but to relief organizations. Several sent people to help, so the New Yorkers decided it was time to move further on, to places where help had not arrived.

The only way to go was by mule train, laden with supplies the paramedics had begged, borrowed and pilfered from every stockpile they had passed.

60 Minutes joined them on the trek, going further up the valley into an area which has been forbidden to foreigners for the last 50 years. It is, in fact, a war zone, a rugged region close to the contested border between Pakistan and India.

There were occasional remnants of a road, where it hadn't collapsed into the ravines, where it hadn't been buried by landslides. But you couldn't get anywhere on this road. At least not in a vehicle. The fault line seemed to be everywhere.

The first town on the way was Chinari. There are survivors in the town but little else is left of Chinari except a post office box.

More than 10,000 people perished around here, many of them children who were crushed when their schools collapsed. Many of the dead children are still buried underneath the rubble.

With every step, there was another tale of tragedy, stories of entire families wiped out.

"I lost about 25 members of my family in my 12 homes," a local man told the group. "And the same story is everywhere."

"I mean, I don't know what kind of smoke signal needs to go up to know that this village is devastated," says Lobel-Weiss.

"Smoke signals" are being picked up in other parts of the country.

The U.S. military has sent in badly needed helicopters. It has set up a MASH unit in the worst-hit city, and brought in Seabees to help in reconstruction.

The U.S. is doing more than any other country, and freely admits it is being active, at least in part, for strategic reasons, to combat anti-Americanism in a Muslim nation.

And, as it learned in Indonesia, when the U.S. military went in after the tsunami, nothing does this as well as helping people after a disaster.

This is not why the New York medics came here, of course. They didn't come to win hearts and minds, but to save lives. Hearts and minds just seemed to follow, and that's fine with Dr. Steve Muth.

"We can inoculate an entire valley, if we're lucky, against radical Islam," says Muth. "And it's so simple. I'm just a paramedic. It's just a bandage. It's not a $100 million dollar ad campaign from Madison Avenue. It's not, you know, it's not complicated. Could something work better to change somebody's mind? I can't think of anything."

The mule train took them to a place called Kahtay, to their new clinic in another field of rubble. It was now three weeks since the earthquake and they were the first help to arrive.

They went to work right away, treating wounds, infections, gangrene, dysentery and pneumonia. There's already lots of pneumonia and there will be a lot more now that winter's coming.

There wasn't always a translator, so they all had to find other ways to communicate.

"One guy came up to me yesterday," Summers recalls, "and was holding out his hands like this. And I'm looking. I'm like, 'Oh does he want treatment?' And he was signalling me to put my hands out and he said, 'We have five fingers, five fingers, arm, arm, elbow, elbow. We're the same.' And then he shook my hand. You know?"

Fourteen-year-old Mehnaz Beebee's hand was caught under rubble and all the medics could do was cut away the dead and gangrenous flesh. Whether she would ever regain use of her hand would depend on how quickly she can be flown by helicopter to a hospital.

"Sometimes you call and you call and those poor people have to wait day after day sitting there," says Connelly.

A helicopter did come, and the paramedics took the patient on the run to a nearby field. But the chopper never landed.

The incident frustrated Connelly. "I mean, when's the next one? Next week?"

The only certainty is the next patient. There's always a next patient. No one had ever seen so many kids with so many head wounds.

But then, an 18-month-old boy was brought into the emergency room. His name is Nadeem and his father carried him down the mountain. The trip took five hours.

Nadeem's mother had a heart attack and died when she saw their house collapse and kill ten family members. And now, Nadeem is dying.

The little boy had hardly eaten since the earthquake, has double pneumonia and is dangerously dehydrated. The only hope is to get some fluid into him quickly and to get the Pakistani army to send in a chopper.

"We need to get him out of here. He's completely unresponsive. He's not responding to anything anymore," Suarez informs a Pakistani doctor over the field phone.

They can't find a vein, so they have to inject the drip directly into his shinbones. After tense moments, there is finally a sign of life.

"Look at him open his eyes now!" Summers says.

The little boy started to cry, an amazing sight to Summers. "I mean, we thought he was about to die."

And things got even better. A chopper landed and the medics handed the boy over to his father.

Two days after that helicopter took off, 60 Minutes found Nadeem in a Pakistani hospital. He was doing okay. We also learned that Mehnaz Beebee, the girl who had been left behind, was picked up eventually and taken to a hospital as well.

And the New York medics? A few months later, they made a return trip to Pakistan and treated thousands more people. Which was appreciated, since donations given to the victims of this earthquake fell far short of what was needed.

[Editor's Note: Nick Lobel-Weiss e-mailed us the following update on what NYC Medics has been doing since the first airing of our report.]

After our return from Pakistan and the airing of the 60 Minutes segment, our new organization, NYC Medics, raised nearly one million dollars in donations, in-kind contributions and equipment.

In February, with support from the Disaster Resource Network of the World Economic Forum, we returned to Pakistan, this time to the remote Northwest Frontier Province. We set up a larger field hospital and treated 10,000 people in less than one month.

We also contacted The Weyerhaeuser Company, who agreed to donate hundreds of shelters for homeless earthquake victims. UPS provided the shipping. We made sure the shelters got to widows and their children in the mountains.

NYC Medics is now prepared to respond to the next disaster, wherever it may occur. To find out more about us, and to contribute toward our next mission, visit our website at www.nycmedics.org.
By Michael Gavshon/Solly Granatstein