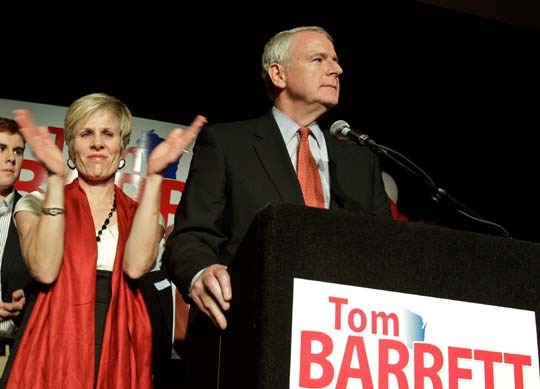 (CBS News) After a loss in Wisconsin's gubernatorial election Tuesday night, Milwaukee Mayor Tom Barrett took another blow - literally - when one of his own supporters slapped him.

Barrett, who was challenging incumbent Gov. Scott Walker in a closely-watched recall election, to Walker 54 percent to 45 percent. The mayor conceded the race late Tuesday night, saying that while "the state remains divided," he hopes all sides will remain engaged to serve the interests of Wisconsin families.

According to Sater, she asked Barrett if she could slap him for conceding, and Barrett said he'd rather give her a hug. He leaned down, presumably for the hug, and got socked instead. WISN captured the incident on on video.

"She was upset with the mayor she came up and slapped him, and said, how dare you concede while there are people still trying to vote," Sater said. "This woman, upset about that, and she slapped the mayor. He seemed very stunned by the fact that she had done that."

The Milwaukee mayor did not comment on camera about the incident, but was reportedly very surprised by the woman's actions.

Watch video of the incident below, via TPM.