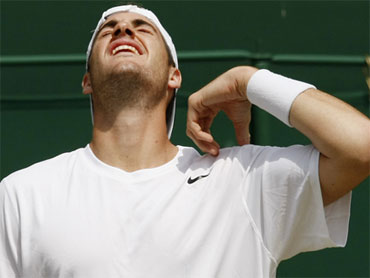 One day after winning the longest tennis match in history, John Isner lost the shortest men's match at Wimbledon so far this year.

The marathon man looked weary from the outset Friday, required treatment for a neck injury and was beaten by unseeded Thiemo de Bakker of the Netherlands 6-0, 6-3, 6-2.

The match was over in just 1 hour, 14 minutes, and the five games won by Isner were the fewest by a male player this week.

It was a complete turnaround from Isner's epic three-day victory over Nicolas Mahut, which lasted 11 hours, 5 minutes and went to 70-68 in the fifth set.

What's more, Isner served no aces Friday after hitting a record 112 against Mahut.

"I've never been this exhausted before," Isner said. "Mentally and physically, I was obviously a bit drained. I just didn't have much in the way of my legs. I was just low on fuel out there. Didn't really have a chance."

Starting shortly after noon in warm sunshine, Isner received a standing ovation when he walked onto court. He immediately lost his serve - something that didn't happen once in his 70-68 fifth set against Mahut.

"The turnaround time - he just didn't have enough time to get his body right," said Isner's coach, Craig Boynton. "He's one tired boy."

Isner didn't warm up before taking the court and showed up unshaven. He dropped the first set in 16 minutes, winning only nine points while committing 11 unforced errors.

"It was brutal," Isner said. "Things were looking pretty bleak right from the get-go."

After the set, he took an injury timeout and received a neck massage from a trainer. Boynton said Isner's neck began to stiffen after the Mahut match.

Following the loss, Isner pulled out of doubles before his first-round match with partner Sam Querrey, citing fatigue and a blister on his small left toe.

"Your body's like, 'Hey, what are you doing to me here?"' Boynton said. "I mean, that match seemed like it was two weeks long."

The crowd roared on Court 5 when Isner finally won a game after 32 minutes to trail 2-1 in the second set. His shots began to show more zip, but his movement remained sluggish. Several times he didn't even pursue shots, and when he buried a forehand in the net in the third set, he bent over with his hands on his knees.

"Of course," de Bakker said. "I mean, 70-68, it's pretty sick. People at home who didn't know it, watching it, I mean, they'll probably think it's a mistake. It's unbelievable."

Isner's average first serve was 114 mph, well off his normal pace, which often tops 130. He won less than half his service points and never reached break point on de Bakker's serve.

"I wouldn't have bet a lot of money on him today," said Isner's mother, Karen. "But he did his best."

The listless performance was hardly surprising, given the victory over Mahut lasted a record 183 games and more than 11 hours of play. The records were mind-boggling:

Most consecutive service games held: 168 (84 each)

Isner said he plans to head home to Tampa, Fla., for a well-deserved break. What will he do?

"Really just anything but tennis," he said. "I'll watch sports. I'll take in the World Cup. I'll go fishing. I'll do whatever. Just anything away from the tennis court."

Clijsters and Henin will play each other for the 25th time, but in a Grand Slam for the first time since 2006. Their rivalry stands at 12-12 and has become friendlier over the years.

"It's obviously not the same as in the beginning," Clijsters said. "We've definitely grown up. We've had great times together playing Fed Cup and just messaging each other on phones, teasing each other, fun, you know, relax. I think that's how I would have liked it to have always been."

Both Belgians have mounted career comebacks from retirement. Clijsters last played at Wimbledon in 2006, Henin in 2007.

Clijsters won their previous meetings this year in Brisbane and Key Biscayne.