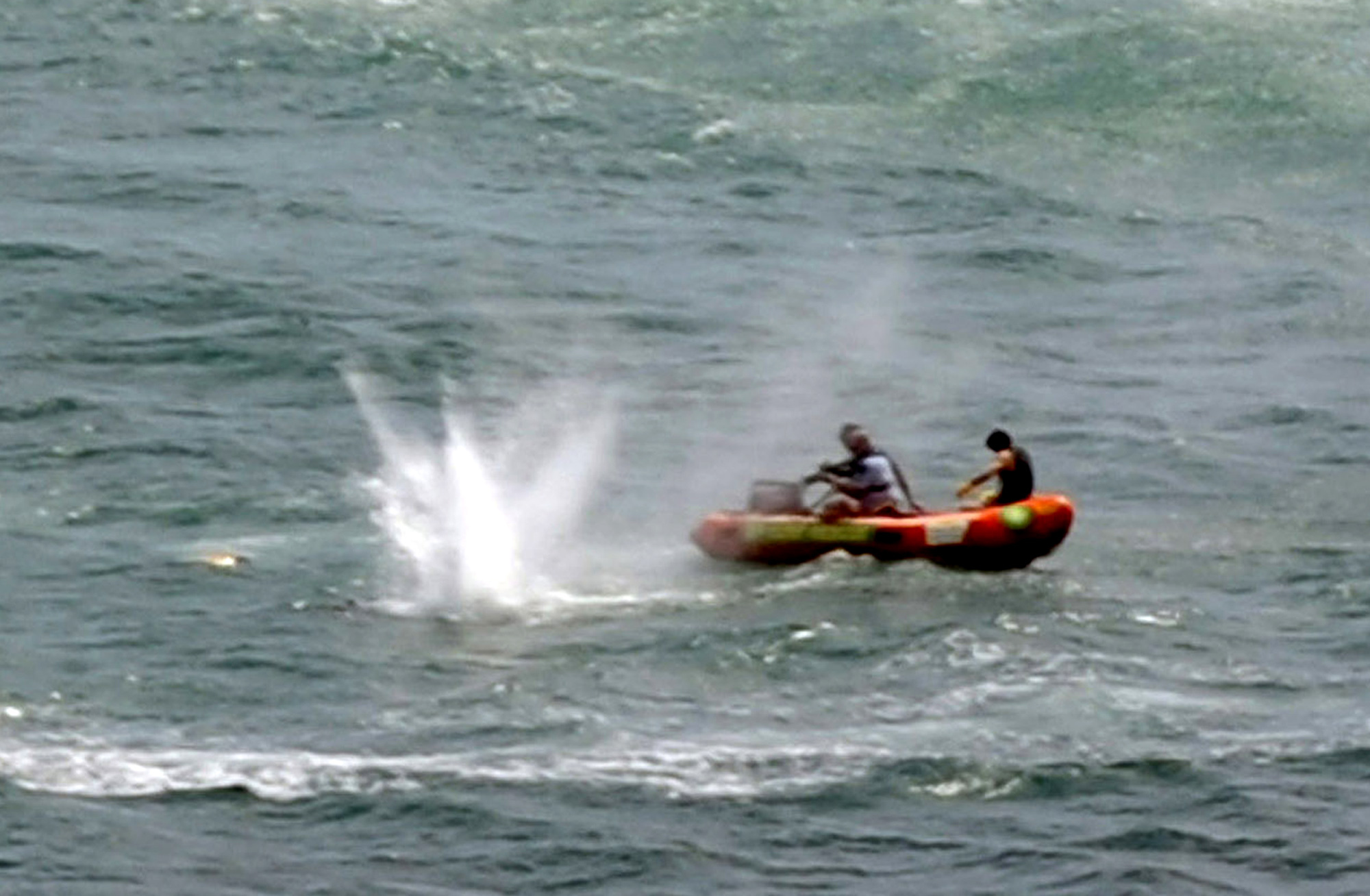 WELLINGTON, New Zealand About 150 friends and family of a man killed in a shark attack wrote messages to him in the sand Thursday and stepped into the water at a New Zealand beach to say goodbye.

Adam Strange, 46, was an award-winning television and short film director and the father of a 2-year-old girl. He was training for an endurance swim near popular Muriwai Beach on Wednesday when he was attacked by the shark that was possibly 14 feet (4 meters) long. Surf lifesavers say they are convinced it was a great white shark.

Police attempting to save Strange raced out in inflatable boats and fired gunshots at the enormous predator, which they say rolled away and disappeared. Police were able to recover Strange's body, and lifeguards believe the shark is dead.

A man who recorded cell phone video of the police shooting at the shark (scroll down to watch video) told the New Zealand Herald that the rescue personnel who responded to the attack were "brave."

"It can't be easy, sitting on an inflatable, it was a little bit choppy and windy ... sitting in there, firing something like that rifle with guys in the inflatable and if someone tumbled out, I didn't know if there were more than one shark there if there was," Nigel Bradbury told the Herald.

Muriwai will remain closed for swimming until Saturday after the fatal attack, one of only about a dozen in New Zealand in the past 180 years.

Friend Adam Stevens said the Thursday beach service was run by indigenous Maori who removed the "tapu" or spiritual restriction at the beach. He said it was a "perfect tribute" to a man who spent much of his time swimming and surfing.

"He was a very robust, big, barrel-chested surfer," Stevens said. "He was basically completely obsessed with the ocean, with paddle boards and body surfing, everything. His garage was like a museum of surf craft."

According to Police Inspector Shawn Rutene, Strange was about 200 meters (650 feet) from the shore when he was attacked by a shark that police estimated was up to four meters (14 feet) long.

Stevens said his friend had planned to swim about 1 Â½ kilometers (one mile) Wednesday as he tested new goggles and trained for an annual endurance swim from Auckland to Rangitoto Island. The 4.5-kilometer (2.8-mile) swim takes place on Sunday.

Pio Mose, who was fishing at the beach Wednesday, told the New Zealand Herald newspaper he saw Strange struggle against the huge shark. Mose yelled at Strange to swim to the rocks, but it was too late.

"All of a sudden there was blood everywhere," Mose said. "I was shaking, scared, panicked."

About 200 people had been enjoying the beach during the Southern Hemisphere summer at the time of the attack.

Stevens said he's been comforting Strange's wife, Meg, and their daughter since the accident. He said the girl is too young to understand what has happened but is aware of the emotions.

Stevens said his friend, whom he had known about 15 years, was very creative and always positive.

"He lived in the moment brilliantly. It was completely infectious," Stevens said. "He feasted on the details."

Stevens said he and Strange worked together for a number of years at a film production company, Silverscreen.

On his site, Strange said he studied as a graphic designer and art director before getting into directing. He said he'd worked on commercials all over the world and had been a finalist for a number of advertising awards.

Strange won a Crystal Bear award at the 2009 Berlin Film Festival for a short film called "Aphrodite's Farm," a magical tale set on a dairy farm in the 1930s.

Tim Jago, chairman of the Muriwai Lifeguard Service, said a number of beaches near Muriwai reopened Thursday and that Muriwai would open for beach visits Friday and then swimming on Saturday. He said the closure at this point is to give surf lifesavers a break and he doesn't fear a repeat attack.

"We are quite comfortable the beast is dead," he said. "Footage from a helicopter indicates that when the shark rolled over and rolled off, it also sank to bottom."

Jago said witnesses spotted one or two other large sharks circling at the time of the attack, but that no sharks have been seen in the area since then.

Clinton Duffy, a shark expert with the Department of Conservation, estimated that only 12 to 14 people have been killed by sharks in New Zealand since record keeping began in the 1830s.

Around the world, sharks attacked humans 80 times last year, and seven people were killed, according to the University of Florida's International Shark Attack File. The death toll was lower than it was in 2011 but higher than the average of 4.4 from 2001 to 2010.