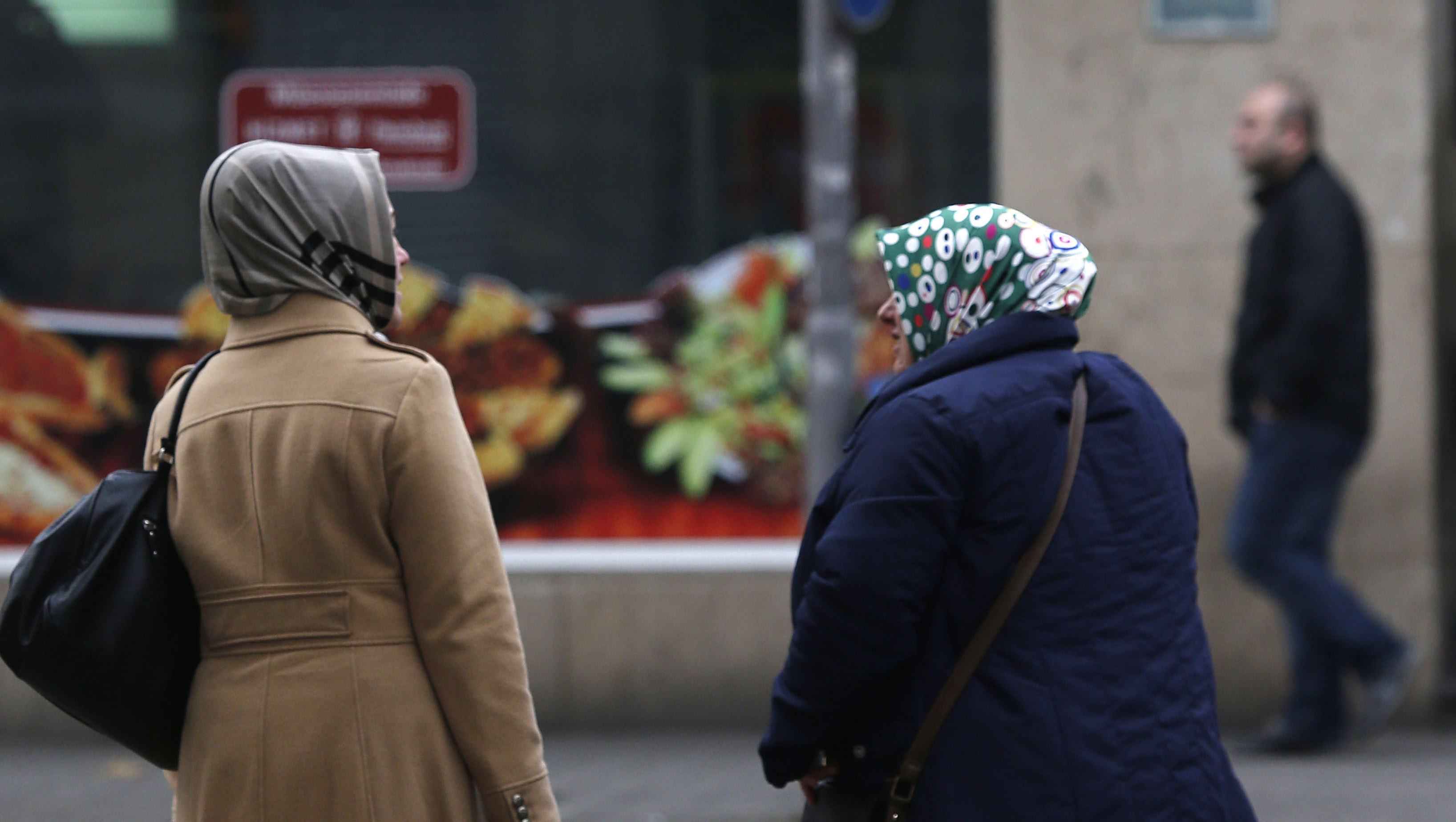 BERLIN -- The headlines would suggest Europe is under siege: Thousands of Germans march against the continent's "Islamization." French readers flock to read a novel about a Muslim president who imposes Sharia law on their country. Commentators warn darkly about an encroaching age of "Eurabia" in the wake of the Paris terror attacks.

But is Europe actually heading toward Islamization?

Research shows that Europe's Islamic population has indeed risen sharply over the last two decades, and continues to grow. But the numbers fall far short of any possibility of Europe becoming predominantly Muslim. And there are little signs that Islamic culture is spreading beyond the boundaries of Muslim communities - let alone becoming dominant in Europe.

The Pew Forum published research in 2011 predicting that Europe's Muslim population will almost double to nearly 57 million by 2030, from just under 30 million in 1990. That may seem like a lot, but it still means that Europe's Muslim population would only increase from 4.1 percent to 7.8 percent, according to the Pew paper. Moreover, the Pew report says that the period of greatest growth in Islamic populations is already past.

"As Muslims become more integrated, they tend to have fewer children," said Brian J. Grim, president of the Religious Freedom & Business Foundation, who worked on the Pew report. "Based on the demographic data, Europe cannot be Islamized, if by that is meant demographic dominance."

If population trends don't point toward Islamization, could there be a cultural change with the same result? In London, Paris, Berlin and other major European cities, anti-Muslim sentiment is frequently directed against the growth of mosques, halal butchers and Islamic dress in the streets - with many seeing them as infringements on European norms.

Following major Islamist terror attacks in London and Paris, anxieties are soaring in Europe about the rapid growth of a culture that, its critics say, simply refuses to adopt the values of the host country. Ordinary people across Europe are increasingly wary of the insular-looking Islamic communities that have cropped up in major European cities, and feel that its members are hostile to the European mainstream.

A stream of news stories about homegrown Islamic youths traveling to Syria to wage jihad with the Islamic State of Iraq and Syria (ISIS) has tended to put the entire Muslim community under a pall of suspicion. Meanwhile, the attack in Paris on a Jewish supermarket following the murder spree against cartoonists at the satirical weekly Charlie Hebdo has caused many Jews to consider fleeing Europe and moving to Israel. Last month, after a deadly terror attack in Denmark, Israel's Prime Minister Benjamin Netanyahu encouraged Europe's Jews to leave.

Kathrin Oertel, one of the founders of the group Patriotic Europeans against the Islamization of the West, or PEGIDA, and one of the key figures behind the rallies in the German state of Saxony, says Muslims are eroding German cultural identity.

"In Europe, there are some countries where Islamization has gone so far that it affects the culture and life there," said Oertel, who has since left PEGIDA to form her own group.

Mainstream conservative politicians, too, have responded angrily to news reports of Muslims refusing to assimilate. Often, they center on Muslim parents who refuse to let daughters take part in co-ed swimming lessons, or Muslim students insisting that a prayer room be available at a university that already has a chapel.

Cases such as that of Germany's "Shariah Police" go further.

Last September, about a dozen Muslim men donned high-visibility vests and patrolled the streets of Wuppertal, Germany, handing out leaflets declaring the area to be a "Shariah-controlled zone" where alcohol, music and pornography were banned. Their behavior prompted a sharp outcry in the German media. But there was no evidence that it had broad support among Wuppertal's Muslim population - and the group has since disappeared from public sight.

Isolated, and ultimately unsuccessful cases such as the Shariah Police appear to be the exception that underscores a general rule: Muslim customs such as wearing a headscarf or praying at the mosque are not entering the European mainstream. In fact, many Muslims in Europe don't even adhere to them.

Europe does have hardcore Islamist groups such as Islam4UK in Britain or Sharia4Holland, which have campaigned for an Islamic future for Europe. And among the thousands of Europeans who have traveled to Syria and Iraq to join Islamic extremist groups there have been those who believe they will eventually fight a holy war to conquer Europe. But they are a vanishingly small minority of Europe's diverse and overwhelmingly secular Muslim population.

"Most Muslims don't go to mosques and even those who do aren't all extremists," said Aiman Mazyek, chairman of Germany's Central Council of Muslims. "Unfortunately, Muslims are quickly put under general suspicion whenever there is some kind of attack."

Samuel Behloul - an academic who spent 12 years at the University of Lucerne studying Muslim migration to Switzerland - says the idea of Islamization is largely the result of a change in the immigration debate since the 9/11 terror attacks in the United States. Previously, Muslims hadn't been widely perceived as a distinct group of immigrants, but rather by their countries of origin - Turks in Germany, Algerians in France and Pakistanis in Britain, for example. After Sept. 11, the focus fell on religion, he said, and what the growing number of Muslims in Europe might mean for the continent's identity.

Behloul said that in his interviews with young Muslims - some liberal, others conservative - none has spoken out in favor of replacing secular with Islamic laws.

Still, the January terror attacks in Paris have revived the idea of dangerous "no-go areas" for non-Muslims in European cities. Fox News came under international ridicule when a commentator said that non-Muslims don't go into the British city of Birmingham.

The city of Paris filed a lawsuit against the American network in February over claims by a different commentator that there are parts of the French capital where non-Muslims can't tread. Fox has apologized, saying its guest had made an error during a program exploring the reasons for the Paris terror strikes.

It is true that Paris areas such as Grande Borne - a predominantly Muslim housing project - are considered so dangerous that police prefer to operate there in groups of 10 or more.

However, the danger they face is not from Islamists but from drug dealers. Police union representative Claude Carillo says the pushers deploy school dropouts as young as 12 as lookouts and enforce what he calls "the diktat of the delinquents."