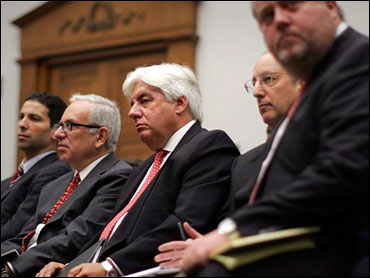 Less than a week after the federal government had to bail out American International Group Inc., the company sent executives on a $440,000 retreat to a posh California resort, lawmakers investigating the company's meltdown said Tuesday.

The tab included $23,380 worth of spa treatments for AIG employees at the coastal St. Regis resort south of Los Angeles even as the company tapped into an $85 billion loan from the government it needed to stave off bankruptcy.

The retreat didn't include anyone from the financial products division that nearly drove AIG under, but lawmakers were still enraged over thousands of dollars spent on catered banquets, golf outings and visits to the resort's spa and salon for executives of AIG's main U.S. life insurance subsidiary.

"Average Americans are suffering economically. They're losing their jobs, their homes and their health insurance," House Oversight Committee Chairman Henry Waxman, D-Calif., scolded. "Yet less than one week after the taxpayers rescued AIG, company executives could be found wining and dining at one of the most exclusive resorts in the nation."

The hearing also revealed that AIG executives hid the full range of its risky financial products from auditors as losses mounted, according to documents released Tuesday by a congressional panel examining the chain of events that forced the government to bail out the conglomerate.

The panel sharply criticized AIG's former top executives, who cast blame on each other for the company's financial woes.

"You have cost my constituents and the taxpayers of this country $85 billion and run into the ground one of the most respected insurance companies in the history of our country," said Rep. Carolyn Maloney, D-N.Y. "You were just gambling billions, possibly trillions of dollars."

AIG, crippled by huge losses linked to mortgage defaults, was forced last month to accept the $85 billion government loan that gives the U.S. the right to an 80 percent stake in the company.

Waxman unveiled documents showing AIG executives hid the full extent of the firm's risky financial products from auditors, both outside and inside the firm, as losses mounted.

For instance, federal regulators at the Office of Thrift Supervision warned in March that "corporate oversight of AIG Financial Products ... lack critical elements of independence." At the same time, Pricewaterhouse Cooper confidentially warned the company that the "root cause" of its mounting problems was denying internal overseers in charge of limiting AIG's exposure access to what was going on in its highly leveraged financial products branch.

Waxman also released testimony from former AIG auditor Joseph St. Denis, who resigned after being blocked from giving his input on how the firm estimated its liabilities.

Three former AIG executives were summoned to appear before the hearing. One of them, Maurice "Hank" Greenberg - who ran AIG for 38 years until 2005 - canceled his appearance citing illness but submitted prepared testimony. In it, he blamed the company's financial woes on his successors, former CEOs Martin Sullivan and Robert Willumstad.

"When I left AIG, the company operated in 130 countries and employed approximately 92,000 people," Greenberg said. "Today, the company we built up over almost four decades has been virtually destroyed."

Sullivan and Willumstad, in turn, cast much of the blame on accounting rules that forced AIG to take tens of billions of dollars in losses stemming from exposure to toxic mortgage-related securities.

Lawmakers also upbraided Sullivan, who ran the firm from 2005 until June of this year, for urging AIG's board of directors to waive pay guidelines to win a $5 million bonus for 2007 - even as the company lost $5 billion in the 4th quarter of that year. Sullivan countered that he was mainly concerned with helping other senior executives.

Sullivan also came under fire for reassuring shareholders about the health of the company last December, just days after its auditor, Pricewaterhouse Cooper, warned of him that AIG was displaying "material weakness" in its huge exposure to potential losses from insuring mortgage-related securities.

AIG's problems did not come from its traditional insurance subsidiaries, which remain healthy, but instead from its financial services operations, primarily its insurance of mortgage-backed securities and other risky debt against default. Government officials feared a panic might occur if AIG couldn't make good on its promise to cover losses on the securities; investors feared the consequences would pose a threat to the U.S. financial system, which led to the government bailout.

AIG suffered huge losses when its credit rating was cut, thanks largely to complex financial transactions known as "credit default swaps." AIG was a major seller of the swaps, which are a form of insurance, though they are not regulated that way.

The swap contracts promise payment to investors in mortgage bonds in the event of a default. AIG has been forced to raise billions of dollars in collateral to back up those guarantees.

Sullivan said many of the firm's problems stemmed from "mark to market" accounting rules mandating that its positions guaranteeing troubled mortgage securities be carried as tens of billions of dollars in losses on its balance sheet.

This in turn, said former AIG chief executive Willumstad, who ran the company for just three months after Sullivan left, forced the firm to raise billions of dollars in capital. The federal rescue came after AIG suffered disastrous liquidity problems after its credit rating was lowered, forcing the company to come up with even more capital.

"AIG was caught in a vicious cycle," Willumstad said in the testimony.

But Sullivan said the complex swaps had underlying value, even as the market for them froze, sending their book value plummeting and forcing AIG to scramble for collateral.

"When the credit markets seized up, like many other financial institutions, we were forced to mark our swap positions at fire-sale prices as if we owned the underlying bonds, even though we believed that our swap positions had value if held to maturity," Sullivan said.

The hearing is the second in two days into financial excesses and regulatory mistakes that have spooked stock and credit markets and heightened fears about a global recession.

The Fed rescued AIG on Sept. 16, one day after investment bank Lehman Brothers declared bankruptcy when the government wouldn't come to its aid. Lehman Brothers' chief executive officer testified Monday before the congressional oversight panel but didn't shed much light on how the mid-September events cascaded into a collapse of credit markets requiring a broad bailout.

Richard S. Fuld Jr., chief executive officer of Lehman Brothers, declared to the committee "I take full responsibility for the decisions that I made and for the actions that I took." He defended his actions as "prudent and appropriate" based on information he had at the time.

"I feel horrible about what happened," he said.