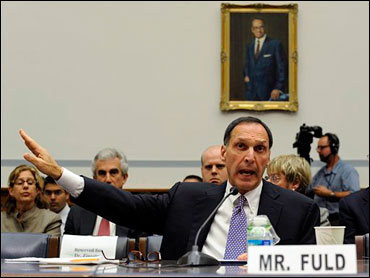 Days from becoming the largest bankruptcy in U.S. history, Lehman Brothers steered millions to departing executives even while pleading for a federal rescue, Congress was told Monday.

As well, executives who feared for their bonuses in the company's last months were told not to worry, according to documents cited at a congressional hearing. One executive said he was embarrassed when employees suggested that Lehman executives forgo bonuses, and cracked: "I'm not sure what's in the water."

The first hearing into what caused the nation's financial markets to collapse last month, precipitating a $700 billion bailout, opened with finger-pointing and glimpses into internal company documents from Lehman's chaotic last hours.

Rep. Henry Waxman, D-Calif., chairman of the House Oversight and Government Reform Committee, said the giant investment bank was "a company in which there was no accountability for failure." Lehman's collapse set off a panic that within days had President Bush and Treasury Secretary Henry Paulson asking Congress to pass the rescue plan for the financial sector.

Richard S. Fuld Jr., chief executive officer of Lehman Brothers, declared to the committee "I take full responsibility for the decisions that I made and for the actions that I took." He defended his actions as "prudent and appropriate" based on information he had at the time.

"I feel horrible about what happened," he said.

Waxman questioned Fuld on whether it was true he took home some $480 million in compensation since 2000, and asked: "Is that fair?"

Fuld took off his glasses, held them, and looked uncomfortable. He said his compensation was not quite that much.

"We had a compensation committee that spent a tremendous amount of time making sure that the interests of the executives and the employees were aligned with shareholders," he said. Fuld said he took home over $300 million in those years - some $60 million in cash compensation.

Waxman read excerpts from Lehman documents in which a recommendation that top management should forgo bonuses was apparently brushed aside. He also cited a Sept. 11 request to Lehman's compensation board that three executives leaving the company be given $20 million in "special payments."

"In other words, even as Mr. Fuld was pleading with Secretary Paulson for a federal rescue, Lehman continued to squander millions on executive compensation," Waxman said before Fuld appeared as a witness.

With its clients clamoring for safe investments with above average return, the big Wall Street investment houses, including Lehman Brothers, bought up millions of the least dependable mortgages, chopped them up into tiny bits and pieces and repackaged them as exotic investment securities that hardly anyone could understand, 60 Minutes' Steve Kroft reports.

The government let Lehman go under Sept. 15, only to bail out insurance giant American International Group the next day, in a cascading series of financial shocks and failures that put Washington on track for the multibillion-dollar rescue starting the end of that week.

Waxman described that plan as a life-support measure. "It may keep our economy from collapsing but it won't make it healthy again," he said.

That sentiment echoed on Wall Street, where the Dow Jones industrials sank below 10,000 on Monday for the first time in four years. Investors fear the crisis will weigh down the global economy and the bailout won't work quickly to loosen credit markets.

The rescue plan, now law, was so rushed that the usual congressional scrutiny is only coming now, after the fact.

"Although it comes too late to help Lehman Brothers, the so-called bailout program will have to make wrenching choices, picking winners and losers from a shattered and fragile economic landscape," said Rep. Tom Davis of Virginia, the committee's senior Republican.

Waxman said that in January, Fuld and his board were warned the company's "liquidity can disappear quite fast."

Despite that warning, he said, "Mr. Fuld depleted Lehman's capital reserves by over $10 billion through year-end bonuses, stock buybacks, and dividend payments."

Waxman quoted Fuld as saying in one document, "Don't worry" to the suggestion that executives go without bonuses.

That suggestion came from Lehman's money management subsidiary, Neuberger Berman. Waxman quoted George H. Walker, President Bush's cousin and a Lehman executive who oversaw some Neuberger Berman employees, as responding with a dismissive tone to the idea of going without bonuses.

"Sorry team," he wrote to the executive committee, according to Waxman. "I'm not sure what's in the water at 605 Third Avenue today.... I'm embarrassed and I apologize."

Rep. Elijah Cummings, D-Md., said: "I wonder how he sleeps at night."

Fuld said in his statement that the company did everything it could to limits its risks and save itself.

CBS News legal analyst Andrew Cohen noted the company and its executives can't be blamed for the global meltdown.

"But you can bet that sophisticated investigators will be looking at the books to see whether there was any corporate fraud, or any failed reporting requirements, that would support some sort of case going forward," said Cohen.

"If the investigation demonstrates that any individuals within the organization had any sort of criminal intent to defraud anyone, or if any sworn financial statements were inaccurate, we could easily see an Enron-type series of criminal and civil lawsuits. But those would take a long time to emerge and even longer to resolve," said Cohen.