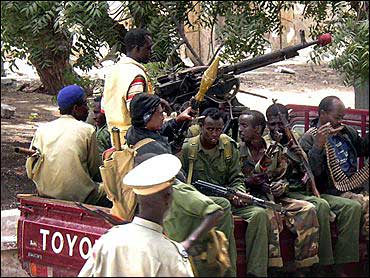 The advance team of an African peacekeeping force to Somalia arrived unannounced in the country on Thursday, a senior police officer said.

Thirty Ugandan troops arrived in a military plane Thursday morning, according to Adan Biid Ahmed, the police chief of the southern town of Baidoa, where the transitional parliament sits.

"This is the first batch of African peacekeepers to be deployed in Somalia," Ahmed told The Associated Press on the phone from Baidoa.

The governor of Baidoa, Mohamed Madey Issaq, and Somali military officials welcomed the troops at the airport.

This comes one day after Secretary-General Ban Ki-moon urged Sudan's government to stop aerial bombings in Darfur, deploring attacks that have killed innocent civilians in the escalating conflict.

In a report to the Security Council on Wednesday, Ban also called on countries to provide "urgent contributions of human resources and equipment" for a three-phase plan to deploy a joint U.N.-African Union peacekeeping force to Darfur.

The second phase, which would send more than 3,000 U.N. troops to Darfur, would cost $287.9 million over a six-month period, Ban said. The plan is supposed to culminate with the deployment of a 22,000-strong AU-U.N. force, but Sudan's government has resisted the idea.

Although Sudan's government has denied indiscriminately bombing villages, Ban's report described airstrikes that have killed more than a dozen civilians since December. Ban said bombings of rebel strongholds have intensified in the past month, though he gave no specific casualty figures for that period.

"I particularly deplore the aerial bombings by Sudanese government forces, which have expanded to new areas since 19 January, resulting in more civilian casualties and suffering," Ban said.

Darfur's conflict erupted in 2003 when ethnic African rebels took arms against the Arab-dominated central government, accusing it of neglect. More than 200,000 people have died and 2.5 million have fled their homes. The government is accused of unleashing militias known as the janjaweed blamed for the bulk of the conflict's atrocities.

Ban's report described a particularly bloody period over the past three months in which scores of civilians were killed.

The report highlighted escalating violence against aid workers in a region where two-thirds of the population relies on humanitarian assistance.

Ban demanded that the government hold accountable police and security officials who arrested and assaulted 20 people — including five U.N. staff members — in South Darfur's capital of Nyala on Jan. 19. One female U.N. worker was sexually assaulted, the report said.

Sudan's mission to the U.N. did not immediately return calls seeking comment.

The U.N. chief also called on Sudanese President Omar al-Bashir to "uphold his commitment" to the three-phase AU-UN peacekeeping plan. The first phase — which added equipment, military officers and U.N. police to the AU operation — is almost complete.

The U.N. hopes to start implementing the second phase this spring. But al-Bashir has sent conflicting signals about his commitment to the initiative, saying last month that U.N. troops were not required in Darfur because the 7,000-member AU force on the ground could maintain order.