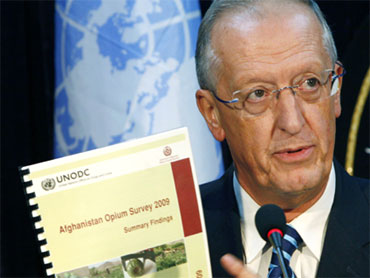 (AP Photo/Musadeq Sadeq)
As President Obama heads to Camp David for the Labor Day weekend, his vacation reading is the sobering Afghanistan war report by U.S. and NATO General Stanley A. McChrystal, but he would be well-advised to add to his bedside literature the United Nation's new report on the increase of drug cartels in Afghanistan.

"Afghan Opium Survey 2009," was released Wednesday in Kabul by the U.N. Office on Drugs and Crime (UNODC).

The report reads like a John Le Carré spy novel. The headline is that opium poppy cultivation in Afghanistan is down, but UNODC Executive Director Antonio Maria Costa (pictured above) also concludes the war-torn country now has its very own drug cartels; that insurgents are moving up the "value chain" in the drug trafficking business, not merely taxing supply (which they have done for years), but now working with criminal gangs and corrupt officials to produce, process, stock, and export opium.

Costa's findings are ominous: More must be done to control drugs in Afghanistan, not just because it is a major source of income for poor farmers, but because it is the financing "in the killing fields of suicide bombers."

The UNODC report says that, although interdiction is increasing, eradication continues to be a failure. He speaks of a "marriage of convenience" between anti-government insurgents (the same ones who have killed 734 American troops in Afghanistan and neighboring nations since the 2001 U.S. invasion) and criminal groups which has spawned narcotics cartels (similar to the ones in Colombia, South America) in Afghanistan with direct links to the Taliban.

Collusion with corrupt Afghan government officials is creating a crisis of security and law enforcement, and promoting widespread money laundering, the report concludes.

The only good news, if you can call it that, is that prices for opium are at a 10-year low and production is down because of oversupply in Afghanistan.

The report recommends a regional approach to tackle the problem, which should include Iran and Central Asia — a tough sell in Washington given what has happened in post-election Iran.

"Afghan Opium Survey 2009" is a quick read, at 42 pages, with some positive notes on what has been done thus far, but the rise of cartels is something President Obama must seriously consider as he assesses U.S. policy in Afghanistan.