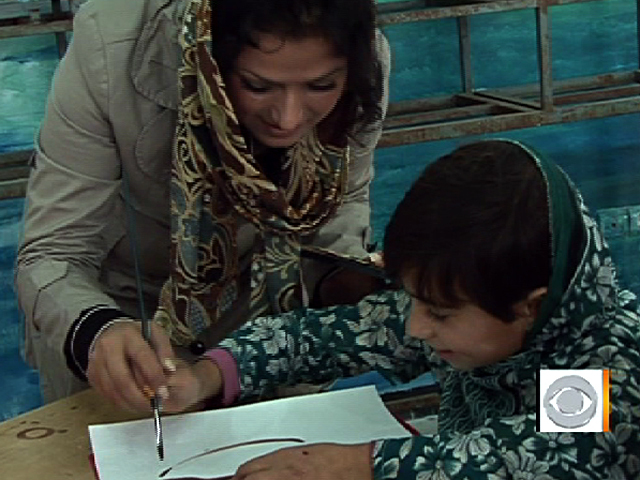 Since the U.S. war in Afghanistan began 10 years ago,  violence has orphaned  tens of thousands of children. One Afghan woman is trying to help them heal - with art.

Roya Doste, CBS News correspondent Mandy Clark reports, is no regular arts teacher, and the kids she teaches are not regular students. Everyone in the classroom  has a personal story of loss.

Doste tells CBS News through an interpreter, "There are 80 kids here and all of them have stories that need to be told. I want to help them express themselves."

Clark says Roya can relate all too well. Her father died in the war with Soviets when she was just 7. Not long after, she picked up a paintbrush. She says art saved her.

"When he died, I couldn't speak of the pain in my heart, except through painting," she says.

The 36-year-old graphic designer had been living in Germany, but quit her job five months ago to help the orphans. Although the war was still going on, she believed  it was finally safe enough to return.

She starts  with small steps. Now, Roya is teaching the children to draw a simple fish. "Some of them are small, some big," she says. "They are making their fish individual."

Others, too, are trying to get the children involved in the arts. This is the first generation since the fall of the Taliban who are allowed to sing, draw, paint or take pictures, all activities forbidden under Taliban rule.

Even outside the classrom, Roya is thinking of her pupils. At the  At the Afghan Youth Festival, where pictures by young Afghan photographers are  showcased, . Roya chose to paint one of the photos,  which depicted child labor.

Roya says, "A young girl took this photo. I'm trying to tell her message in another medium."

But Roya says she is happiest in the classroom, connecting to the children, one-on-one. Each of  their brush strokes, she says, has the power to heal.