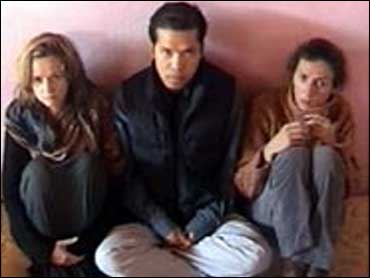 Militants released a video Sunday showing three frightened foreign U.N. hostages pleading for their release, and threatened to kill them unless United Nations and British troops leave Afghanistan and Muslim prisoners are freed from U.S. jails.

In the tape, the hostages — Annetta Flanigan of Northern Ireland, Filipino diplomat Angelito Nayan and Shqipe Habibi of Kosovo — are shown sitting hunched together against the bare wall of a room in an undisclosed location, answering questions from who is speaking to them in broken English from off camera.

Both women are crying, but the trio look to be healthy and unharmed.

Jaish-al Muslimeen, which claims it seized the trio on Thursday in Kabul, said it made the tape and would execute the hostages unless the United Nations and British troops leave Afghanistan.

Ishaq Manzoor, a spokesman for the group, told The Associated Press Sunday that the hostages would be killed in three days if their demands were not met.

"Like in Iraq, the U.N. has to leave," Manzoor said in a satellite telephone call.

But the group's purported leader, Akbar Agha, insisted later that it had set no deadline. "But we do want an early response to our demands," he said.

On the tape, the off-camera man repeatedly asks them why they have come to Afghanistan, then asks why America and NATO have sent troops to Afghanistan and Iraq.

Habibi explains that she is from Kosovo, but her abductor seems unsure where that is.

All three hostages appear frightened. Their interviewer at several points seems to try to reassure them, saying to Flannigan: "Don't cry. Why you cry?"

He repeatedly, sometimes sharply, asks them what they are doing in Afghanistan and does not seem to understand their answers.

Toward the end of the 15 minute video, obtained by APTN in neighboring Pakistan, the interviewer appears to ask Flannigan to cry for the camera, to which she replies: "I have cried and cried and I can't cry anymore."

Finally after 15 minutes, Nayan asks: "Are we going to be released?" and the tape ends.

Manzoor said the kidnappers were also demanding the release of all Muslim prisoners from U.S. custody in Guantanamo Bay, Cuba, and from Bagram, the main American base north of Kabul.

He claimed the group was negotiating with the Afghan government but declined to elaborate.

Officials at the presidential palace could not be reached immediately for comment.

Armed men kidnapped the three in Kabul on Thursday, stirring fears that Afghan militants were copying the bloody tactics of their Iraqi counterparts.

Intelligence officials say Jaish-al Muslimeen, or Army of Muslims, was formed by a little-known Taliban commander about five months ago and has carried out a string of minor attacks.

NATO and U.S. troops and Afghan security forces have mounted extra patrols and roadblocks in and around Kabul since the election workers were forced from their clearly marked U.N. car into a black sports utility vehicle on a busy street.

Officials say the kidnappers' vehicle was seen heading toward Paghman, a valley west of Kabul with a reputation for banditry, but searches also involving U.S. troops have yet to track down the hostages.

The British government has not responded to the demand — reiterated Sunday — that it withdraw its 1,700 troops from the NATO force in Afghanistan. British soldiers serve under U.S. commanders hunting Taliban and al Qaeda militants.

The kidnapping has shocked Kabul's roughly 2,000-strong international community, already on edge after an Oct. 23 suicide attack killed an American woman and an Afghan youngster outside a rug shop.

Many aid groups have ordered their staff to venture out only to travel from home to office and to keep off the streets altogether after dark.

It also threatens to overshadow preparations to install Karzai as the country's first popularly chosen leader after he secured a majority in the Oct. 9 vote.

Election officials are expected to announce the official result some time this week.