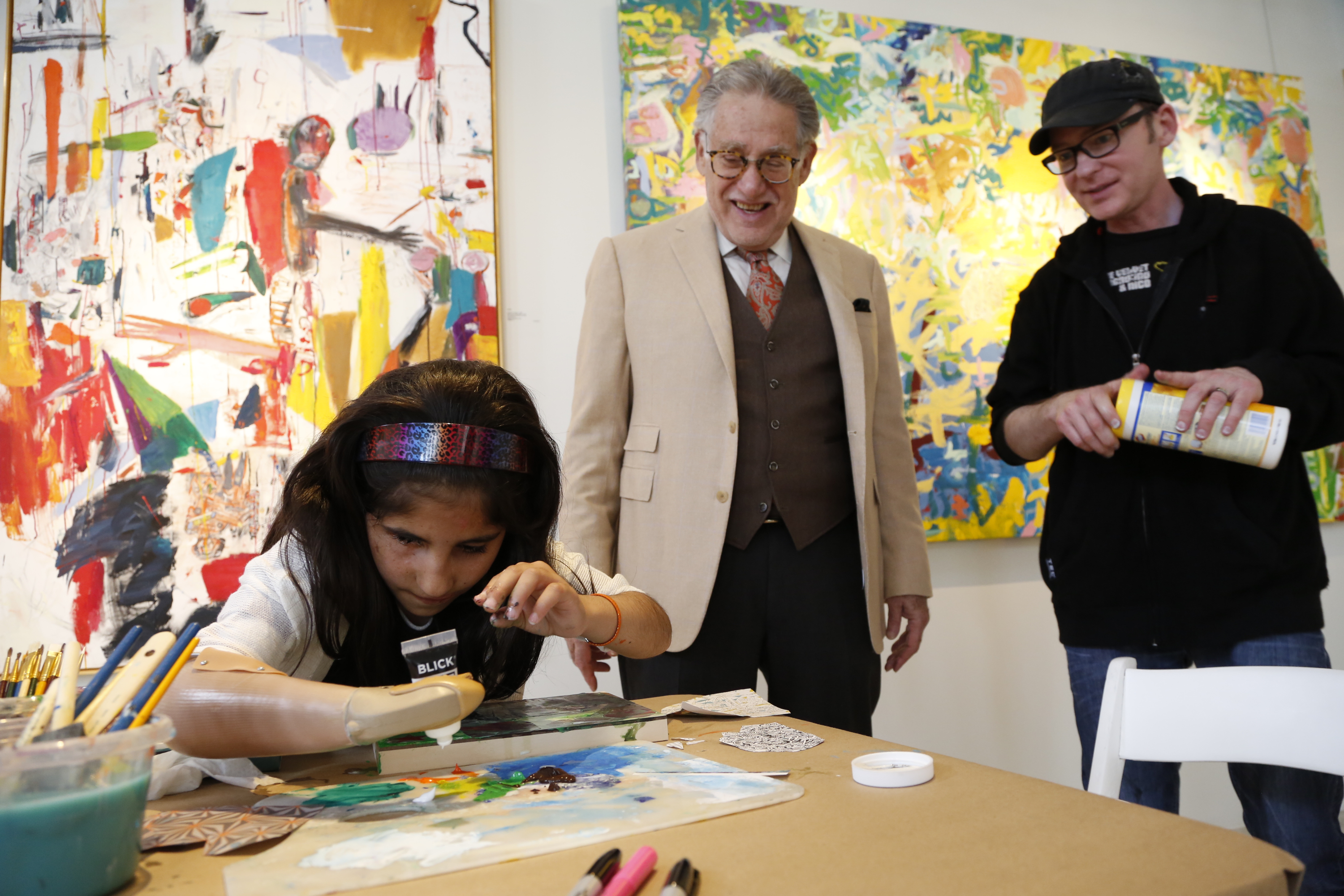 BEVERLY HILLS, Calif. -- The doctors and therapists who worked with a little girl from Afghanistan knew the prosthetic arm they gave her would change her life.

What they didn't anticipate was that within weeks of strapping on her new limb, 7-year-old Shah Bibi Tarakhail would be using it to pick up a brush and begin carving out a new life - of abstract painting.

"What color would you like?" asked artist Davyd Whaley as he sat next to her at a table at the Galerie Michael on Rodeo Drive in the heart of Beverly Hills on Wednesday afternoon.

"That one!" the normally reticent girl responded with a determined voice as she pointed to a tube of blue acrylic. Then, before her mentor could fetch it, she grabbed it with her new prosthetic hand, unscrewed the top with her other hand and began squeezing the tube's contents onto a palette.

As her friends from the nonprofit Children of War Foundation and the Shriners Hospital for Children Los Angeles looked on with delight, Shah Bibi proceeded to put a series of broad brush strokes across a piece of art board Whaley had provided. Soon there were shades of blue, green and bright orange laid out across little stickers of fish, bunnies, a flower and sky that Whaley had showed her how to place on the board beforehand.

At one point she giggled with embarrassment as she accidentally squeezed a tube of orange paint onto the painting rather than the pallete. But Whaley quickly assured her that accidental art sometimes makes the best abstract art.

"You're going to do a Jackson Pollock," he quipped.

The finished result, the artist said afterward, "was pretty mind-blowing."

Shah Bibi, he said, not only handles a brush well but has an impressive grasp of matching colors.

"She kind of has a facility for it if she wants to pursue it," added the artist whose own work is the subject of a large exhibition on display at Galerie Michael.

Less than a year ago, Shah Bibi was back at home in Afghanistan when she went outside one morning to play with her brother. There had been a violent battle pitting Taliban fighters against U.S. military forces the night before, but that was nothing residents weren't used to. Their village had been a cauldron of violence since the Afghan war began.

"There was what looked like a rock that she picked up and threw on the ground and it exploded," said Ilaha Omar, a Children of War Foundation member who brought her to the United States, where Shriners Hospital treated her for free.

The explosion had destroyed her right eye, taken off most of her right arm, put a few scars on her face and killed her brother.

She was a little frightened the first time he saw her, said David Kraft, a prosthetist who helped fit her with her new arm. But she quickly warmed to the people around her and impressed them with how quickly she learned how to use it.

She'll return to her family next week, but Children of War plans to bring her back next year to fit her with a prosthetic eye and attend to her scars.

Fluent in the Afghan languages of Pashto and Dari, she's also picked up a good deal of English since arriving in the U.S. late last year. Also an affinity for American culture. Decked out in a pretty dress and a pair of Minnie Mouse shoes, she sometimes sang along to the song "Let it Go" from the Disney film "Frozen" as she painted.

Afterward she was a bit quiet but still all smiles as she wandered the gallery with an iPhone, snapping pictures of the paintings, the sculptures and the people. And also a few selfies to take back home.

But before heading home to her host family and then Afghanistan there was still some unfinished business.

As the afternoon grew longer and the gallery crowd thinned, Whaley asked if she might like to do another painting.

"Yes!" came the exuberant reply. And the pair got back to work.