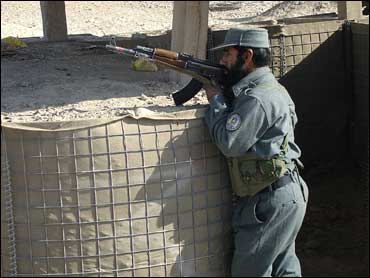 Hundreds of Taliban fighters retreated in trucks and motorbikes Monday from a southern Afghan town they overran last February - the only important territory the militants controlled - as Afghan and international troops closed in on the town's center.

Visiting British Prime Minister Gordon Brown said the victory in Musa Qala will have positive long-term results for the Afghan campaign. It also gives NATO a symbolic triumph in the deadliest year of fighting in Afghanistan since 2001 and boosts hopes the Afghan government can expand into a poppy rich area where it now wields little influence.

But Musa Qala has bounced back and forth between government and Taliban control, falling into militant hands in February despite the presence of British troops nearby, and the question remained whether overstretched Afghan and NATO troops can hold the town in the long-term.

Some 7,000 British troops have faced fierce battles throughout northern Helmand this year - in Kajaki, Sangin, Gereshk and Musa Qala - the world's largest opium poppy growing region, from which the Taliban derive tens of millions of dollars.

CBS News' Fazul Rahim, reporting from Kabul, said winning back Musa Qala was a highly symbolic blow to the country's Islamic militants. "It was the only big town where the Taliban had put in place their own way of government and courts," said Rahim, adding that the extremists had even set up their own radio station in the town, broadcasting Taliban leadership messages and Jihadi songs.

President Hamid Karzai said the decision to enter Musa Qala followed reports of brutality there by the Taliban, al Qaeda and foreign fighters. But Karzai also said local Taliban commanders had committed to switch their allegiance to the Afghan government.

Azimi told Rahim that "several dozen" militants had been killed fighting for the town, including some "foreigners", an likely reference to Taliban from across the border in Pakistan, or al Qaeda militants from other countries. Azimi said a more exact death toll would only be possible once the town had been secured.

NATO's International Security Assistance Force said ISAF and Afghan troops had entered the outskirts of the main part of Musa Qala but would now proceed cautiously into the town center because of improvised explosive devices.

An Afghan army commander, Brig. Gen. Gul Agha Naebi, said Musa Qala was surrounded and that troops were 500 yards from the town center.

"The bombing continues. The area is big. (Tuesday) we will carefully clear the streets from the mines," he said. "Both sides are still exchanging fire. There is still resistance from the Taliban. I think these are foreign fighters, al Qaeda members that we are facing. They are trying to create ways for retreat."

"I was standing on my roof and saw hundreds of Afghan soldiers drive into town," Rauf said. "All the shops are closed and families are staying inside their homes."

Speaking at a news conference in the capital alongside Brown, Karzai recalled a story of a 15 year-old boy accused of spying that Taliban militants hanged from a ceiling. The militants lit two gas cylinders on fire underneath him, roasting the teenager to death. The next morning the militants told the boy's mother she could pick up her son.

"When she entered the room she found the charcoaled dead body of her son," Karzai said. "Some of the Afghan Taliban who also witnessed atrocities like that, they came and they met with me and they asked me to intervene and (said) that they will switch sides and that is what's happened," Karzai said

Taliban militants overran Musa Qala in February, four months after British troops left the town following a contentious peace agreement that gave security responsibilities to Afghan elders. That deal was criticized by U.S. officials behind the scenes as surrendering to the Taliban.

NATO commanders had long said they would take back Musa Qala at a time of the Afghan government's choosing, but NATO and Afghan forces will now have to work to hold the town in a region - Helmand province - that has seen the fiercest fighting in Afghanistan this year.

Lt. Col. Richard Eaton, a British military spokesman, said the military wasn't going to take Musa Qala without a plant to hold it. He said a unit of predominantly Afghan soldiers would be stationed in town.

(AP Photo/Stefan Rousseau/Pool)
Brown, seen at left visiting British troops in Helmand province, said he had "no doubt" the Musa Qala operation would be successful and that social and economic progress would follow military action.

"In Musa Qala the action has been taken, and I think we will see in the next few days in Musa Qala that the action will be effective, that it will work and it will bring long-term and lasting results," Brown said.

During a stop at Camp Bastion in Helmand province, Brown thanked about 150 British troops for their "patriotic service."

Brown's visit to Iraq on Sunday signaled the start of what Britain hopes will be the transition from a military mission there to one aimed at aiding Iraq's economy and providing jobs. His speech was met with enthusiastic applause and cheers by British troops stationed there.

His speech in southern Afghanistan, by contrast, was more subdued, as was the resulting applause, perhaps reflecting the serious fight that British soldiers find themselves in.

"We have an operation ongoing in Musa Qala, we've just had people die, so it's a different tempo," said Lt. Andy McLachlan, from Exeter in southwest England.

At least 40 British soldiers have been killed in Afghanistan this year and 86 have died in the country since 2001.

This year has been the deadliest since the U.S.-led invasion in 2001. More than 6,200 people have been killed in insurgency-related violence, according to an AP tally of figures from Western and Afghan officials.