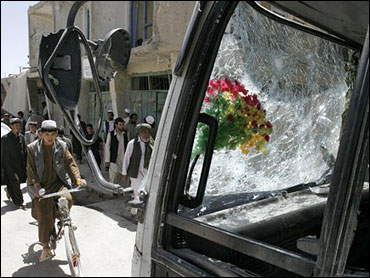 The coalition said the joint forces were attacked while on a patrol in the Sangin district of Helmand province on Sunday. An estimated 50 Taliban reinforcement fighters came by foot and boat along the Helmand River from surrounding areas, the coalition said in a statement.

Coalition airstrikes bombed seven compounds, resulting in three secondary explosions from suspected weapons caches, it said. It said there were "several" confirmed militant deaths during the 14-hour battle and no reports of civilian injuries.

The Afghan Defense Ministry said the clash and airstrikes in Sangin killed 25 suspected Taliban, including a group leader identified as Mullah Younus.

NATO is pushing ahead with Operation Achilles, its largest ever operation involving some 4,500 NATO troops and 1,000 Afghan soldiers. Achilles is centered in northern Helmand province, the country's opium heartland and a Taliban stronghold.

Meanwhile, a British soldier died Sunday of wounds from an accident at a British military base in Sangin, the British Ministry of Defense said.

On Sunday, a suicide bomber walked into a crowded market in the eastern city of Gardez and blew himself up, killing 14 people and wounding 31, officials and witnesses said.

The attack damaged around 30 shops, shattering windows and destroying the stores closest to the explosion.

Witnesses said a convoy of foreign troops appeared to be the target of the Gardez bomber, but that it already had passed when the bomber struck.

Maj. William Mitchell, a spokesman for NATO's International Security Assistance Force, said there were initial reports of injuries to ISAF soldiers, though he didn't have further details.

Six people died at the scene of the blast, police said. Another eight later died in hospital, said Ghulam Hazrat Majedi, the doctor in charge of the Gardez hospital. He said two of the 31 wounded were in critical condition.

Nasar Ahmad, a 30-year-old shopkeeper whose three cousins were seriously hurt in the blast, said he saw a U.S. convoy driving through the city just before the explosion.

Shah Mohammad, 19, said all those killed or wounded by the blast were Afghan civilians.

Violence in Afghanistan has increased sharply in the last several weeks. More than 1,600 people, have been killed in insurgency-related violence this year, according to an Associated Press count based on U.S., NATO and Afghan officials. The dead have mostly been militants, but about 300 civilians also have died in the violence.