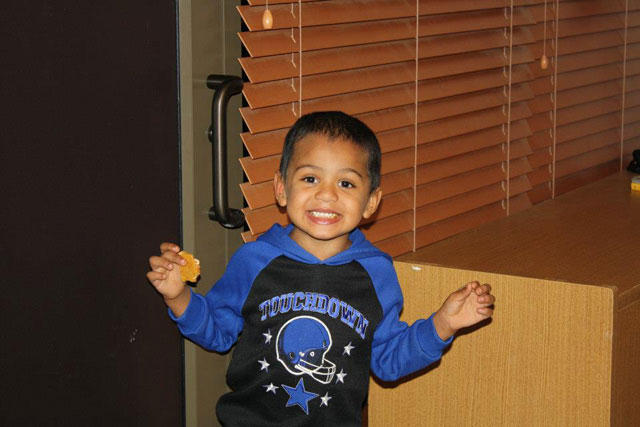 KANSAS CITY, Mo. -- A slain Kansas boy, whose remains were fed to pigs, died after escalating abuse ended with him being beaten for "stealing food" and locked naked in a shower stall for months as a closed-circuit surveillance camera recorded his deteriorating condition, according to affidavits and search warrants released Monday.

The remains of 7-year-old Adrian Jones were found in November 2015 on the family's Kansas City, Kansas, rental property after officers responded to a report of domestic abuse. The boy's stepmother, Heather Jones, said the child's father, Michael Jones, had beaten and choked her after she threatened to leave him and had fired a gun at her twice as she ran from the home. Heather Jones, worried because Michael Jones had left with six children, told authorities that Adrian had died and been fed to swine weeks earlier, according to the records.

The documents, full of graphic and disturbing details, were released after Michael Jones was sentenced earlier this month to life in prison with no chance of parole for at least 25 years. An identical sentence was ordered for Heather Jones in November.

According to the records, Heather Jones told authorities that Adrian was physically abused before coming to live with the couple and had been diagnosed with post-traumatic stress disorder with severe emotional detachment. She described him as being "a psychopath, like a serial killer." She said Adrian once attempted to stab her in the abdomen when she was pregnant and that he had been a patient at several residential treatment facilities. An uncle told authorities that the child had been diagnosed with schizophrenia.

The Joneses used increasingly severe methods to control Adrian, including strapping him first to a crib mattress and then an inversion table, handcuffing him, restraining him with splints and ace bandages, shocking him with a device called a Zap Enforcer and sticking him in a suitcase with only his head sticking out, according to court records.

Heather Jones told authorities that Michael Jones would also punch Adrian and that the boy spent his final months confined to a shower stall, where a piece of plywood was used to keep him from escaping. Photos and videos show the boy suffered from "extreme starvation," according to the records.

Michael Jones said that after finding the boy dead, the body was kept in the house for up to two weeks before the pigs were purchased from a person who was told the animals were to be used for a home-schooling project. Michael Jones told investigators that the pigs ate most of the child's body and that the remaining bones were stored in a tub. Michael Jones explained the boy's disappearance by saying he was in a mental facility.

One child told investigators they recalled hearing Adrian yelling "I'm going to die" through a vent and Heather Jones telling him to "suck it up" when he said he couldn't walk because his feet were swollen.

Asked why she hated Adrian, Heather Jones told authorities that the boy had lied to welfare investigators, resulting in her biological son being taken away from her. Heather Jones talked about struggles with the boy in a private Facebook group, saying "pain compliance does not work" and that he "has to be restrained 95% of the time." One person who responded appeared to think she was exaggerating, writing "god bless u for taking him in!!!"

Welfare officials in Kansas and Missouri had involvement with the family. Records released earlier this month show that Adrian Jones was 5 years old in July 2013 when he told a Missouri Children's Division worker and police officer that a "little bone come out" when his father kicked him in the head.

The Kansas City Star reports that the Missouri Children's Division worker and police officer spoke with Adrian after an anonymous tipster called a hotline to report abuse at his home. Adrian said that "daddy kicks me," the records show. The boy added that his dad "keeps hitting me in the head and punches me in the stomach and mom keeps pulling on my ears and it really hurts."

The Joneses "always lock me in my room. I have to sleep without a pillow and blanket," the records quote Adrian as saying. He added that his stepmother "keeps being mean to me."

According to the Kansas City Star, the Missouri Children's Division found "by a preponderance of the evidence" that Adrian had been neglected in July of 2013. But investigators and medical staff reportedly didn't see signs of physical abuse on the child, and he wasn't removed from the home.

Missouri welfare officials said then that they didn't think they could ensure Adrian's safety at home, but that a county juvenile officer suggested the family be provided more services, according to records. The family then moved to Kansas, where welfare officials were reportedly notified by Missouri about the family.

Similar records remain under seal in Kansas, where welfare officials have said allegations against the family were "thoroughly investigated."

Lori Ross, a Missouri child advicate, told the Star this month that Adrian should have been removed from the home by Missouri authorities after he reported the abuse in 2013.

"I don't understand why, after what he initially said, there wasn't an immediate request to pick him up," Ross, founder, president and CEO of FosterAdopt Connect, told the paper. "He was very detailed, saying in his 5-year-old voice he was being dramatically abused."