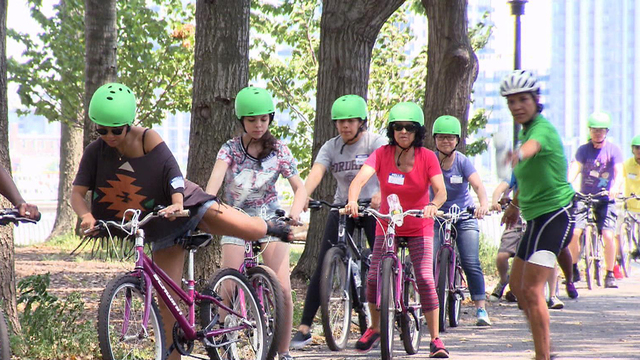 The number of people riding bikes to work has gone up more than 60 percent in the past decade. But that's not an option for some adults who are taking classes to help them learn how to ride, reports CBS News correspondent Mireya Villarreal.

On a recent afternoon in New York City, more than 20 adults gathered to participate in what's traditionally seen as a childhood rite of passage.

"This was a goal for my 12th birthday and we just waited a little longer," Amani Mohsen said.

The 33-year-old was looking to experience that freedom only a bike can provide so she traveled from New Jersey to the Manhattan's Lower East Side to take a free adult biking class.

"When I walked into the registration, it was very refreshing to see adults," Mohsen said. "It wasn't 12-year-old kids learning how to ride a bike, it was people just like me."

According to YouGov, a global research firm, about 13 percent of adults in the U.S. between the ages of 18 and 34 don't know how to ride a bike.

Irasema Rivera is an instructor for Bike New York, a non-profit organization dedicated to teaching adults and kids how to ride.

"The fact that we have new bike paths in New York, I think has also kind of spurred that more people are wanted to learn how to ride because of that," Rivera said.

Across the country more cities are making their streets bike friendly. An 8-mile trail is being built around downtown Indianapolis; in Louisville, Kentucky, workers are breaking ground on a 100-mile network of paths through their neighborhoods; and more than 70 major cities now have bike sharing programs or preparing to launch soon.

"Government officials have realized cycling is kind of an indicator species," Bicycling Magazine editor-in-chief Bill Strickland said. "If there is cycling in a city, it is in general a vibrant, young population."

So groups in the U.S. are now offering adult riding classes. At Bike New York, students start with the basics.

"We really emphasize bike safety, helmet, how to fit one appropriately," Rivera said.

The pedals are initially removed from their bikes; but once they show instructors that they can glide and balance, they get them back. And that's when the real fun begins.

"We can be as a group at the beginning but then when we really get them on the bike it's kind of a one-by-one. I call it popcorn kernels," Rivera said. "They start popping one by one, then it gets more individual."

Mohsen took a little longer than some of the other students in her class.

When she's on the bike, she said she's praying to be successful.

"I'm telling myself 'You should be proud that you're even here.' I'm just trying to look up and think of only positives thoughts," she said.

But once she got the hang of things, it was an emotional ride.

"It's just, it's something I want to do, that's all. It's happy tears. It's something I really want to do. It's not part of the story at all," Mohsen said. "My dad tried to teach me. He's not alive. Like it would be really cool to do it and know that I'm just kind of moving forward."

Mohsen is planning to go back to another class, which is not uncommon. A lot of adults will take the first class for the basics and go back again for confidence.