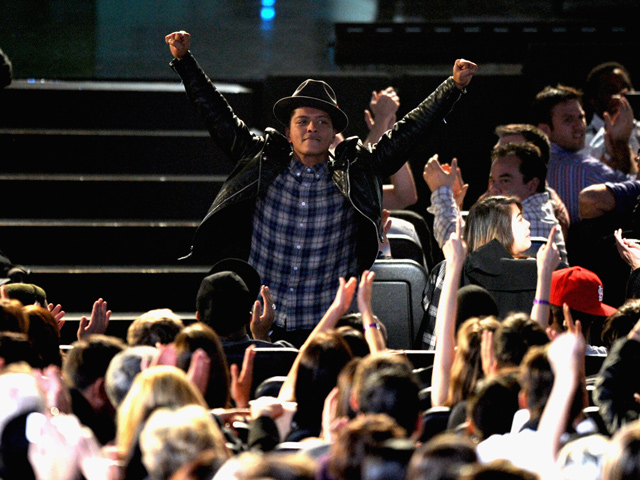 Nominations for the 54th Annual Grammy Awards got underway Wednesday night at the Nokia Theater in Los Angeles with a one-hour concert event that aired on CBS.

Lady Gaga got the countdown to music's biggest night started with her single "Marry the Night."

Adele scored six Grammy nominations, including for record, song and album of the year, but the owner of the 2011's best-selling album with "21" wasn't the night's top nominee - and that wasn't the evening's only surprise.

Kanye West came away with a leading seven nominations, including a bid for song of the year for his all-star song "All of the Lights." However, the album from which it came - "My Beautiful Dark Twisted Fantasy," heralded by many critics as the best album of 2010 - was shut out of the best album category, and all of his other nominations were relegated to the rap fields.

Even though Adele didn't get the lion's share of nominations, she got them where it counted: Her "21," the mournful post-breakup album that produced smash hits like the torch ballad "Someone Like You" - was nominated for album of the year. The searing groove "Rolling in the Deep," which spent seven weeks at No. 1 this past summer, got nominations for both record and song of the year. Only Mars got nominations in all three categories as well.

Nicki Minaj announced the nominees for record of the year: Adele's "Rolling in the Deep," Bon Iver's "Holocene," Bruno Mars' "Grenade," Mumford and Sons' "The Cave" and Katy Perry's "Firework."

The song of the year nominees include "All of the Lights" by Kanye West, Rihanna, Fergie and Kid Cudi, Mumford & Sons' "The Cave," Bruno Mars' "Grenade," Bon Iver's "Holocene" and Adele's "Rolling in the Deep."

Album of the year nominees are "21" by Adele, "Wasting Light" by Foo Fighters, "Born This Way" by Lady Gaga, "Doo- Wops & Hooligans" by Bruno Mars and "Loud" by Rihanna.

Other performers at the Grammy nomination event included Rihanna, Jason Aldean, along with The Band Perry, who did a medley of their hits, which included a cover of "Free Fallin'" by Tom Petty.

This year's nominations will mark the newly trimmed Grammys. Earlier this year, amid some protests, the academy cut the number of categories from 109 to 78. Some of the more niche categories, like best Zydeco or Cajun music album, were eliminated. In addition, men and women will now compete together in vocal categories for pop, R&B and country, instead of having separate categories for each sex.

Even with the reductions, there is an avalanche of categories, as noted by Neil Portnow, the Academy's CEO and president.

"We've got 78 categories now. It would certainly be impossible to do all of them on any of our shows," he said Tuesday.

Tell us: Do you think anyone got snubbed this year?