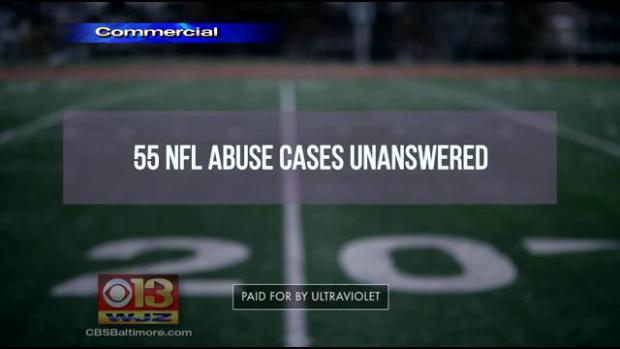 A controversial ad is set for airing during the Sunday broadcast of Super Bowl XLIX that not only focuses on what they say are the NFL's failures to properly address domestic violence, but also calls for the resignation of commissioner Roger Goodell.

The 16-second spot, purchased by women's rights organization Ultraviolet, depicts a football player tackling a woman on a football field, then says: "Let's take domestic violence out of football."

Ultraviolet says that Goodell ignored 55 incidents of domestic violence involving NFL players and has taken its insistence that the commissioner resign much farther than the hashtag #GOODELLMUSTGO. During the AFC Championship at Gillette Stadium in Foxborough, Mass., and the NFC Championship at CenturyLink Field in Seattle, the group flew banners over both stadiums with the hashtag on them.

The ad slated for the Superbowl is a continuation of Ultraviolet's campaign to create awareness of domestic violence in the league.

"With over 100 million people around the world watching, now is the perfect time to draw attention to the NFL's problem with domestic violence," Adam Bink, UltraViolet's campaign director told CBS Baltimore.

The NFL will release its own domestic violence ad during the Super Bowl broadcast and has issued a new policy toward the issue with more harsh penalties for violators. But the group still believe Goodell should resign, particularly after the Ray Rice incident last year, where the former Baltimore Ravens running back was recorded abusing his then-fiancee, now wife, Janay in an Atlantic City hotel elevator.

"We still need to draw attention to the fact that Commissioner Goodell ignored over 55 cases of domestic violence during his tenure and now it's time for him to step down," Bink said.