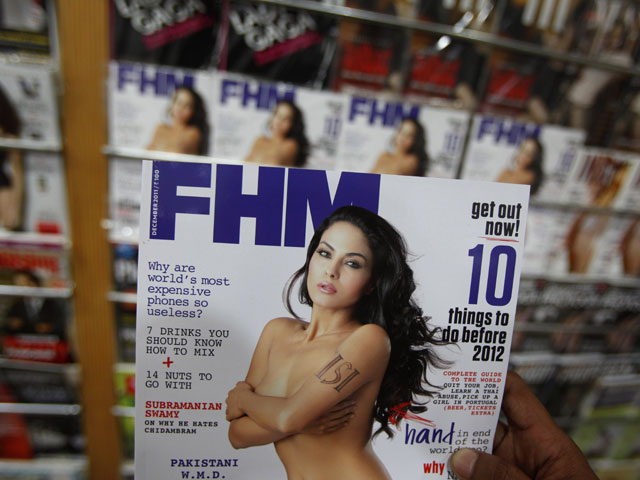 NEW DELHI - Popular Pakistani actress Veena Malik is suing FHM India, the Indian version of the popular men's magazine, for $2 million for altering photos of her to make her appear naked, according to her lawyers. Malik wants all issues to be removed from newsstands as well.

Malik appeared completely naked -- though covering her crotch and breasts -- on the cover of the magazine's December issue. Her lawyer, Ayaz Bilawala, said that Malik was wearing underwear throughout the photo shoot. He claimed that in the photos that were shown to the actress for approval, she was wearing clothing.

"Ms. Malik has been cheated and duped. She had a photoshoot, but there was no nudity. She had some clothes on," Mr Bilawala told the BBC.

A mock tattoo appearing on Malik's arm both on the cover and in additional photos inside the magazine. The tatoo, reads "ISI", a reference to Pakistan's intelligence agency, Inter-Services Intelligence. Her lawyer told the Wall Street Journal she was aware of the tattoo.

The photos mock the military rivalry between India and Pakistan. According to the Wall Street Journal, Malik told Pakistani media the ISI reference was supposed to make fun of Indians who see the ISI as the root of all bad things in their country. In another photo, she is wearing a tiny ammunition belt and has a grenade pin in her teeth. She is partially blocked by a military helmet in another picture.

FHM India editor Kabeer Sharma claims Malik was nude throughout the photo shoot, and the magazine has video proof. He said that he had showed it to the actress' lawyers, but FHM India would not release it publicly "because of the nature of the video."

The pictures have caused an uproar, especially in the conservative Pakistani community. A Muslim cleric, Abdul Qawi, told Aaj TV that the photographs were a "shame for all Muslims." He had previously criticized the actress' behavior during her stint on "Bigg Boss 4," the Indian version of "Big Brother." Malik lashed out at the criticisms, saying Qawi was only deriding her because she was a woman.

Malik has also said that Muslim women should be able to wear what they believe is appropriate, and has tried to bring awareness to "honor killings," which target women. "If a woman is cool with wearing a burka, she should wear a burka. If a woman, being a Muslim, wants to wear jeans, then she should wear jeans. That's your right," she said to The Australian.