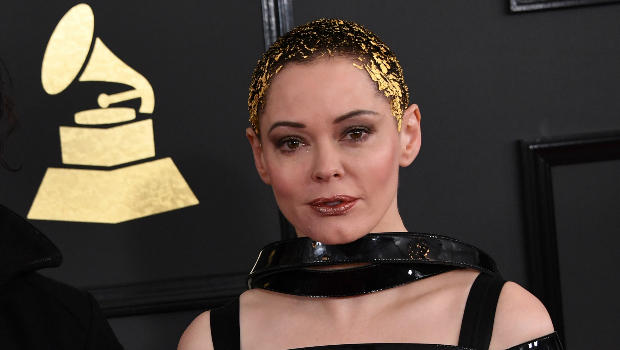 NEW YORK -- After a suspension earlier in the day from Twitter, actress Rose McGowan forcefully re-emerged Thursday, stating more frankly what she has long suggested: "HW raped me."

McGowan last year said that she had been raped by a "studio head." The New Yorker exposé that ran Tuesday reported that Weinstein had allegedly sexually assaulted three women, though the third woman was unnamed. The New York Times earlier reported that Weinstein paid a financial settlement of $100,000 to McGowan in 1997 over an incident in a hotel room at the Sundance Film Festival in Utah.

The Summit County Sheriff's Office, which shares a records system with Park City Police, had no reports or calls involving Weinstein or McGowan in the past 30 years, sheriff's spokesman Lt. Andrew Wright said.

The Times reported Weinstein's settlement with McGowan included provisions about speaking about the case in the future.

But McGowan appeared emboldened Thursday to describe more outright her past experience with Weinstein. Shortly before a series a tweets addressed to Amazon chief Jeff Bezos, McGowan tweeted a woman warrior picture with a "Rosearmy" hashtag and stated "It's on."

"I told the head of your studio that HW raped me," said McGowan in tweets directed to Bezos. "Over and Over I said it. He said it hadn't been proven. I said I was the proof."

In subsequent tweets, McGowan appeared to suggest that Amazon Studios, which is overseen by Roy Price, previously dropped a project penned by McGowan after she insisted Weinstein not be involved.

Meanwhile, Amazon said in a statement Thursday night that Price is on a leave of absence, effectively immediately, following allegations of sexual harassment from a producer on the series "The Man In the High Castle."

McGowan went on to urge Bezos "to stop funding rapists" and told him "be the change you want to see in the world."

The 44-year-old McGowan has emerged as one of the most vocal in Hollywood about sexual abuse and harassment in the industry. She has pushed for the remaining board members of The Weinstein Co. to resign in the wake of the allegations against Weinstein. She also this week called Ben Affleck "a liar" on Twitter, suggesting the actor knew about Weinstein's conduct. (She and Affleck co-starred in 1997 "Going All the Way" and 1998's "Phantoms.")

Representatives for Affleck did not respond to messages regarding that allegation.

Considering McGowan's stature as a central figure in the Weinstein saga, Twitter sparked an outcry across social media when it temporarily suspended McGowan from its service. The ban was lifted Thursday afternoon but not before a storm of criticism from Jessica Chastain, Anthony Bourdain and many others.

Twitter said Thursday that it suspended McGowan's account because she tweeted a private phone number, a practice it said violated its service terms. The company said it will "be clearer about these policies and decisions in the future."

Meanwhile, New York Police Department spokesman Peter Donald said Thursday that investigators are trying to determine whether there were any additional complaints involving Weinstein. That includes reviewing police files to see if any women previously reported being assaulted or harassed by him.

So far, no filed complaints have been found, he said, other than one well-known case that prompted an investigation in 2015, but authorities are encouraging anyone with information on Weinstein to contact the department.

BBC News reports police are also looking into a sexual assault allegation in the U.K.

Weinstein, through a spokeswoman, has denied any nonconsensual sexual conduct with any women. He said Wednesday in Los Angeles that he's hoping for a second chance and needs to "get help."

A former assistant of Weinstein's, who did not want to be identified and asked us to alter his voice, told CBS News' Bianna Golodryga he feels he and others who worked for Weinstein were victims in a way, as well.

"It was no secret that he had scores of women all across the globe," he said.

The former assistant says it was well known that his boss was a philanderer. But he says Weinstein went to great lengths to keep his most private moments secret.