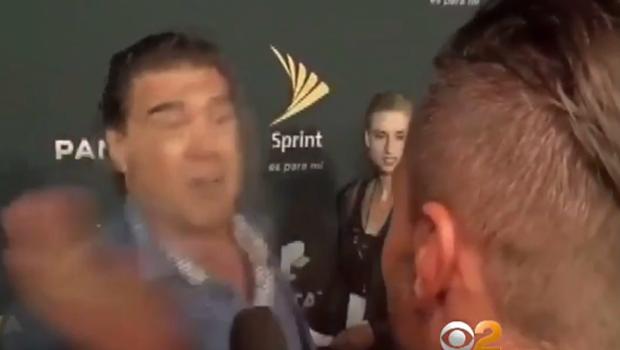 LOS ANGELES -- A Mexican soap star slapped a reporter on the red carpet when the actor took umbrage to a question about his son.

CBS Los Angeles spoke to another entertainment reporter who was on the red carpet, who said the actor -- telenovela star Eduardo Yanez -- has a reputation for often being angry with reporters.

He and the reporter -- Paco Fuentes -- were quipping and joking moments before the slap. The actor seemed to turn on a dime.

The slap happened in Hollywood on Tuesday evening.

The reporter asked the actor why the actor's son had set up a GoFundMe page to pay for a car he had crashed instead of asking his dad for the money.

That question clearly set the actor off.

He said, in Spanish, "If you're so worried about my son, you send him the money or go talk to him."

Fuentes replied that the people, the audience cared, and he was just the messenger.

Yanez told him that that was a lie -- he was the one trying to make a big deal out of it. Yanez accused Fuentes of being disrespectful.

Fuente said he wasn't trying to be disrespectful -- and Yanez slapped him hard. The slap is going viral.

Lupita Herrera was on the red carpet.

She said she spoke to Yanez immediately before Fuentes and she asked the same question about his son.

Herrera says he got angry with her question as well, but couldn't believe he slapped Fuentes.

"In my opinion," she said, "Fuentes was just doing his job. And Eduardo needs anger management."

CBS Los Angeles reached out for a comment from Yanez and Fuentes and has not heard back at press time.

It was also unknown if any charges were filed or are pending.