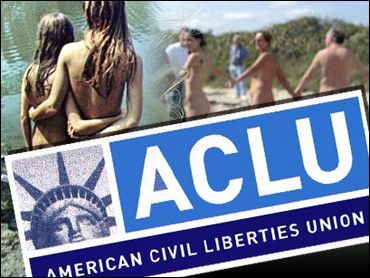 A lawsuit is challenging a new state law that effectively bans nude summer camps for teenagers, saying it violates the constitutional right to privacy.

The American Civil Liberties Union sued Tuesday in federal court to keep the state from shutting down a no-clothing camp for juveniles in late July at the White Tail Park nudist camp in Ivor.

The law was passed in March in response to a weeklong residential camp for 11- to 18-year-olds last June at White Tail. It was the first in Virginia and only the third such au naturel camp for juveniles in the nation, according to the American Association of Nude Recreation.

"Legislators overreacted and in the process they substantially interfered with the right of families to make lifestyle choices," Virginia ACLU executive director Kent Willis said. "Using the overall logic of this law, legislators are now free to prevent children from swimming, playing baseball or riding a bus."

The law, which takes effect Thursday, denies a state license to "any hotel, summer camp or campground ... that maintains, or conducts as any part of its activities, a nudist camp for juveniles." It defines the camps as those attended by "openly nude juveniles" not accompanied by parents or legal guardians.

"We believe the law as passed is constitutional, and we look forward to defending minors and morals in the commonwealth," said Tucker Martin, a Kilgore spokesman.

White Tail opened in southeastern Virginia in 1984. About 1,200 nudists are there at any one time, including about 30 families who live there all year. Visitors undergo background checks, and the camp has strict rules against lewd, lustful or lascivious conduct.

Similar youth camps have been held in Florida and Arizona, according to the American Association of Nude Recreation, with which White Tail is affiliated.

Besides White Tail, plaintiffs include three couples who are White Tail members and their children: three boys, ages 11, 15 and 17, and two girls, 10 and 12.

"So for these kids, being around other naked kids is something perfectly normal, and the camp is very highly supervised," she said.