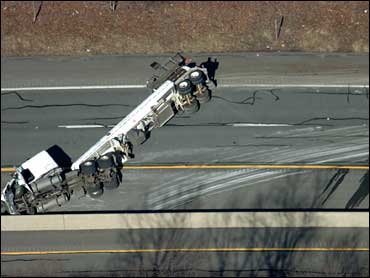 A tractor-trailer carrying a dangerous acid overturned on a highway Saturday, prompting authorities to order thousands of residents to leave town for almost nine hours.

The tanker, carrying 33,000 pounds of corrosive hydrofluoric acid, a component for household detergents, flipped over at about 3 a.m. on the edge of Wind Gap, about 60 miles north of Philadelphia.

At 7 a.m., officials ordered an evacuation of 944 households. They said about 5,000 people were in the affected area.

Northampton County spokesman John Conklin said the truck driver was treated at a hospital and was released. One of about 200 people at an evacuation center at a local high school was taken to a hospital for a condition unrelated to the hazardous-materials incident.

Emergency crews reported liquid dripping from the tanker's valves or piping, forcing them to return in full protection suits to stop the drip. The tanker truck was righted at about 3:10 p.m., and the evacuation order was lifted soon after, although the road remained closed in both directions.

Hydrofluoric acid, even in low doses, can irritate the eyes, nose and respiratory tract, the Centers for Disease Control and Prevention said. In higher doses, exposure can cause severe burns, chronic lung disease or even death, the CDC says.

Conklin said animals in the affected area, including horses from several farms, were relocated.