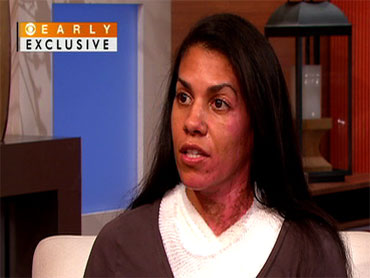 For the second time in just one week, a woman was attacked by an acid-wielding stranger. Even though acid attacks rarely occur in the United States, the scars they cause can take a lifetime to heal.

CBS News National Correspondent Jeff Glor reported on "The Early Show" that Derri Velarde had just arrived home when she was viscously attacked with acid -- a scenario that bears an eerie resemblance to another attack that happened in another city, over a thousand miles away.

Six days ago, Velarde was getting out of her car near her home in Mesa, Ariz., when a woman approached her with what she thought was a cup of water.

Velarde said, "She just stopped abruptly and looked at me and threw it in my face."

But it turned out to be a powerful acid that left the 41-year-old mother of five with severe burns on her face, neck, arms and back. The violent attack is alarmingly similar to an incident in Vancouver, Wash., just a few days earlier.

In an exclusive interview -- her first since the incident -- Velarde said on "The Early Show" the attack wasn't random.

"It was definitely planned for me," she said. "You know, it was premeditated, if you can use that word. But then again, no, I can't -- there's nothing that I I've done or that I can think I've done that would anger somebody to this extent. I mean, I can't imagine doing anything to anger somebody to that extent. I was telling people, don't even have road rage. I'm the person that lets people in. I don't understand it. I don't know. I have no idea who could be."

Velarde said she doesn't know the woman, but said she looks familiar.

"I'd never seen her before. And I don't know her. But I was telling the detectives, there was a slight familiarity, maybe I had seen her aren't the complex or -- or maybe she just looked like somebody I know."

Velarde says her attacker had an evil look in her eyes.

Velarde said, "Yes. But she didn't actually speak at all but she was saying it with her face. Yeah. I mean, eyes is really what I saw and remember."

When asked if she would like to say anything to her attacker, Velarde responded, "I'm the kind of person that I'm not going to -- I'm just not going to waste any more of my time thinking about her or -- she's just not a thought if my mind."

Velarde's attacker is still at large.

As for her acid burns, Velarde said doctors are still evaluating her case.

"It's really tough because I guess with burns they change so much," she explained. "... It's mostly second-degree. They believe some of the spots on my back are third degree. They're watching to see how deep they actually went. It looks a little deeper in some spots. And they haven't said anything yet about surgery or, you know, things like that, or plastic surgery or my recovery. I just found out the other day that I'll have to wear burn garments, which I don't know that much about it but I heard them mention it to me when I was checking out that I'll come back and get fitted."

But as Hill pointed out, Velarde's quick thinking to jump into the shower may have saved her from more severe injury.

Velarde replied, "It was a natural instinct. The first thing I did was when I -- it was on my eyelid. At the time, I couldn't tell, the pain was so intense. I couldn't tell if it was my eye burning. My kitchen sink was right when I walked in so the first thing I did was flushing my face because I was afraid I was going to lose my eye. When I was flushing my face, I felt the burning on my clothes and we ripped them off and they were like, you need to get in the shower. So I think the water, you know, definitely helped dilute it significantly."

But Velarde said just seconds after she was soaked with the substance, she knew something was very wrong.

Bethany Storro, 28, who was attacked last Monday experienced a similar feeling when she was doused by her attacker -- also female -- on her way to a coffee shop.

Storro said, "It was the most painful thing ever. My heart stopped, I almost passed out."

Glor pointed out acid attacks are most often found in the Arab world. In the west, they are rare, but not unheard of in 2008, British model Katie Piper was assaulted by a stranger in London. It was caught-on-tape by surveillance cameras. Piper suffered severe burns and was blinded in one eye.

In the British Broadcasting Corporation (BBC) documentary, "My Beautiful Face," Piper explained, "It was eating across my face and it was some like contagious disease eating me up."

In both recent incidents, Velarde and Storro did not know their attackers, but Velarde, who is going through a divorce and recently started a new relationship says she can only speculate about a motive.

Velarde told CBS News, "She wanted to make sure she disfigured me so that no one would want me."

Criminal profiler Pat Brown says of Velarde's attack, "It is a copycat crime. The person who committed the second saw an opportunity, a good way to hurt somebody, and they decided also perhaps that this would be considered a second random attack and therefore the finger wouldn't point back at them."

At this time, Storro and Velarde have been released from the hospital, but police working on both cases have yet to make an arrest.

Velarde has no health insurance. She told Hill she's doesn't know what she's going to do next. She said she's "literally working every day to make ends meet."

But Velarde has a positive view about the attack.

For more information on how you can help Valerde, go to her website here.