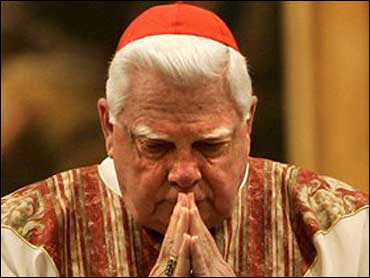 Cardinal Bernard Law, the former archbishop of Boston who stepped down amid a sex abuse scandal, presided at Mass Sunday in Rome's St. Mary Major Basilica, the church where John Paul appointed him archpriest.

On Monday, Law will lead one of the nine daily Masses for the pope at St. Peter's Basilica.

Paul Steidler, who tells CBS News Correspondent Randall Pinkston he was abused by a priest for two years, blames church leaders like Law, who he calls "the poster child for covering up sexual abuse crimes against children."

Law resigned as archbishop of Boston in December 2002 after unsealed court records revealed he had allowed priests guilty of abusing children to move among parish assignments and had not notified the public.

But the pope brought him to Rome and gave him his assignment. That was too much for Steidler.

"Forgiveness is wonderful," Steidler says. "It's great, I mean, I forgive my abuser, I forgive the bishop who covered up for them but that does not mean you allow them to be in a positions of authority."

Leaders of the advocacy group the Survivors Network of those Abused by Priests said they were flying to Rome to protest, calling Law's presence painful to clergy sexual abuse victims and embarrassing to Catholics. Survivors Network representatives plan to distribute fliers on how Law mishandled abuse cases.

"We certainly do not want to cause any additional pain or suffering to anyone attending the memorial service for the Holy Father," Barbara Blaine, the group's founder, said in a phone interview from the United States. "Our concern is that many Catholics going there don't know the history with Cardinal Law and that's why we want to inform them."

New York Cardinal Edward Egan celebrated Mass at the Basilica of Saints John and Paul, where he had been consecrated as a bishop, but declined to comment afterward, citing the cardinals' agreement on Saturday to stop speaking to the media until a new pope is chosen.

Law has apologized for his wrongdoing. A man who answered the phone at the basilica said Law would not comment. A spokeswoman for the U.S. Conference of Catholic Bishops also declined to comment.

Some in the Catholic Church have said the Vatican likely asked Law to preside over the service because he leads an important church, not to give him a personal honor. The church is one of four basilicas under direct Vatican jurisdiction.

Still, the assignment gives Law a position of influence. In their homilies, cardinals usually indicate what they consider the key concerns for the church. Observers scour the speeches for clues to how a cardinal will vote.

Some Catholics in Boston protested and said it was a sign that Vatican officials did not understand the betrayal parishioners felt that predators were not kept away from children.

The abuse crisis erupted in January 2002 with the case of one accused priest in the Archdiocese of Boston and spread throughout the United States and beyond. Hundreds of accused clergy have been removed from parish work in America over the last three years and the U.S. church says it has paid at least $840 million for settlements with victims since 1950.