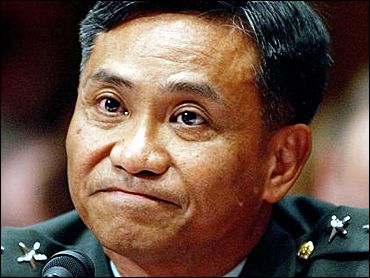 The U.S. Army general who investigated prisoner abuse in Iraq disagreed sharply Tuesday with a top Pentagon civilian about who was in charge of the Abu Ghraib complex where the mistreatment occurred. In a daylong hearing jolted by news of the beheading of an American in Iraq, the two also differed on the key issue of responsibility by higher-ups.

Maj. Gen. Antonio Taguba told the Senate Armed Services Committee that military police who acted improperly did so "of their own volition."

"A few soldiers and civilians conspired to abuse and conduct egregious acts of violence against detainees and other civilians outside the bounds of international laws and the Geneva Convention," he said.

Several senators, however, questioned whether those low-ranking soldiers would have created the sexually humiliating scenarios by themselves.

Indeed, the committee's chairman, John Warner, said it was his understanding that some of the photos, such as one showing an Iraqi prisoner with women's underwear covering his head, were to be shown to prisoners' families "by way of threat unless he came forward with some valuable information."

Taguba said that when control of the prison was turned over to military intelligence officials, they had authority over the military police who were guarding prisoners.

But Stephen Cambone, the Pentagon's undersecretary for intelligence, said that was incorrect, that authority for the handling of detainees had remained with the MPs.

That difference underscored the confusion that surrounds the abuse controversy as military investigators attempt to determine if blame should be assigned to more than the 13 soldiers now reprimanded or charged with criminal violations.

It also highlighted an unresolved question linked to Maj. Gen. Geoffrey Miller, who visited Iraqi prisons in early September, shortly before the reported abuses took place. The question is what Miller meant when he recommended, at the time, that military police become actively involved in "setting the conditions" for successful prisoner interrogations.

Some of the seven MPs who have been charged with abusing Iraqi prisoners at Abu Ghraib have said they believed they were acting on orders from military intelligence personnel who wanted prisoners "softened up" to make them more compliant in interrogations.

Cambone told the committee that Miller meant the MPs should be "collaborating" with the military intelligence soldiers responsible for the interrogations. For example, Cambone said, the MPs could help by telling the interrogators what the prisoners were saying in their cells.

The idea, he said, was to build teamwork between the interrogators and the prison guards. Miller and others made it clear, he said, that all prisoners were to be treated humanely.

But Taguba said involving MPs in "setting the conditions" for interrogations not only violated Army regulations, but also opened the door for possible misunderstanding on the part of MPs who are trained to keep prisoners safe and secure.

Asked what allowed the abuse to happen, Taguba replied, "Failure of leadership, lack of discipline, no training whatsoever and no supervision."

The hearing unfolded less than two weeks after photos circulated around the world showing Iraqi prisoners forced by their American captors to assume sexually humiliating positions.

It also took place on a day when an Islamic militant Web site showed pictures of the apparent beheading of an American civilian in Iraq in retaliation for the prison abuse.

"Senators ... are in a virtual state of shock about the beheading," said Warner, recalling earlier concerns that the prisoner abuse could lead to retaliation.

Maj. Gen. Ronald L. Burgess, chief of intelligence for the Joint Chiefs of Staff, told Warner "there has been an increase" in threats in the days since the publication of photographs.

Sen. Carl Levin, D-Mich., asked Taguba whether he agreed with the conclusion of the International Committee of the Red Cross that coercive practices such as holding prisoners naked for extended periods had been used in a systematic way.

"Yes, sir," Taguba replied. "Based on the evidence that was presented to us and what we gathered and what we reviewed, yes, sir."

He said that investigations, which are not yet complete, have identified seven MPs and as many as 17 of their supervisors directly or indirectly involved.

The question of CIA involvement arose but was not fully clarified.

Lt. Gen. Keith Alexander, the Army's intelligence chief, testified that CIA officers "visited the facility and talked to prisoners" at Abu Ghraib. He added that he knew of "no wrongdoing on their behalf."

In his testimony, Taguba said the decision last November to take tactical control of Abu Ghraib prison away from the 800th Military Police Brigade and give it to the 205th Military Intelligence Brigade meant the MPs believed they were taking orders from military intelligence.

Cambone, however, said that move did not give military intelligence authority over the MPs, nor did it change the rules governing the activities of either the MPs or the interrogators.

Either way, Cambone told the panel that troops in Iraq were under orders to abide by the Geneva Conventions, which dictate terms for humane treatment of wartime prisoners.

Additional pictures and videotape remain in the Pentagon's possession. CBS News National Security Correspondent David Martin reports the Pentagon will show all of them to the Senate as early as Wednesday. Officials say one video shows a handcuffed prisoner beating his head against a cell door while a soldier records it with his camera; another shows a prisoner being subjected to what appears to be water torture.