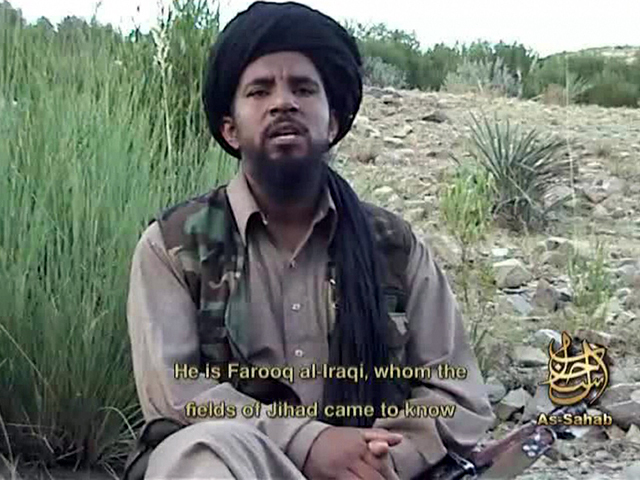 Al-Libi's death, which came on the third consecutive day of CIA drone strikes in the Pakistani tribal areas bordering Afghanistan, is a serious knock to what remains of al Qaeda's Pakistan-based core leadership.

Al-Libi was among a handful of surviving senior advisers from bin Laden's inner circle, Orr reports.

"Abu Yahya was among al Qaeda's most experienced and versatile leaders -- operational trainer and Central Shura head -- and played a critical role in the group's planning against the West, providing oversight of the external operations efforts," a U.S. official told Orr, referring to al-Libi by his first name.

Relentless drone strikes have seriously thinned the senior ranks of the al Qaeda network. In the past two years more than a dozen top leaders have been killed by U.S. strikes in Pakistan and Yemen - among them bin Laden and U.S.-born cleric Anwar al-Awlaki.

Al-Libi rose to prominence after his 2005 escape from the United States' sprawling Bagram Air Base in Afghanistan, quickly becoming a senior member of the command structure at the operation level, appearing in numerous videos at al Qaeda training camps.

He soon took on an even more senior role as a strategist and public face of al Qaeda in propaganda videos, and most recently he became second-in command to the new al Qaeda chief Ayman al Zawahiri, following bin Laden's killing May 12, 2011, by U.S. Navy SEALs.

"Zawahiri will be hard-pressed to find any one person who can readily step into Abu Yahya's shoes," the U.S. official told Orr. "In addition to his gravitas as a longstanding member of al Qaeda's leadership, Abu Yahya's religious credentials gave him the authority to issue fatwas, operational approvals and guidance to the core group in Pakistan and regional affiliates. There is no one who even comes close in terms of replacing the expertise al Qaeda has just lost."

The U.S. State Department had offered $1 million for information leading to kill or capture of al-Libi.

While U.S. officials say the terror group may no longer be capable of a large-scale strike against the United States, they caution that it remains a danger, due largely to the increasing activity of its franchise groups in North Africa and Yemen, and its lingering ties to other terror networks in the Afghanistan-Pakistan region.

Why al Qaeda is still a threat in Afghanistan

Pakistani intelligence officials told The Associated Press that four missiles were fired at a suspected hideout in North Waziristan, near the Afghanistan border, early Monday morning, killing al-Libi and about four others.

The suspected militants were reportedly gathered to honor a militant commander who had been killed in an early drone strike at the time of the attack.

Sources in the region told CBS News that local intelligence agents and residents who knew of al-Libi's whereabouts say he was injured in a May 28 drone strike and then killed in the strike Monday.

Pakistani officials were unwilling to confirm his death before it came from the U.S. military, saying the bodies found at the scene of the strike were charred beyond recognition.

The AP reported that the strike was the seventh in less than two weeks in Pakistan, where leaders have angrily and publicly demanded that the United States stop the unmanned attacks.

The strikes have continued to compound the anger of the Pakistani populace, which spiked after an errant U.S. helicopter strike left 24 Pakistani soldiers dead at a remote border post late last year.

Some analysts said al-Libi's killing on Pakistani soil will make it harder for Islamabad to demand and end to the strikes, however.

"This is one of the more prominent names" among the drones' targets, former CIA officer Paul Pillar told the AP. It "bolsters the CIA's push to continue the drone program despite the continued political resistance from Pakistan and collateral damage."

The Brookings Institution's Bruce Riedel, a former CIA officer and adviser to the White House on Afghanistan and Pakistan, agreed, calling al-Libi's death "another reason not to accept Pakistan's demand for an end to drone wars."