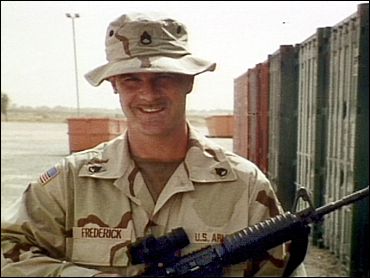 One of the Army reservists charged with abusing Iraqi detainees at Abu Ghraib prison said Monday that he will plead guilty to some offenses.

Staff Sgt. Ivan "Chip" Frederick, a member of the Maryland-based 372nd Military Police Company, said in a statement given to The Associated Press that he accepts responsibility for his actions and that he broke the law.

Frederick did not specify the charges to which he will plead guilty. He is charged maltreating detainees, conspiracy to maltreat detainees, dereliction of duty and wrongfully committing an indecent act.

He has a pretrial hearing scheduled for Tuesday in Mannheim, Germany.

Frederick, 37, is among four soldiers charged with abuse at Abu Ghraib who is facing hearings this week at a heavily secured U.S. military base in Mannheim.

On Monday, Judge Col. James Pohl rejected a defense motion to bar evidence gained from Spc. Charles Graner's computer in the abuse scandal. The defense had claimed investigators acted improperly in taking material from the laptop.

Pohl also rejected a defense motion to have the eventual trial moved out of Iraq, saying the request was premature.

As the two-day hearing began, lawyers for Graner — identified in previous testimony as the alleged ringleader — suggested he had been too tired to make a clear decision about his rights when he allowed investigators to take a computer and CDs from his quarters at the prison in January.

But Pohl rejected a defense request to bar anything found on the laptop as evidence, while stressing that the point could be raised again later once it became clear what was on the computer.

He granted a defense motion to suppress a statement by Graner, cited by an investigator who testified Monday, that "everything you want is in my computer."

Pohl also referred charges in the case against another defendant, Spc. Megan Ambuhl, back to the U.S. command in Baghdad after agreeing with the defense that two charges against her had been filed without proper investigation.

The prosecution said it would reopen her Article 32 hearing — the military equivalent of a grand jury investigation — to pursue the charges.

In developments in other abuse cases:

Nagem Sadoon Hatab, an Iraqi POW, died of strangulation last year at a holding facility near Nasiriyah, the first death of an Iraqi prisoner to be acknowledged by the U.S. military.

Reserve Sgt. Gary Pittman, of New York, is one of three men charged in the June 2003 death. He could receive more than three years in a military prison if found guilty on two charges of dereliction of duty and four counts of assault.

The accused Marines and their lawyers say Hatab died of natural causes, perhaps an asthma attack.

Pittman's military trial was set to begin Monday. More than 40 witnesses were scheduled to testify at his court-martial, which is expected to last about three weeks.

According to a fellow Marine who has been granted immunity, Pittman karate-kicked Hatab in the chest so hard that he flew three feet before hitting the floor.

Hatab, 52, had been rumored to be an official of former Iraqi President Saddam Hussein's Baath party, as well as involved in the ambush of a U.S. Army convoy that killed 11 soldiers and led to the capture of Pfc. Jessica Lynch and five others.

Within 48 hours of his arrest, a guard found a lifeless Hatab lying naked and covered in his own waste in a yard.

Hatab is among 37 Iraqi and Afghan prisoners whose deaths are being investigated. His was the only one to occur at Camp Whitehorse, outside Nasiriyah; the facility has since been closed.

Conditions there were harsh. Prisoners used cardboard boxes for toilets and prisoners slept on the floor of a stone building. During the day, the outside temperature reached 120 degrees.

Guards came from the New York-based 2nd Battalion, 25th Marine Regiment. The reservists were attached to Camp Pendleton's 1st Marine Division when they landed in Iraq.

According to pretrial testimony taken at Camp Pendleton earlier this year, none of the reservists had been trained to run a military prison.

Roy, who testified under immunity, said Pittman — who in civilian life was a guard at a New York City federal prison — karate-kicked the handcuffed, hooded man in the chest.

Maj. Clarke Paulus, who commanded the detention center at Camp Whitehorse, allegedly authorized a Marine to grab Hatab by the neck to drag him to a holding pen.

An autopsy concluded that he had seven broken ribs and slowly suffocated from a crushed windpipe.

Eight Marines originally were charged with crimes ranging from dereliction of duty to negligent homicide. However, Gallo found that while Hatab had been illegally assaulted, it could not be determined who caused his death.

Paulus faces a court-martial next month on charges of dereliction of duty and assault, and two charges of cruelty and maltreatment. He could get 5½ years if convicted. Whitehorse base commander Maj. Michael Froeder faces charges of negligence and abuse of prisoners.