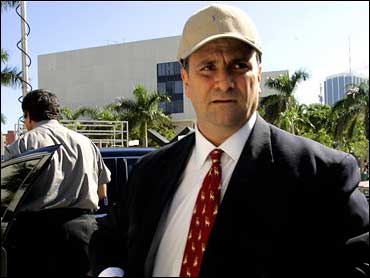 Convicted lobbyist Jack Abramoff says President Bush knew him well enough to joke with him about weightlifting. "What are you benching, buff guy?" Abramoff said Mr. Bush asked him.

The president has said he doesn't know Abramoff.

Abramoff said he finds it hard to believe Mr. Bush doesn't remember the 10 or so photos he and members of his family had snapped with the president and first lady.

"He (Bush) has one of the best memories of any politician I have ever met," Abramoff wrote in an e-mail, according to Vanity Fair's April issue being released this week. "Perhaps he has forgotten everything. Who knows?"

Abramoff pleaded guilty Jan. 4 to charges that he and a former partner, Adam Kidan, concocted a fake wire transfer to make it appear they were putting a sizable stake of their own money into a multimillion-dollar purchase of SunCruz Casinos gambling fleet in 2000. Abramoff also has pleaded guilty to charges stemming from a probe into his ties with members of Congress and the Bush administration.

"I frankly don't even remember having my picture taken with the guy," Mr. Bush added. "I don't know him."

A few days later, Abramoff wrote to Washingtonian magazine that he had met briefly with the president nearly a dozen times and that Mr. Bush knew him well enough to make joking references to Abramoff's family.

Abramoff told Vanity Fair that he once was invited to Bush's Texas ranch where he would have joined with other big Bush fundraisers. Abramoff, an Orthodox Jew, said he didn't go because the event fell on the Sabbath.

The lobbyist said that when Mr. Bush made a speech to fundraisers in 2003, he sat just a few feet from the president. Abramoff, the only lobbyist on the dais, was seated between Republican Sens. George Allen of Virginia and Orrin Hatch of Utah.

Three former associates of Abramoff have told The Associated Press the lobbyist frequently told them he had strong ties to the White House through its deputy chief of staff, Karl Rove.

Asked about the former Abramoff associates' accounts, the White House said Rove and Abramoff were leaders of a young Republicans group decades ago.

"Mr. Rove remembers they had met at a political event in the 1990s," White House spokeswoman Erin Healy has said. "Since then, he would describe him as a casual acquaintance."

According to Vanity Fair, Rove's relationship with Abramoff was deeper.

After Mr. Bush took office, Susan Ralston, Abramoff's administrative assistant, assumed the same post with Rove at the White House, where Abramoff met with Rove at least once, the magazine said.

Rove dined several times at Abramoff's former restaurant in Washington, Signatures, and was Abramoff's guest in the owner's box of the NCAA basketball playoffs a few years ago, sitting for much of the game at Abramoff's side, Vanity Fair reported.

The White House has not released any photos that Bush took with Abramoff, but acknowledged the authenticity of one that has been made public. In the 2001 photo, Mr. Bush is seen shaking hands with the leader of an Indian tribe that was an Abramoff client. The lobbyist is in the background.

Abramoff said he thought about, but decided against, selling his photos with the Bushes for money. Publications were making Abramoff offers that rose to the low seven figures, Vanity Fair reports.

He blames the Bush administration for the media attention.

"My so-called relationship with Bush, Rove and everyone else at the White House has only become important because instead of just releasing details about the very few times I was there, they created a feeding frenzy by their deafening silence," Abramoff told the magazine.

"The Democrats, on the other hand, are going overboard, virtually insisting I was there to plan the invasion of Iraq."

The Abramoff scandal may be sending shockwaves through Washington, but a CBS News/New York Times poll (.pdf) released in January shows many Americans suspect the practice of giving and taking bribes is just business as usual in D.C. An overwhelming 77 percent of those polled say it's simply how things work in Congress.

Thirty-six percent say members of both parties are equally likely to trade a vote for a bribe or a gift. Twenty-eight percent say the Republicans in Congress are most willing to take bribes; fewer than half that number, 13 percent, say the Democrats are.